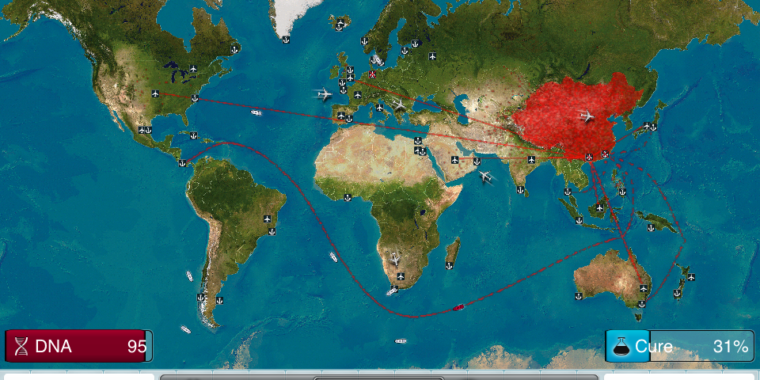 Plague Inc. maker Ndemic Creations says the game has been removed from sale on the iOS App Store in China because the relevant authorities say it “includes content that is illegal in China as determined by the Cyberspace Administration of China.”

The popular game—which asks players to shepherd a virus’ deadly spread around the world—has been available on the Chinese App Store for years without issue. Ndemic says it’s “not clear to us if this removal is linked to the ongoing coronavirus outbreak that China is facing,” but it certainly seems like the most likely proximate cause.

“This situation is completely out of our control,” Ndemic writes. “We are working very hard to try and find a way to get the game back in the hands of Chinese players—we don’t want to give up on you—however, as a tiny independent games studio in the UK, the odds are stacked against us. Our immediate priority is to try and make contact with the Cyberspace Administration of China to understand their concerns and work with them to find a resolution.”

Plague Inc. saw a spike in popularity in China and other countries following initial reports of the coronavirus outbreak. In the wake of that surge, Ndemic issued a statement last month urging players not to treat the game as a “scientific model” for the spread of any disease. Reports of new coronavirus cases are now larger outside of China than within the country, where the outbreak has been in decline since February 2.

World events aside, Plague Inc. also received an early December “Fake News” update that added “a radically different scenario which lets you create your very own Fake News story and deceive the world with it,” according to the game’s public patch notes. Industry analyst Daniel Ahmad notes on Twitter that China has in the past restricted games that “harm the public ethics, disrupt social order, or undermine social stability,” including titles that contain “false information.”

China has a long history of placing restrictions on mobile apps sold in the country, pulling everything from communication and news apps to gambling games and protest mapping tools.

Plague Inc. is still available on the App Store outside of China, where it remains a top seller, according to tracking firm App Annie. The game is also available for Android and in an Evolved version for PC and major consoles.