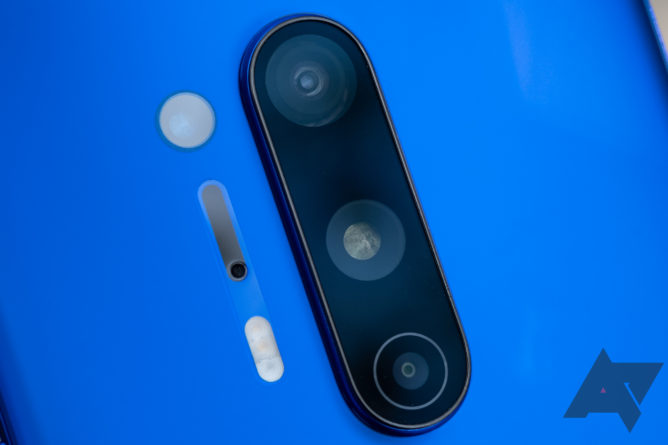 OnePlus initially claimed that the color filter camera and associated Photochrom color mode for the OnePlus 8 Pro, accused of allowing people to see through clothing, would only be disabled in China pending an undefined fix. However, an Oxygen OS update disabling the feature globally was “inadvertently” rolled out. OnePlus has since pulled the update, according to the folks at Oxygen Updater, and a subsequent OTA will re-enable the feature.

If you’re out of the loop, you can click through above to our prior coverage for more details, but the short version is that one of the cameras included with the OnePlus 8 Pro can see at least partly into the infrared spectrum, though it was only used for a single thing: a Photochrom color filter mode. After the phone was released, some folks found that color filter mode was able to see through certain types of plastic and fabric in some cases. Following that news cycle, OnePlus said it would disable the feature in Hydrogen OS (the Chinese version of its ROM). However, the company explicitly told customers it wouldn’t disable it in other markets, saying “we do not plan to disable this filter on OxygenOS, our global operating system, so we can focus on bringing the OTA to you as quickly as possible.”

Changelog for the update. Image via u/mmy3rs0876. Note that the OTA is much smaller (~125MB) if you aren’t rooted.

This accidental update, Oxygen OS 10.5.9, has but a single item in its changelog: the disabled Photochrom mode (for some reason spelled with an extra “e”). The changelog also provides a timeline for a fix, with the camera mode expected to return as soon as June.

We downloaded the update for ourselves before it was pulled via Oxygen Updater, and can confirm that the color filter camera’s Photochrom mode has been disabled and is no longer present at the end of the list of color filter modes in OnePlus’ camera app.

This change contradicts the company’s previous stance in its product forums, though a representative speaking on behalf of OnePlus tells us this wasn’t supposed to happen, providing us with the following statement:

“This OTA inadvertently went out to a limited number of devices. We will re-enable that filter in the next OTA.”

Though OnePlus didn’t respond to further questions, the Oxygen Updater developers have confirmed to us that the update has since been pulled.

In the meantime, if you liked the feature, or simply want to retain full quad-camera functionality, you might want to skip this update if your phone still sees it as available.

OnePlus has pulled this update, and the Oxygen Updater developers have confirmed that a rollout for this version has halted. Our coverage has been updated.