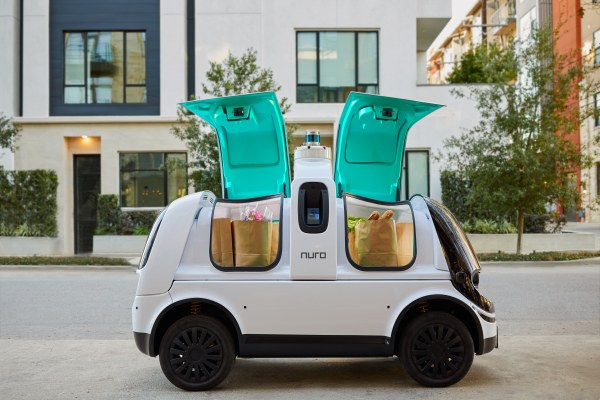 Nuro, the autonomous delivery startup that raised $940 million in financing from SoftBank Vision Fund last year, is the first company to receive a driverless exemption from the federal government.

The exemption granted by the the U.S. Department of Transportation’s National Highway Traffic Safety Administration is for Nuro’s newest — and until Thursday, unseen — low-speed electric vehicle called the R2 that will be used for local delivery service for restaurants, grocery stores and other businesses. It’s a milestone for Nuro, as well as the autonomous vehicle industry, and signals how the federal government might regulate this technology.

The R2 will soon join Nuro’s fleet of self-driving Prius vehicles in Houston, making deliveries to consumers on public roads, the company said. This deployment follows Nuro’s partnership in 2018 with Kroger to pilot a delivery service in Arizona. The pilot, which initially used Toyota Prius vehicles, transitioned to the R1 delivery bot.

Nuro’s second-generation low-speed delivery vehicle was designed to be unmanned and operates exclusively using an automated driving system. Without a human driver, the vehicle doesn’t need some of the traditional and federally required features found in passenger cars, such as side-view mirrors or a transparent windshield.

“Since this is a low-speed self-driving delivery vehicle, certain features that the Department traditionally required — such as mirrors and windshield for vehicles carrying drivers — no longer make sense,” U.S. Secretary of Transportation Elaine L. Chao said in a statement.

The federal exemption allows the vehicle to operate without three features: side-view mirrors, windshield and a rear-view camera that shuts off when driving forward. This exemption is different from the one that GM is currently pursuing for its self-driving unit Cruise. That vehicle, which is not considered a low-speed vehicle, has a much longer list of exemptions.

The process was lengthy, even for those three exemptions. Nuro has been working with NHTSA for three years and submitted its application for an exemption in October 2018.

“What you have to prove is that even if the exemption is granted the vehicle will be at least as safe as other vehicles that are fully compliant,” Nuro’s chief policy and legal officer David Estrada said.

The new R2 delivery bot has a more narrow vehicle profile and rounded contours where the side mirrors would otherwise be placed. This design feature will create additional room for bicyclists and other “vulnerable road users,” Nuro said.

The R2 is equipped with lidar, radar and cameras to give the “driver” a 360-degree view of its surroundings. However, that required another exemption, Estrada explained. NHTSA’s exemption also allows the R2 to operate its rear-view cameras even as it moves forward. New passenger vehicles must have a backup camera that switches off once the human driver begins moving forward (to avoid distraction). Without a human on-board, those concerns are moot, Nuro argued.

There are conditions to this exemption. Nuro has the exemption for two years on a conditional basis and is required to submit reports on the AV driving system and provide proper notice to communities where the R2 will be deployed. The exemption allows Nuro to produce and deploy no more than 5,000 R2 vehicles during the two-year exemption period.

The R2, which was designed and assembled in the U.S. in partnership with Michigan-based Roush Enterprises, has a more durable custom vehicle body than its predecessor and a pedestrian-protecting front end that absorbs energy and can collapse inward to better protect those outside of the vehicle, according to the company.

The vehicle also has redesigned doors and a larger exterior screen for customers to interact with the vehicle and unlock the storage compartments. It also has 65% more capacity than the R1 and its compartments  have temperature control to keep perishable goods fresh, including groceries or meals.