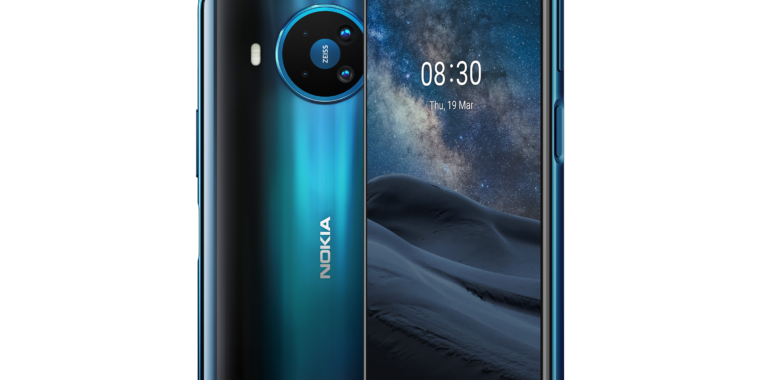 Nokia is taking the wraps off its first 5G phone, the Nokia 8.3 5G. It’s not quite a flagship (that would be the Nokia 9 Series), but it’s pretty close, and it sports some interesting design decisions in Qualcomm’s mandatory-5G world.

Instead of the Snapdragon 865 that most other 5G phones are shipping with, the Nokia 8.3 is one step down in Qualcomm’s lineup and packing a Snapdragon 765G. This is a pretty new chip, and while several phones destined for China or India have already shipped with the 765G, this will be most countries’ first taste of the chip.

Qualcomm’s SoC lineup this year isn’t as clearly segmented as it has been in years past. Despite being a cheaper chip, the 765G actually has some design advantages over the flagship 865. The 765G is Qualcomm’s first chip with an integrated 5G modem, while the 865 offloads 5G (and 4G) to a separate chip. The integration of as many components as possible into a single SoC is the technical foundation of the modern smartphone, and usually, this approach uses less space and less power, generates less heat, and is cheaper. Next year, all of Qualcomm’s 5G chips will probably be designed like the 765G, but this year, that chip is leading the way.

Don’t get me wrong, 5G is not something anyone should really care about at this point, thanks to the nearly non-existent state of the world’s 5G networks. mmWave is the 5G technology that really brings substantive speed improvements, but mmWave is only available in select cities on a block-by-block basis, and carriers have already admitted mmWave will never scale beyond cities. The other kind of 5G, sub-6GHz, has the potential for a wider rollout, but it hasn’t been significantly faster than 4G in real life.

5G is an easy sales pitch, though, so even if consumers won’t see much benefit from it, phone manufacturers are charging ahead with 5G. Qualcomm has made 5G hardware mandatory for every phone with a Snapdragon 865, even in places with no viable plans to build 5G networks. If 2020 phones have to have mostly useless 5G hardware, at least the 765G does so with fewer negative design impacts on the rest of the phone.

Nokia is making some vague claims that this phone has wider 5G compatibility than other devices. The press release says the phone has “the highest number of 5G New Radio bands from 600hmz all the way up to 3.8GHz.” This is presumably due to the phone being “the first smartphone to use the Qualcomm 5G RF Front end module solution.” With wide 5G compatibility, the idea is that the you’d be able to fly around the world and hit up the world’s nascent 5G networks, but it’s hard to know the extent of this since Nokia hasn’t published a list of supported 5G bands.

As for the other differences between the two chips, the 765G is a bit slower across the board. Both are eight-core, 7nm SoCs, but the 765G is split across two Cortex A76 cores and six A55 cores, while the 865 has four newer A77 cores and four A55 cores. The GPU gets knocked down from an “Adreno 650” to an “Adreno 620” but Qualcomm doesn’t publish enough GPU specs to really know what this means.

Other specs include a 6.8-inch, 2400×1080 LCD, 6 or 8GB of RAM, 64 or 128GB of storage, and a 4500mAh battery. There’s a microSD slot, a 3.5mm headphone jack, a USB-C port, and Android 10. The rear camera arrangement lives in a big circular camera bump with four cameras: a 64MP main sensor, a 12MP ultra-wide camera, a 2MP depth sensor, and a 2MP macro camera. The biggest oddity is a lack of an in-screen fingerprint reader, which has been difficult to integrate into LCD panels in the past. The Nokia 8.3 has a side fingerprint reader, which also doubles as a power button.