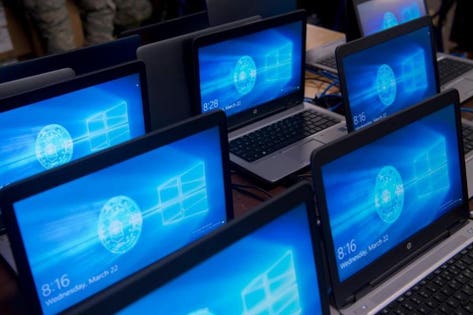 Windows 10 updates are a mess. Microsoft may still allow free upgrades, but there has been a high price to pay for users in recent months. And that price just went up.

KB4532693 is deleting user data. The update was pushed to millions of Windows 10 computers last week as part of Microsoft’s Patch Tuesday program and, while reports were initially isolated, Windows Latest reveals they are growing as installs increase, along with user frustration and anger.

02/19 Update: in surprising news, following reports of delays, Microsoft has today announced that it is making long overdue changes to Windows 10 updates. The company will introduce a new ‘Optional updates’ section for high risk updates such as new drivers (so often the cause of problems) which will go live before 5pm PST. If this sounds familiar, it should, until Windows 10 generations of Windows had the Optional updates category and it was a mystifying decision by Microsoft to remove it. It has taken almost five years for the company to fix this error, but it has the potential to dramatically improve the reliability of Windows 10 updates through greater control. That said, the Windows Update troubleshooter (link below) remains an essential in my opinion.

What happens to affected users is KB4532693 removes their Windows account, settings and files and replaces it with a temporary account. Some users have got their profiles back through uninstalling the update from this account and doing multiple restarts, but for others their data is simply gone and even using Windows Recovery to restore their computers to earlier versions has not worked.

“This update KB4532693 caused all the data on my laptop to be erased. Even after uninstalling the update, the laptop would not successfully boot. Then “Resetting” the laptop to factory settings while choosing to keep all personal data erased everything. EVERYTHING. This is a major screw up. Unbelievable.” – source

“I have no words, this just happened to me, I just came to confirm it, it’s all over the web, but it’s not just a few files, for me it was dozens of gigabytes of data, this is definitely the end of the line” – source

“It stopped me signing into Windows. Made all my programs disappear from the Desktop, Taskbar and Quick Start removed my Personal settings Wallpaper. Would not permit System Restore to work. My keyboard changed. Stopped a multitude of my programs working including email. eM Client and browser Firefox. As others have already stated all the programs I managed to get up and running failed as soon as I restarted due to the temporary status… My stress levels were nearly off the scale. Microsoft really needs to get their act together.” – source

“Count yourself lucky to have a temporary account. My Surface Pro 7 lost everything, as it’s gone and there are no extra user accounts. It will take two days to put it back to something I might want to use.” – source, which later updated: “On tech support today, second time Microsoft using Quick Assist verified that my data is definitely gone. Decided to flatten the Surface with an ISO fresh install. This time I’ll have to install my non-Microsoft backup software first. It’s good to hear I’m not alone.”

“I have just spent 5 hours trying to resolve this issue but to no avail. I have tried restoring system. Windows has forced me to change my password n codes and still it can’t log into my account.” – source

And here’s where things get worse. As users have noted above, Microsoft is aware of this issue. Windows Latest also verified this, speaking to “multiple employees” who stated the company is “actively investigating the situation.” Despite this, if you go to the official KB4532693 support page and scroll down to ‘Known issues in this update’, only a minor Windows Server bug is listed. Consequently, even diligent upgraders will walk into this one blind. Something that is a depressingly familiar situation (1,2,3,4,5,6).

As such, I would again advise users to download Microsoft’s Windows Update troubleshooter. It allows you to hide problematic updates and prevent them from reinstalling. It has never been more essential.

Ultimately, deleting user data is not new ground for Windows 10 and the latest setback comes just days after Microsoft was forced to pull another update bundled in last week’s Patch Tuesday release (KB4524244) after confirming it could cause PCs to lock up and fail to boot. The week before that Microsoft was attacked for a lack of transparency over how Windows search works.

To Microsoft’s credit, it has recently shown off Windows 10x which represents the future of Windows updates. The problem is it won’t be coming to existing PCs and long-overdue Windows 10 update improvements have recently been delayed (edit: see update above). So while Windows 10 may still be free, when it comes to updates, right now it feels like you get what you pay for.