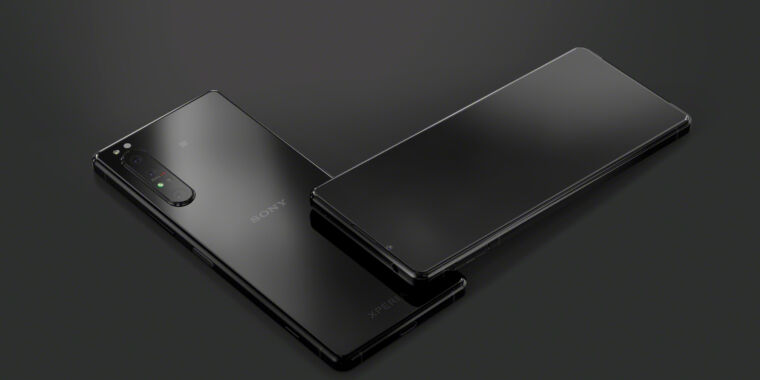 It would have been Mobile World Congress this week if not for the panic over the coronavirus—so get ready for plenty of news from the world of international smartphones. First up, we have a reminder that Sony is still out there making cellular telephones, and last night it announced the “Sony Xperia 1 II.” Wait, the what?! The “Sony Xperia One Two?” Actually, this is branded similarly to the Sony cameras, so just as the “Sony A7 III” is pronounced “Sony Alpha seven mark three,” this thing is apparently the “Sony Xperia One Mark Two.” Wild.

Like most of the phones that will be announced this week, this is a flagship 2020 smartphone with the Snapdragon 865 and 5G, though Sony opted to only include mid-band 5G and not mmWave. There is a 6.5-inch, 3840×1644 OLED display, 8GB of RAM, 256GB of storage, and a 4000mAh battery. The phone is IP68 rated, and it has a MicroSD slot and wireless charging. It may also be the only flagship smartphone in 2020 with a headphone jack.

Like every other Sony smartphone, the design is very square and rather handsome looking. While the rest of the industry is all about maximizing display space with camera notches and other display blemishes, Sony has a pair of symmetrical bezels on the top and bottom that house front-facing stereo speakers and the front camera. The combination of bezels and a 21:9 display makes this one of the tallest smartphones on the market, with measurements of 166mm×72mm×7.9mm.

On the left side, you’ll find a volume rocker and, believe it or not, a camera shutter button, while on the right side there’s a combo side-fingerprint reader and power button. On the back, there’s a vertical strip of four cameras, a 12MP main camera, a 3x, 12MP telephoto, a 12MP wide-angle, and a Time of Flight camera for 3D sensing.

Sony’s official spec sheet does not list the refresh rate for the display, so we’re going to assume it’s a bog-standard 60Hz. Faster displays are the hot, new smartphone trend in 2020. Last year, a few companies shipped 90Hz displays, and this year 120Hz OLED panels are regularly available. We’ve loved pretty much every faster display we’ve tried and find they bring big improvements to the smoothness and performance of a smartphone.

While the alignment with Sony’s camera brand seems like a minor thing, it’s novel to see a Sony smartphone that doesn’t feel like it has been cast out by the rest of the company. Sony phones have always felt like they could hugely benefit by being more closely tied to the rest of Sony, but that has just never happened for some reason.

Smartphone gaming is huge, and Sony happens to have an absolutely massive gaming division. Other than one half-hearted experiment, the company has never tried to closely tie the Playstation brand to a phone. Imagine a PlayStation Phone, or a PSP with smartphone capabilities, or exclusive AAA “Playstation” games for Sony phones. It has never really happened. Cameras are a major feature of smartphones, too, and Sony is an industry leader here as well. It produces the best smartphone camera hardware in the business and is the preferred camera vendor for Apple, Samsung, Google, and everyone else. While these companies regularly use Sony hardware and their own software to develop the industry’s best smartphone cameras, Sony has never really leveraged its camera hardware into industry-leading Xperia cameras.

Any minor attachment of the Xperia 1 II to the rest of Sony is probably too little, too late. At this point, Sony has lost the smartphone wars and—no exaggeration—hovers around zero percent market share. Last quarter, Sony sold only 1.3 million smartphones, and the quarter before that, the company hit an all-time low of 600,000 smartphone sales. For context, some companies can beat Sony’s quarterly smartphone sales in a single day. Samsung sold 79 million smartphones in Q3. Huawei sold 65 million. Apple sold 40 million.

Sony is really missing the boat by not shipping the latest display technology, but in typical Sony Mobile fashion, that’s not stopping it from charging a premium for the Xperia 1 II. The phone launches in Europe for €1,199, or about $1,300.