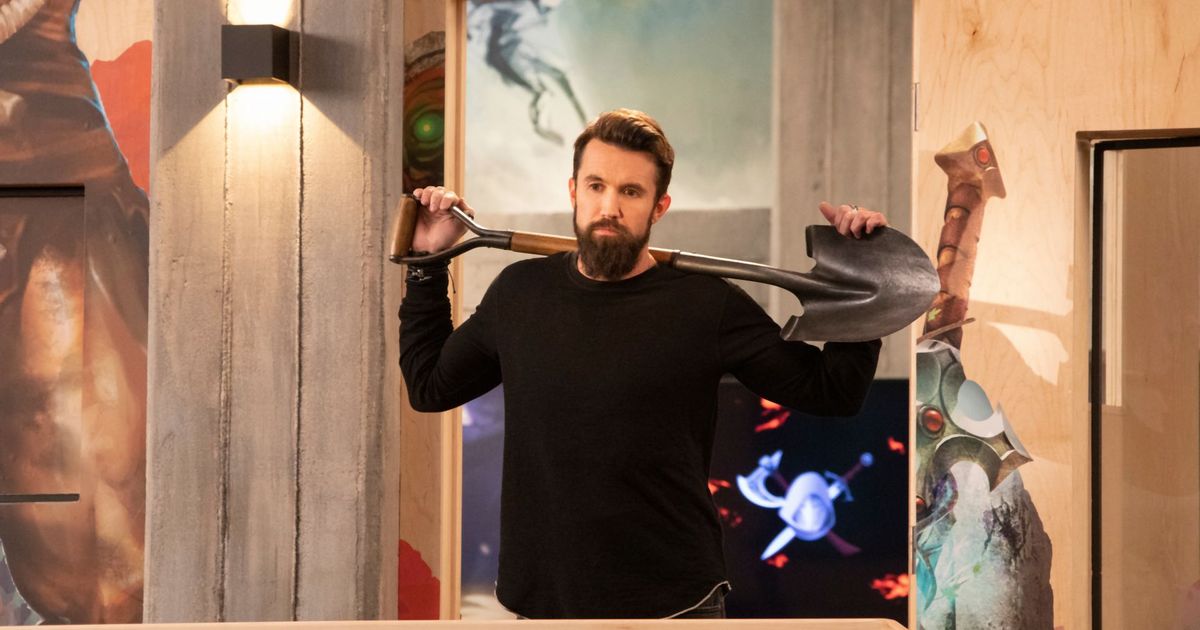 Mythic Quest is a made-for-Apple TV+ sitcom about working in video game development.

I’m sitting here, reading back over that sentence and thinking “Nothing about that description should inspire hope.” But I’m here to tell you, dear reader: Mythic Quest is good. No, that’s underselling it. Mythic Quest is great.

If you’re a fan of video games and familiar with the long history of bad-to-mediocre attempts to recreate both the games and the culture around them on TV and film, I understand your hesitation. The most concise thing I can say to reassure you video game fans out there is Mythic Quest gets it.

I don’t know if the creators get all the credit for that, but they certainly bring the comedy chops. Apple TV+’s Mythic Quest comes to us from Charlie Day, Megan Ganz, and Rob McElhenney, of It’s Always Sunny in Philadelphia fame. If you know that series well then the dickish antics of Mythic Quest, which is set in a world where almost everyone’s kind of terrible (but with heart!), should be instantly familiar.

The first season, which consists of nine half-hour episodes, follows the day-to-day existence behind the scenes at a major game studio. Mythic Quest is like a fictional WoW, what the show breathlessly describes in a fake ad as “the biggest massive multiplayer role-playing game of all time.”

McElhenney stars as Ian (pronounced EYE-ann) Grimm, Mythic Quest creative director and the biggest ego on the team by a wide margin. While the show’s success hinges entirely on the talents of an ensemble cast, Grimm’s outsized opinion of himself drives most of the key stories in this first season.

The show charts a narrative path that lends itself well to a weekly release format (which is ironic, given Apple’s decision to drop the whole season at once). Each episode can stand on its own as a sort of vignette that holds microscope up to one common thread or another in modern game development. The topics explored include everything from gender disparities in the workforce to unfair working conditions and crunch. There’s an episode about influencers and trade shows, and another about unionization.

The most concise thing I can say to reassure you games-lovers out there is Mythic Quest gets it.

By the end of the season we’ve run through what you could call a greatest hits of the Big Conversations that have unfolded in games over the years. At one point, the MQ team wrestles with Nazis in their game. There’s also some discussion of the “time-to-dick,” or how long it takes before players start drawing dicks into the game after a new feature is added.

Mythic Quest doesn’t always manage to tackle these subjects with grace, to be clear. Those who work in the industry especially may have problems with the reductive portrayals of some very real and highly problematic issues. But for a mainstream audience, it’s enough that the show says things like “crunch is bad!” and “game developers can unionize successfully!” out loud. These are things the general public knows next to nothing about.

Not to mention the fact that a more serious approach to these weighty topics would have risked undermining the whole endeavor. Mythic Quest is a comedy first. It’s here to make you laugh. And for the most part, it manages to do that without punching down or spending much time making light of things that are the cause of misery right now in the real world. Even when it does veer in that direction, the writing is sharp enough to make a thoughtful point part of the punchline.

The writing team, which includes the well-known voice actor Ashly Burch (who also stars as a quality assurance tester), clearly understands the modern culture of video game fandom. Not just the good, but the bad as well. Seeing a mainstream series play in that sandbox is thrilling if you love games, but it’s not strictly for insiders. The strength of the performances also help to keep the comedy accessible.

McElhenney is of course a well-known force, and his portrayal of Grimm as an egotistical control freak isn’t so far off from Sunny‘s Mac – though there’s also a lovely arc at play that unfolds across the whole season. Ian’s constant butting of heads with Mythic Quest lead programmer Poppy Lee (Charlotte Nicdao) is the first season’s strongest relationship.

Poppy is the sane voice inside the madhouse, a powerful, take-charge kind of woman who is constantly being undermined by the men arrayed around her… and she knows it. Her push-and-pull with Grimm leads to some of the season’s funniest moments, but Nicdao is a force in her own right. She’s not simply the studio’s “straight” woman, there to react to and heighten the comedy. Poppy has plenty of wacky on her own, and beneath that there’s also a well-developed character.

(It’s worth noting, too: The portrayal of Poppy as a brilliantly talented creator who’s constantly overshadowed by the male creator she helps prop up is itself a reflection of a real issue the games industry continues to struggle with.)

I could spend thousands of words describing each of the main characters in that kind of detail. It’s a credit once again to the Mythic Quest writer’s room that even with just five hours to weave a story, every main character feels fully realized and more complex than their one-dimensional first impressions suggest.

I just wish the ongoing stories that flit in and out of the season wove together a bit more smoothly. The vignette approach that each episode takes works for an audience raised on weekly episode drops (again, irony!), but some storylines that develop early on are left idle for long stretches of the season.

That’s a good problem to have, of course, since it’s a testament to the strength of the characters making up the show’s ensemble. But it makes investing in the ongoing story more challenging.

This becomes clear midway through the season with an episode that definitively steps away from the story of Mythic Quest, the game. The reason for that half-hour diversion is explained by the time credits roll on the final episode, but that midpoint “spin-off” episode is perhaps the season’s best. It tells a standalone story with an emotionally resonant – but still bitingly funny – beginning, middle, and end. I only wish we spent more time with those characters, too.

In case it’s not clear, I adore this show and I very much hope Apple signs off on giving us more. The nine episodes we’re already getting are a gift, but there’s still plenty of fertile ground to explore with this crew. Or not! As the spin-off episode mentioned above demonstrates, the writer’s room in general has plenty to say even without the great core cast of characters.

There have been so many failed attempts over the years to tell video game stories on TV and at the movies that “just fine” would’ve been a welcome result. But Mythic Quest is more than that. It’s a smart and thoughtful dive into a world that the bulk of the mainstream knows very little about, propelled along by characters you can’t help but love (even Ian!) and the kinds of laughs that have turned It’s Always Sunny into an unstoppable force.

Mythic Quest is my favorite new creation to come out of Apple TV+ so far, and I pray it sees the success it deserves.