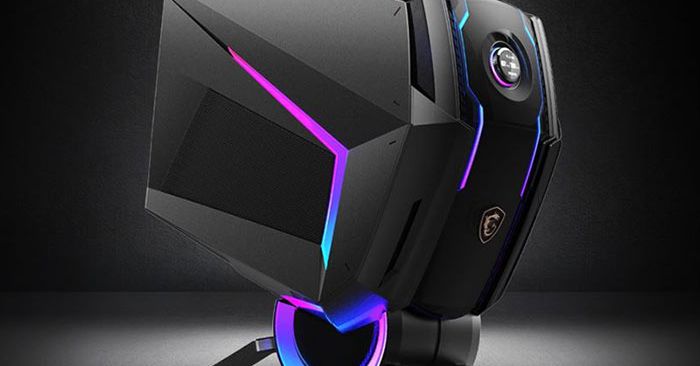 MSI’s MEG Aegis Ti5 is a new gaming PC with one of the most ostentatious cases I’ve ever seen, with a design that’s reminiscent of GLaDOS from Portal or the AI Mother from I Am Mother. It’s also got a couple of interesting bits of functionality up its sleeve. MSI boasts that the machine is the “market’s first 5G-compatible desktop,” and it also features a “Gaming Dial” — a small display on the front that can monitor and control your system.

The PC gaming market is no stranger to sci-fi inspired designs (we’re looking at you Acer), but the Aegis Ti5 is on another level. I particularly like how the machine’s bottom is elevated from the floor. It’s presumably meant to improve the airflow of the case, but when I look at it I can’t help but see a robot’s neck, ready to let the case pivot upwards to stare straight into my soul.

PC gaming enthusiasts typically eschew pre-built systems like this in favor of buying their components separately and building their machines themselves. But the advantage of a PC like this is how experimental MSI can get with it. Without an industry-standard connector it would be difficult for a third-party case manufacturer to build in a feature like the Gaming Dial, but MSI can do it with a PC like the Aegis Ti5 because it has control over everything from the case to the motherboard.

Internally, it sounds like you’ll be able to spec the Aegis Ti5 out with some unsurprisingly high-end components. MSI told Tom’s Hardware that the specs aren’t totally final, but should extend up to the latest Intel Core i9, Nvidia RTX 2080 Ti (or latest Nvidia GPU), and 128GB of RAM.

These high-end components, not to mention the super custom chassis they’re contained within, are unlikely to come cheap. An MSI rep told Tom’s Hardware that the machine could be priced at around $4,000, and may release in the third quarter of this year. That’s a pretty hefty price premium over what you’d be able to build for yourself, but at least you can sleep safely knowing your gaming setup looks like it’s being guarded by a pretty sweet robot.