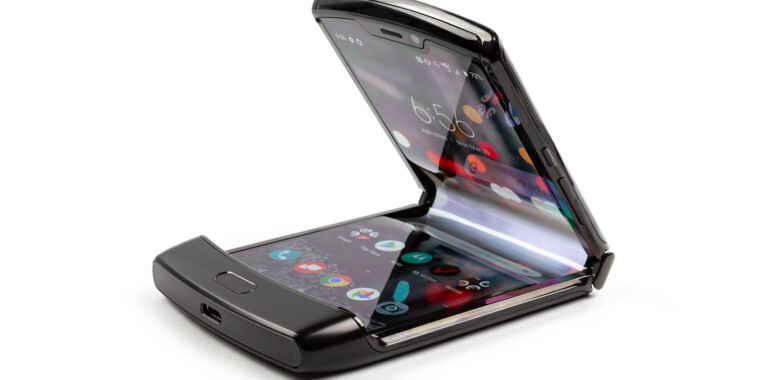 It looks like Motorola is going to take another crack at reviving the Moto Razr. Two sources now say a second-gen Moto Razr reboot is on the way, after the embarrassing public flop of the first-gen Razr reboot.

The first source is straight from Lenovo, Motorola’s parent company. During a discussion on the Reframed Tech podcast, Lenovo South Africa General Manager Thibault Dousson said “a new iteration” of the Moto Razr was on the way “in September, I think.” That’s not really the normal way to announce a new product, but it would not be the first time a Lenovo executive has taken a personal approach to product news.

Source #2 is XDA Developers, which, after nailing the specs for the first-gen Razr months ahead of launch, has a set of specs for the second-gen Razr that promise a much higher-end device.

XDA lists the second-gen Moto Razr specs as a “Qualcomm Snapdragon 765, 8GB of RAM, 256GB of internal storage, and a 2,845mAh battery.” The Snapdragon 765 will make the phone much more of a high-end device than the first-gen Razr reboot, which sported innards on par with a $400 smartphone, despite being one of the most expensive phones on the market, at $1,500. The Snapdragon 765 also means the phone will support at least sub-6GHz 5G, so this will be the first 5G Razr.

We can start ringing alarm bells now over the purported 2845mAh battery. This would be a small battery for a 4G phone and is worst-in-class for a more power-hungry 5G device. 4G smartphones with similar-sized batteries, the Pixel 4 (2800mAh) and first-gen Razr (2510mAh), already suffer from poor battery life, and piling the extra power demands of 5G on top of this doesn’t sound like a great idea. The Razr wouldn’t be a Razr unless it was very thin, though, and battery life is the primary thing you sacrifice for thinness.

Since the first Razr reboot came with around a ~$1,000 premium over a non-folding smartphone with similar specs, we’ve got to wonder what the price will be like with that spec sheet. Motorola has already announced slab phones with the Snapdragon 765, the Edge and Edge+, which clock in at ~$750 and $1,000, respectively. Other manufacturers like LG and Nokia are also pricing Snapdragon 765 phones in the $700 range. If Motorola hasn’t done anything to keep its folding smartphone costs down, we could be looking at a $1,700-$2,000 Razr.

We saw a pretty incredible amount of hype around Motorola’s first attempt at a new-age Moto Razr. Motorola was aiming to build a fashionable halo phone to revive its brand, and the aesthetic design of the phone was great, providing a modern take on the iconic flip phone. The actual execution turned the phone into a laughingstock, though. After a worrying last-minute delay, Motorola turned in an extremely fragile phone that didn’t seem like it was up to the task of day-to-day smartphone usage. The Razr body count started to pile up once the phone hit the hands of the general public. The phone died early in the metal hands of Cnet’s robotic test rig, display units in stores were quickly destroyed, Input Mag’s review unit died after a week, and our store-bought unit died during the first day.

Besides the durability issues, another Moto Razr problem was that it debuted across from a similar flexible-display flip phone from Samsung, the comparatively soulless but much more competent Galaxy Z Flip. The Z Flip showed just how bad of a job Motorola was doing, and it featured a higher-end SoC, more RAM, more storage, a bigger main display, a bigger battery, a newer OS, and a lower price tag. It also sported Samsung’s “Ultra-Thin Glass” display cover, a flexible glass-and-plastic cover that fixed some, but not all, of the problems with the purely plastic display covers flexible phones had been using.

Will the new Razr have a glass cover? The report doesn’t say. So far, only the Z Flip has used flexible glass, so it’s not clear how readily available it is to other manufacturers. Samsung reportedly had a big hand in developing the flexible glass on the Z Flip, combining materials and technology from German supplier Schott and Korean supplier Dowoo Insys, which Samsung bought a majority stake in last year. If flexible glass ends up being a Samsung Display exclusive, that still doesn’t mean it would be exclusive to Samsung-branded products. Samsung Display provides technology to most of the smartphone industry. There are also more glass vendors out there, like industry leader Corning, which has yet to jump onto the flexible smartphone bandwagon.

A September announcement would mean the second-gen Razr would be official just eight months after the first version hit the market, making it seem like a bit of a do-over for Motorola. It’s also kind of appropriate for the Razr, though. The whole idea is a throwback to the flip phone days, and in that case it’s definitely on-brand for there to be a thousand different versions of the Moto Razr.