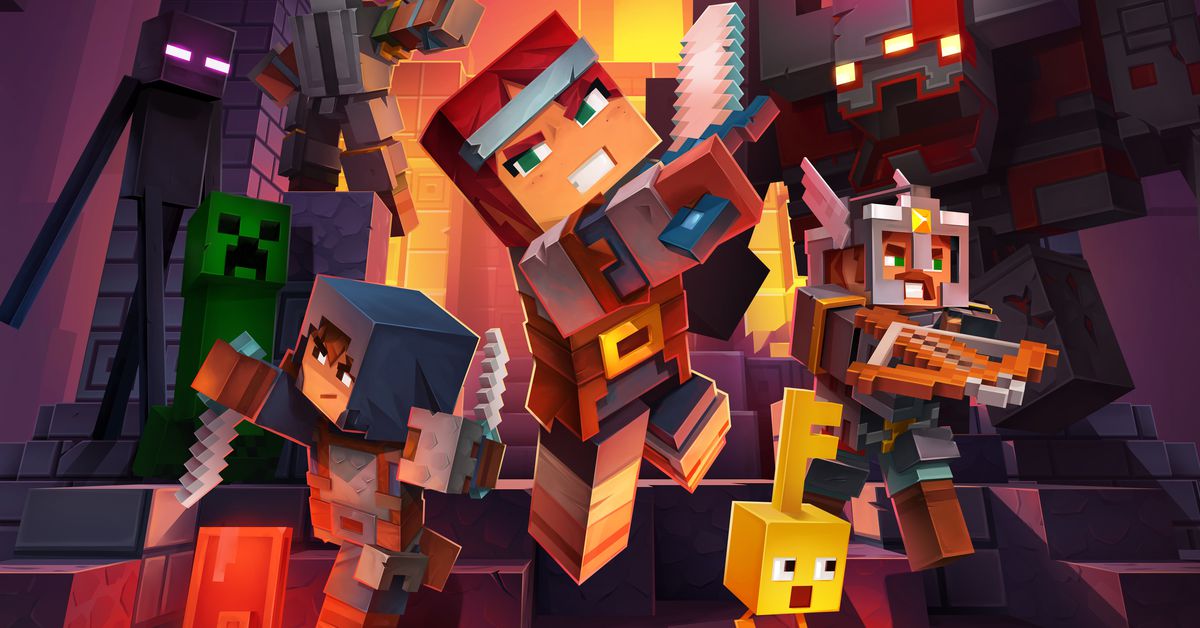 I did not expect a Minecraft game to teach my children the basics of dungeon-crawlers or loot-focused hack-and-slash games like Diablo, but here we are. Minecraft Dungeons is a simplified take on the top-down brawler, but it doesn’t lose any of the genre’s fun as it boils away all the unnecessary parts that serve to slow down more complex games.

Minecraft Dungeons isn’t simple, exactly — it’s just easy to learn and play. But that’s always been the secret to the rare, enjoyable family-friendly games from huge studios: It’s not a matter of making things easy, but ensuring that they are elegant. And this game is, above everything else, elegant. Microsoft is branching out with the Minecraft name, but doing it in such a way that brings fans deeper into the world of gaming, while effortlessly teaching some rather complicated ideas about tactics and strategy.

Breaking down how Minecraft Dungeons plays and what clever things Mojang Studios has done with the genre is only part of the story, however. This is Minecraft, through and through, filled with the sort of tiny, loving touches that make the core product such a lasting influence on gaming. There are mushrooms that play musical notes as you fight through them, and powerful bows with arrows that send their targets flying through the air.

The story is thin, but charming. There’s an evil “illager” who is doing bad things to good folks and good land, and your brave band of adventurers must fight through all his minions until you finally reach and fight him, bringing his reign of terror to an end. The campaign itself is short at launch, and should take under 10 hours for even the most diligent explorer to finish, but doing so is just the beginning. Finishing the game on the standard difficulty setting unlocks the next higher difficulty option, and you can further adjust the challenge of each individual level to increase the quality of the loot dropped by enemies.

The loot is the secret to the whole thing, because there are no character classes in Minecraft Dungeons, and very few ways to change how your avatar looks. Each player selects a design at the beginning of the game, and can only adjust that character’s aesthetics by equipping different armor and weapons. There are enough basic looks for the heroes that everyone should be able to find one that they like, but I’d still love for Mojang to add a proper character customization screen in the future.

Would you like that sword to emit a cloud of poison gas to help deal with mobs, or would you rather it increase the chances that you’ll find gems when you kill enemies? Each enchantment option has three levels of power, so choosing your gear, and then choosing how to enchant it, is the way you build out your characters.

No decision about your enchantment points is permanent, however; you can always salvage older weapons to get the enchantment points back for use in another weapon. The weapons or gear you salvage to regain those points are gone forever, although new gear is awarded at such a steady clip that it won’t feel like a loss for long in most cases. By the time these decisions get challenging, even younger players will have put enough hours into the game that they won’t be intimidated.

These changes from standard dungeon-crawlers may seem small, but they serve the goals of a family-friendly brawler very well. Most games of this type ask you to choose a character class in the first moments of the game, and you’re out of luck if you end up disliking your selection. But Minecraft Dungeons never forces that sort of do-or-die character building decision on the player.

Despite all the simplification of character builds, it was joyful to watch my children learning the basics of dungeon-crawlers, like strategies about crowd control and area-of-effect attacks. I don’t often have the chance to play games for the whole family that also give me an excuse to explain “kiting” to my children, but here we are. This is the best kind of elegance. The design doesn’t just make for a fun game; it prepares players for more complex ideas from other games in the genre.

This gives players the ability to just kind of mess around with their builds — trying different styles of weapons and experimenting with which combinations of artifacts make their character the most powerful, or the most able to heal the group or cut through the game solo. Figuring out how to use the different powers is just the first step. The challenge of fitting your gear options with the right enchantments is a puzzle that kept me happily occupied through my entire time reviewing Minecraft Dungeons with my children. We had a rhythm: No one checks their new gear until the end of each level. Then, back at camp, we take turns going through what we found and the possible enchantments, discussing what we think everyone should do, and thinking about how all our characters would fight together.

The systems are simple, but the amount of gear, the combinations of enchantments, and learning the best ways to snap it all together will keep things interesting for a long time. If Minecraft in its original form was about building structures and environments, Minecraft Dungeons is about building a fighter. There are still plenty of ways to be creative, but that creativity is expressed through your gear decisions, which turn each and every character into a custom class.

Other systems are just as simplified, without losing their inherent tension or strategic flexibility. Every player has a single healing potion, but that potion has a cooldown timer to keep players from mashing the heal button. Gear is reserved for specific players when it’s dropped, so children won’t be stuck fighting over who got the last sword or artifact. But single-use items — apples, bread, bundles of arrows — are up for grabs, forcing the team to communicate, or sulk, over who needs those items more versus who ended up getting them.

The game is easy to describe, but that doesn’t mean it’s boring. Maybe “simple” is a bad word, and “elegant” is more fitting. While it seems like Minecraft Dungeons may just be a stripped-down take on existing, more “adult” games, that attitude of paring genre conventions back to their basic forms doesn’t hurt the action itself one bit. The game is easy to understand and begin playing, with a single, effective tutorial, but players will still need to learn how to manage large groups of enemies, how to work together to share resources and plan character builds, and how to execute on their plans for each boss character with skill and precision.

The death mechanics are likewise simple, but effective at creating tension. A single dead character can be revived, while a team wipe means that a team life will be used. Once they’re all gone, you’re sent back to the camp, with any gear you picked up intact … except that you’ll have to start at the beginning of the mission again.

I made the mistake of expecting to fly through this game without having to think about what I was doing, and had to adjust my attitude a few hours into it. “Simple” doesn’t mean “easy,” despite what a lot of modern game design seems to think. My party and I were sent back to camp without finishing the mission more often than I care to admit.

We already know more dungeons are on the way, and there are plenty of features and options that Mojang can add to expand Minecraft Dungeons if it’s the hit I think it will be. But as a $19.99 release ($29.99 if you want to prepay for the two upcoming expansions and some extra cosmetic options), this is a hell of a first step into bringing Minecraft into the world of dungeon-crawlers. The game itself is a blast, sure, but my fondest memories from the past week are the times I spent with my children in the camp, going over gear and debating ideas and builds before testing them out in combat.

Microsoft and Mojang have created a game where you’re hitting endless minions and boss characters with all sorts of pointy weapons, but they did so in such a way that playing still feels creative, and freeing. That’s a very welcome magic trick from a series trying something this new, this confidently.

Minecraft Dungeons is out now on Nintendo Switch, PlayStation 4, Windows PC, and Xbox One. The game was reviewed on Xbox One X using a download code provided by Microsoft. Vox Media has affiliate partnerships. These do not influence editorial content, though Vox Media may earn commissions for products purchased via affiliate links. You can find additional information about Polygon’s ethics policy here.

Fight your way through an all-new action-adventure game, inspired by classic dungeon crawlers and set in the Minecraft universe! 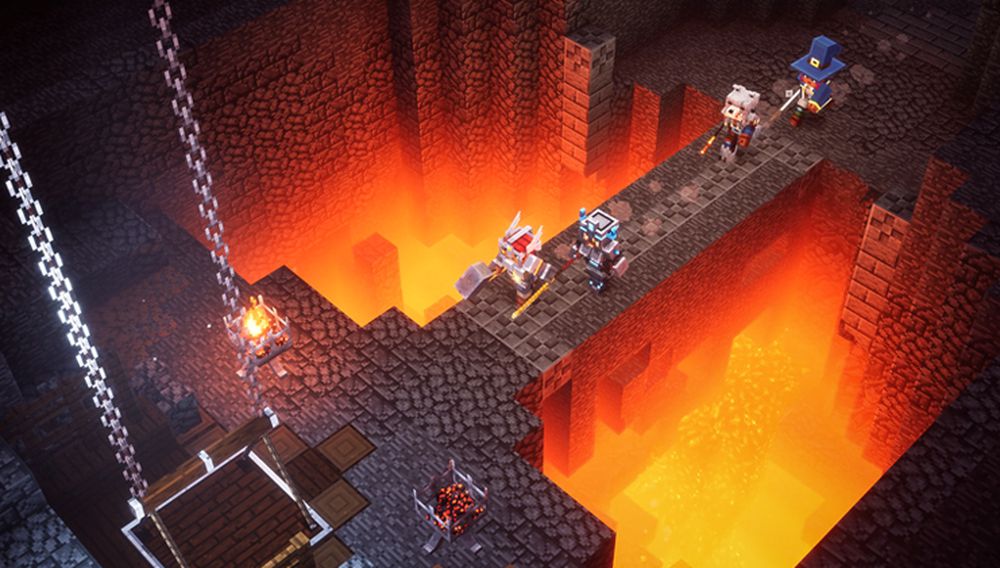