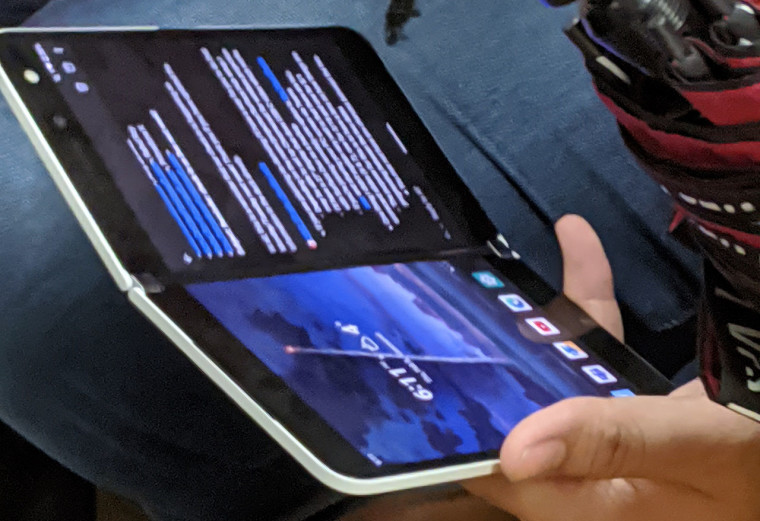 Back in October, Microsoft finally announced a Surface phone. But this phone has two screens, it runs Android, and it’s called the Surface Duo. As far as the hardware goes, Microsoft hasn’t confirmed much more than that, although the company has elaborated on the software quite a bit.

Today though, one was spotted in the wild on Vancouver’s SkyTrain. In itself, this isn’t particularly surprising. This is a smartphone in a new form factor, and it’s made by a company that has little experience making phones. That means that it has to be tested everywhere, on different networks, and in different use cases. In fact, a moving train is the perfect place for real-world network testing.

One thing that you’ll see in the image, and wasn’t known before, is that there seems to be a camera flash on top of the screen. If that’s what it actually is, and assuming that this is a near-final version of the product, then Microsoft probably isn’t putting a dedicated camera on the back of the cover. You’ll have to fold the display all the way back to use that as a rear camera.

This idea sort of makes sense. After all, there’s not much use in having a camera on the outside while the device is closed; there’d be no viewfinder. Of course, while it’s open, that’s another story.

Microsoft still says that the Surface Duo is launching this holiday season, although Windows Central’s Zac Bowden tells another story. According to Zac, this thing might arrive earlier than expected, and there’s really no reason that it couldn’t. It’s really just a smartphone with two screens and a custom launcher. Perhaps Microsoft will start seeding it to developers around the time of Build this May, for a launch later on this year.