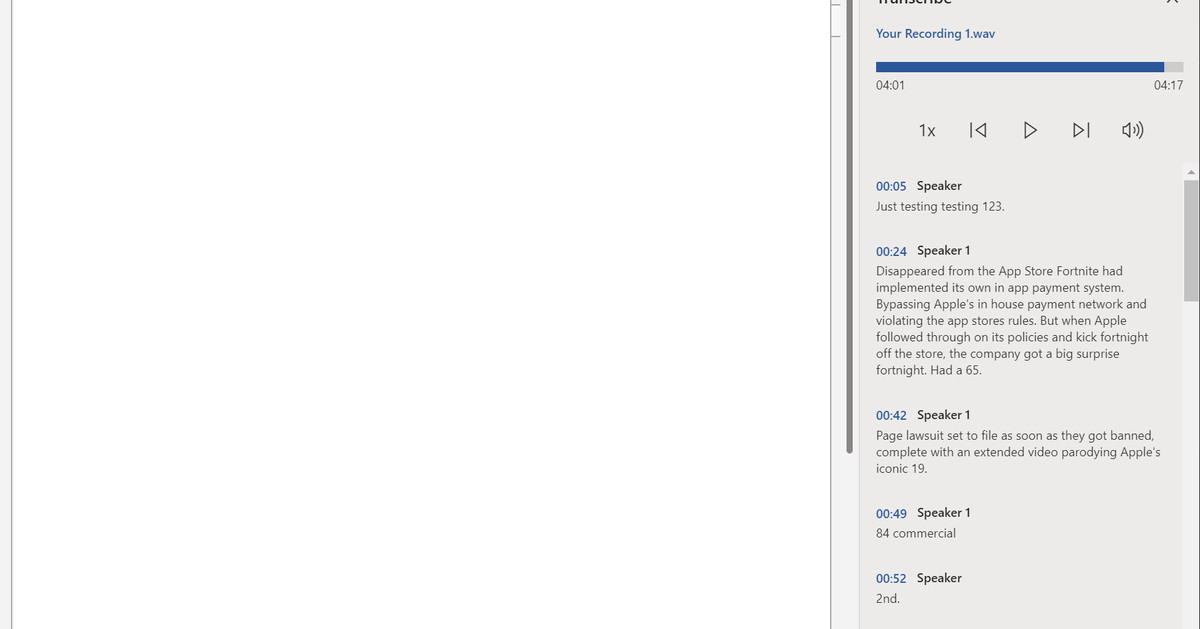 Microsoft is adding an audio transcription feature into Word for the web today. Transcribe in Word will appear in the online version of Word for Microsoft 365 subscribers, providing an easy way to automatically transcribe audio. Microsoft is supporting existing audio files, or even the ability to record conversations directly within Word for the web and have them automatically transcribed.

Once a conversation is transcribed, Microsoft’s AI will separate out each speaker and break the conversation into sections that are easy to play back, edit, and insert into a Word document. Transcribe also supports audio or video that you’ve captured elsewhere, with support for up to 200MB of MP3, WAV, M4A, or MP4 files. Processing time will obviously vary considerably if you’re uploading separate audio, but I’ve been testing the feature for recording meetings and it’s a matter of seconds for transcription to complete if you’ve been recording within Word itself.

Transcribe is launching initially on Word for the web, with plans to bring the same feature to the Word for iOS and Android apps later this year. English is the only supported language right now, but given Microsoft’s work elsewhere on transcription support it’s reasonable to assume this will expand to other languages soon. Microsoft is limiting transcription to Microsoft 365 subscribers, though, who’ll also be limited to five-hours monthly for uploaded audio, with no way to extend that transcription time for now. (For audio recorded within Word on the web, there is no transcription limit.)

That works out to only 300 minutes a month, which is half the 600 minutes that competitors like Otter.ai offer monthly free of charge. Otter also offers a similar web interface to record calls, and transcribes in real time. In my own testing I found that Microsoft’s Word Transcribe feature captures audio at higher quality than Otter, making it easier to listen back to certain parts of the transcription that need correcting. Microsoft doesn’t compress audio for Transcribe, instead it’s captured in the WAV format and uploaded directly into a new “Transcribed Files” folder in your own OneDrive storage.

It’s hard to pick between Word and Otter here, but I think if you’re used to working in Word then this new Transcribe feature makes it quicker to move from an audio file into a document. You can also take notes alongside your recording, and insert parts of the transcription once it’s complete. The only drawback is that it’s only currently available on Word for web, and not on the desktop versions of Word for Windows and macOS. Microsoft seems to be focused on the web and mobile for this particular feature, so it’s unlikely that we’ll see Transcribe appear in regular desktop versions of Word any time soon.

Update August 25th, 12:56PM ET: Added clarification that the five-hour transcription limit is only for uploaded audio, while recorded audio within Word on the web has no limit.