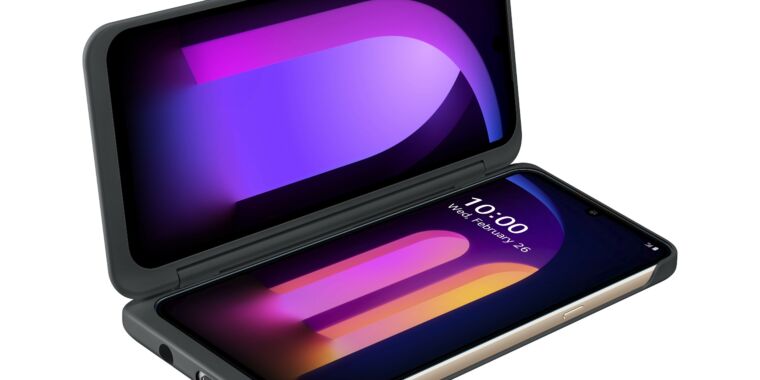 Mobile World Congress had to stay home sick this year with the coronavirus, but that’s not stopping the mobile industry from making a bunch of announcements this week. LG has announced its obligatory Snapdragon 865 smartphone: the “LG V60 ThinQ.”

Also like the LG V50, the V60 again has an optional second screen attachment, This makes the phone look a bit like a Microsoft Surface Duo without any of the striking good looks. The second screen is the same as the first: a 6.8-inch 2460×1080 OLED display, and there’s even a  2.1-inch monochrome screen on the front, which shows the time, date, battery level, and notification icons. The case is powered by the phone by plugging into the USB-C port, and for charging with the case on, you get a Mag-Safe-style magnetic charging connector. It’s kind of neat that’s it’s reversible, but it’s also a proprietary charger to worry about.

The display is only 60Hz, which puts LG behind the industry trend of offering higher-refresh-rate displays this year. Samsung is gearing up to ship a 120Hz display, while Google and OnePlus shipped 90Hz displays last year.

LG doesn’t have a price for the V60 yet, but it should be out on the big US carriers next month.

Update: I forgot to mention, there is a headphone jack.