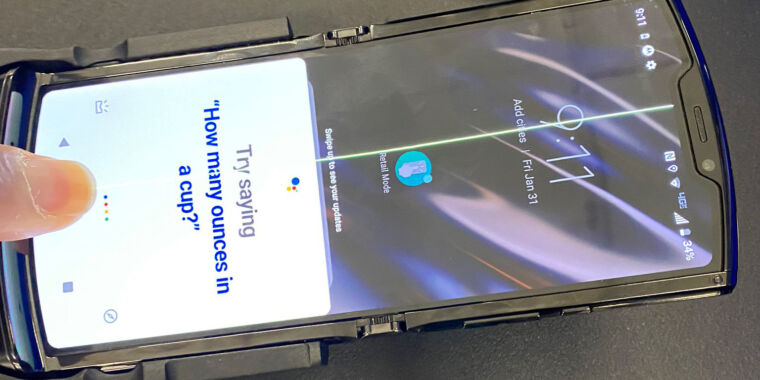 So, just how durable is the new Moto Razr? Motorola’s nostalgic, folding-display flip phone has a number of unproven features that, after the public failure of the Galaxy Fold, every potential customer should be concerned about. Evidence is starting to pile up that the Razr might be another delicate foldable that isn’t up to the task of day-to-day smartphone usage.

In addition to the same display durability issues that the Galaxy Fold had—an OLED display that has to deal with both the stress of bending and an easily damageable plastic display coating—the Razr has a trick hinge system that is a lot more complicated than that of the Galaxy Fold. In an effort to keep the display from creasing deeply, Motorola says the Razr hinge “includes moveable support plates that rigidly support the display when the phone is open but collapse out of the way when the phone is closed.” There have been a few sources now that suggest this hinge design isn’t going to last.

The first piece of evidence comes from CNET, which just wrapped up a torture test of the Moto Razr with disappointing results. CNET got ahold of SquareTrade’s Foldbot, a robot designed to open and close folding smartphones repeatedly until they die. The Galaxy Fold survived the Foldbot for 120,000 folds before the fatigue from bending destroyed the display. CNET was hoping the Razr would last for a similar 100,000-fold torture test, but Moto’s phone only lasted for about a quarter of that time. After 27,000 folds, the hinge mechanism jammed up, and the phone wouldn’t close anymore.

After a few hours in the Foldbot, the Razr’s hinge became stiffer, and the smooth-closing action was significantly degraded. The video features a gross selection of groans, pops, and grinding noises from the worn-in hinge mechanism. CNET called off the test at 27k folds when the Foldbot was unable to close the phone. Apple says the average iPhone user unlocks the phone 80 times a day, while Statista puts heavier users at between 63 and 79 unlocks per day. If we apply that data to this Razr test, more active users would have hinge problems at around the one-year mark.

While CNET only gives us a sample size of one, there are other reports that the hinge mechanism leaves a lot to be desired. There are a few videos on Twitter now of the Moto Razr hinge squeaking and creaking right out of the box. The Razr only went on sale yesterday, but in-store demo units are already taking a beating, with other videos showing flickering displays and green lines running through the display.

Motorola isn’t helping matters much either, with an official video that claims “bumps and lumps are normal” in the flexible display.

So far, every flexible-display smartphone has seen some kind of durability issue. These are still first-generation devices with a lot of bugs to work out, and with sky-high prices (the Razr, at $1,500, is on the cheaper side!), anyone buying a folding smartphone is taking on a big risk.