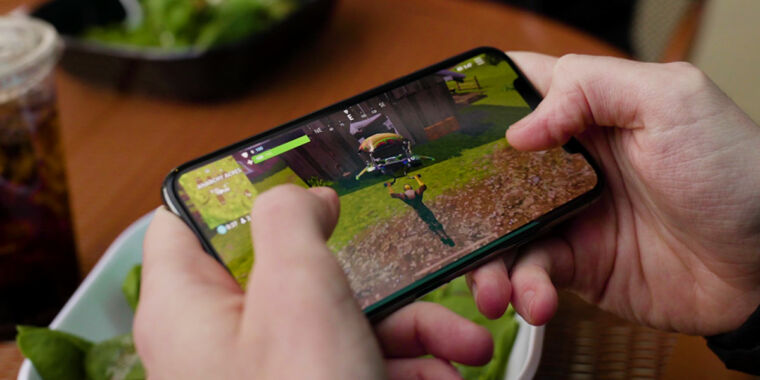 But mobile Fortnite remains blocked ahead of September hearing.

A Northern California federal judge has issued a temporary restraining order blocking Apple from going forward with plans to terminate Epic Games’ Apple Developer Program account, which would have had a major impact on the development of Unreal Engine on iOS. At the same time, the judge left in place Apple’s current blocking of Fortnite from the iOS App Store after Epic tried to insert an alternative payment platform into the mobile game.

In an eight-page ruling issued Monday night, Judge Yvonne Gonzalez Rogers largely accepted Epic’s argument that Apple’s Xcode and SDK agreement (used for development of Unreal Engine on iOS) is walled off and separate from the Program License Agreement that Epic allegedly breached with its actions regarding Fortnite.

“Apple’s reliance on its ‘historical practice’ of removing all ‘affiliated’ developer accounts in similar situations or on broad language in the operative contract at issue here can be better evaluated with full briefing,” Rogers wrote.

Moreover, in a livestreamed Zoom hearing preceding the ruling Monday night, Rogers told Apple that if it prevailed in the case, “Epic just owes you money… You don’t have to take the step of removing access [for Unreal Engine development]… With respect to Unreal Engine, that seems like an overreach.”

Even if Epic eventually wins the fuller argument on that score, it would be “too late to save all the projects by third-party developers relying on the engine that were shelved while support was unavailable,” Rogers wrote. Thus, a temporary restraining order is necessary to protect the status quo during upcoming court proceedings. “Apple has chosen to act severely, and by doing so, has impacted non-parties, and a third-party developer ecosystem,” Rogers wrote.

Judge to Epic: You’re hurting yourself

When it comes to Fortnite, however, Rogers largely accepted Apple’s argument that any current damage to Epic due to the game’s unavailability on iOS has been self-inflicted. There is currently no “irreparable harm” to Epic, Rogers wrote, because “the current predicament appears of [Epic’s] own making.”

“Your client created this situation,” Rogers told lawyers for Epic in Monday night’s hearing. “Your client does not come to this action with clean hands… in my view, you cannot have irreparable harm when you create the harm yourself.”

In her ruling, Rogers describes Epic’s “hotfix” insertion of a “Direct Payments” option in Fortnite on iOS as a “calculated decision to breach its allegedly illegal agreements with Apple by activating allegedly hidden code in Fortnite allowing Epic Games to collect [in-app purchases] directly.”

Epic can undo the harm it has incurred by simply deactivating that hotfix and restoring Fortnite to the status quo that existed earlier this month. “That Epic Games would prefer not to litigate in that context does not mean that ‘irreparable harm’ exists,” Rogers wrote.

Previewing what comes next

Monday’s hearing was primarily focused on the narrow issue of whether immediate restraining orders were needed to protect Epic from Apple’s current and planned actions. But Rogers also offered a preview of her feelings on whether Epic was likely to succeed in its legal arguments against Apple’s alleged monopoly power over the iOS app marketplace.

“Epic Games moves this Court to allow it to access Apple’s platform for free while it makes money on each purchase made on the same platform,” Rogers wrote. “While the Court anticipates experts will opine that Apple’s 30 percent take is anti-competitive, the Court doubts that an expert would suggest a zero percent alternative. Not even Epic Games gives away its products for free.”

Those arguments will continue to play out in a motion for a preliminary injunction in the case, with a public hearing set for September 28.