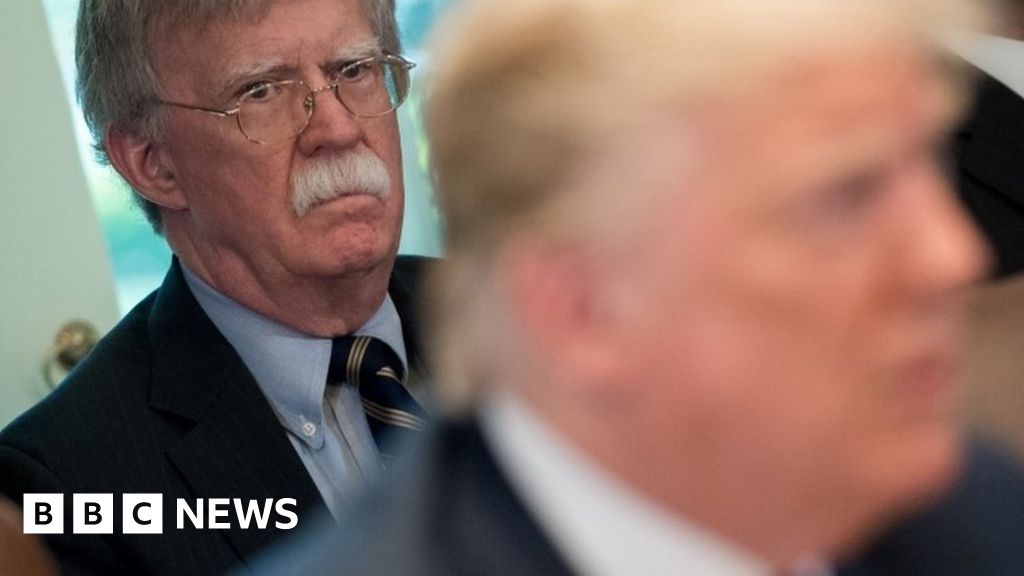 The Trump administration is making a last-ditch effort to stop the publication of a damaging new book by a former national security adviser.

The Justice Department has filed an emergency order seeking to block the release on national security grounds.

Constitutional experts say the move is unlikely to succeed and US media have already published extracts.

The new work – The Room Where It Happened – is due to go on sale on 23 June. In it, John Bolton paints a picture of a president whose decision-making was dominated by a desire to win the presidency again.

Read more on this story:

Many of the allegations are based on private conversations and are impossible to verify. The Trump administration has pushed back against Mr Bolton, with the president saying the book was “made up of lies and fake stories”.

“Many of the ridiculous statements he attributes to me were never made, pure fiction,” Mr Trump tweeted on Thursday, adding: “Just trying to get even for firing him like the sick puppy he is!”

Despite this, Mr Bolton’s book has been keenly anticipated, given his formerly high-ranking status as the president’s top adviser on security matters.

Among the book’s allegations:

Late on Wednesday, the Justice Department asked a judge for a hearing on Friday to stop the book’s release.

On Thursday night, Mr Bolton filed a motion to dismiss the lawsuit against him for “failure to state a claim”.

The Trump administration argues that publication moved forward before the book could be properly vetted.

The work “still contains classified information,” the Justice Department wrote in filing. “This means it contains instances of information that, if disclosed, reasonably could be expected to cause serious damage, or exceptionally grave damage, to the national security of the United States.”

The White House filed another lawsuit earlier in the week against Mr Bolton on similar grounds.

Ben Wizner of the American Civil Liberties’ Union wrote that any bid to halt its release was “doomed to fail”.

On one hand, the account John Bolton offers in his new book should seem somewhat familiar.

This is hardly the first time a former adviser or anonymous current aide to Donald Trump has offered anecdotes about a president seemingly uninterested in the details of governing and uninformed on basic issues of foreign policy. For nearly three-and-a-half years, there have been plentiful stories about a White House rife with backbiting and internal power struggles.

Mr Bolton’s book goes beyond this well-trodden ground, however, in painting a broad portrait of a president willing to bend foreign policy to advance his domestic and personal political agenda. This was the heart of the impeachment case congressional Democrats made against Trump in January.

Mr Bolton confirms their allegations that the president wanted the withholding of military aid to pressure Ukraine to provide damaging information about Democratic rival Joe Biden. Mr Bolton adds that Trump’s dealings with China were also done with an eye on his re-election, and that he repeatedly intervened to assist friendly autocrats around the world.

Republicans suggest this is all the work of a disgruntled employee trying to sell books, while Democrats are already growling that Bolton should have volunteered these bombshells during the impeachment proceedings. That ship has sailed, of course, but Bolton’s book can still have a bite, distracting a presidential campaign struggling to find its footing less than five months before election day.