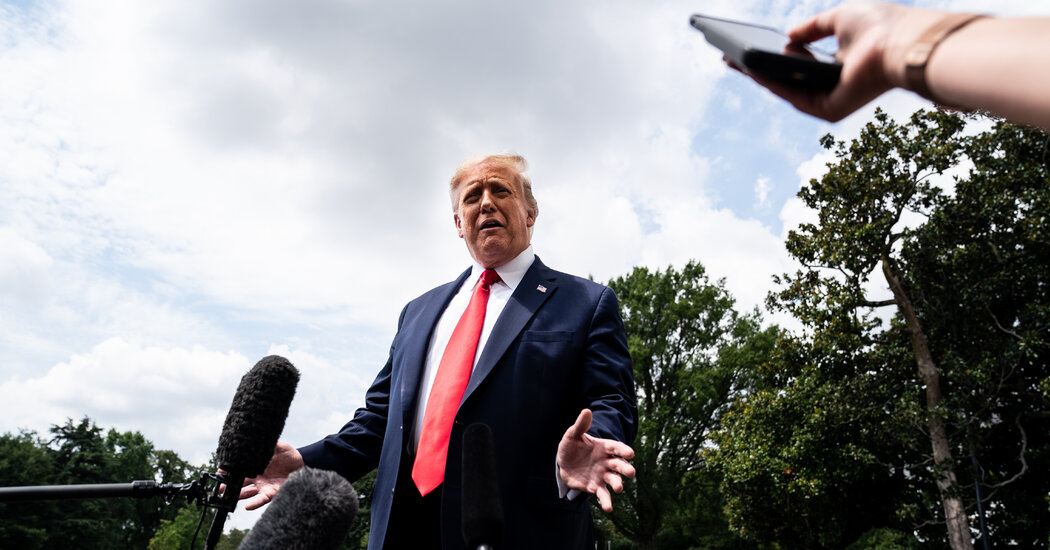 TikTok has long presented a parenting problem, as millions of Americans raising preteens and teenagers distracted by its viral videos can attest. But when the C.I.A. was asked recently to assess whether it was also a national security problem, the answer that came back was highly equivocal.

Yes, the agency’s analysts told the White House, it is possible that the Chinese intelligence authorities could intercept data or use the app to bore into smartphones. But there is no evidence they have done so, despite the calls from President Trump and Secretary of State Mike Pompeo to neutralize a threat from the app’s presence on millions of American devices.

It made little difference. When Mr. Trump issued an executive order on Thursday that would effectively ban TikTok from operating in the United States in 45 days — part of an effort to force a sale of the app to an American company, most likely Microsoft — he declared it threatened “the national security, foreign policy and economy of the United States.”

In a surprise addition, he issued a similar ban on WeChat, a Chinese social media app on which millions of people, largely outside the United States, conduct everyday conversations and financial transactions.

There is no doubt the actions by the administration are the toughest since it took steps last year to block the use of Huawei telecommunications equipment by American companies. And there is a fear running through Silicon Valley that Mr. Trump — seen as eager to punish the Chinese, and as angry at viral TikTok videos that mock him and at the app’s role in deterring attendance at his rally in June in Tulsa — is opening the door for countries around the world to declare Facebook and Google to be similar threats to their own security.

Measuring national security threats has always been tinged as much by politics as intelligence assessments: Think of John F. Kennedy’s warning of the “missile gap” with the Soviets in the 1960 election, or George W. Bush’s declaration of an imminent Iraqi nuclear ability on his ill-fated march to war 17 years ago.

Mr. Trump’s warning about the Chinese threat has been expanding: Days before the executive order, the State Department announced a “Clean Network” initiative, threatening to ban not only apps, but Chinese undersea cables, telecommunications firms that have operated in the United States for years and businesses that store information in the cloud.

Sorting out the real threats from the imagined ones is as complex as the design of the internet. But the threat TikTok poses, intelligence officials say, pales to the one created by Huawei, the Chinese telecommunications giant that was seeking to wire up the United States, Europe and much of the developing world, using the transition to 5G networks to control global communications.

“Is TikTok a problem?” Senator Mark Warner, Democrat of Virginia and the ranking member of the Senate Intelligence Committee, said on Thursday at the Aspen Security Forum.

“Yes, but on the hierarchy of problem we are talking about, an app that allows you to make funny videos” does not really rank, he said.

Huawei is a far deeper concern, Mr. Warner said, because it seeks to rebuild internet infrastructure — putting in the switches and cell towers on which American communications run. In the 5G era, that will also be the infrastructure on which manufacturing, gas supply lines, agriculture and self-driving cars operate. In a time of conflict, China could, in theory, order the systems shut down or subtly manipulated.

Even so, through much of last year, Mr. Trump talked about Huawei as a card in trade negotiations, undercutting his own aides, who were pressing allies to ban China’s products.

That has changed since the president began blaming China for spreading the coronavirus. And recent events — like the drying up of Chinese supplies for dealing with the pandemic and the crackdown by China against the pro-democracy movement in Hong Kong — have persuaded allies like Britain to reverse course and ban Huawei’s presence in their networks.

But allies seem unlikely to get as exercised about TikTok. No one is saying that it can bring the American economy or the NATO alliance to its knees — though it can lead to a lot of dinner table arguments over the time and attention it has sucked away from other things.

That does not mean there is no threat. There are worries about the location-identifying elements of TikTok, which is why the American military and intelligence agencies have banned it from official phones and discouraged its use on personal phones. There is concern about what other data it could, in theory, pull from the phones.

The White House has never discussed the underlying intelligence. The most recent C.I.A. assessment, the latest of a series, has been kept classified, though it has been widely circulated and much discussed in Washington. Now that intelligence assessment is playing a significant role in the debate over whether the way to solve this problem is for Microsoft, or another “very American” company, to use Mr. Trump’s words, to take ownership.

But the problem extends well beyond TikTok.

Mr. Trump’s move and the Clean Networks initiative are based on a belief that the United States can control its internet environment and keep it out of Chinese hands, including smartphones and the fiber-optic cables that carry data across the Pacific.

Sue Gordon, the former deputy director of national intelligence, who left last year after three decades at the C.I.A. and in other posts, said that even under the best of circumstances, a huge proportion of American data would flow across Chinese networks.

“That’s the reality of an interconnected world,” she said. “We have to learn how to live in dirty networks.”

That will remain the reality even if TikTok’s operations are sold to Microsoft. To “clean” the app, the company would most likely have to rewrite almost all of its software. And the existing code has already been downloaded more than 160 million times in the United States, and two billion times worldwide.

If Huawei’s installation of equipment around the world poses a high risk, and TikTok a comparatively low one, WeChat, according to other officials, presents a more acute — though limited — problem.

WeChat is used in the United States by, among others, one key group — Chinese-born software engineers in Silicon Valley and other high-tech work forces, according to American officials. They use WeChat to collaborate on tough mathematical, software or engineering problems, trading solutions back and forth. Proprietary data can be scooped up by Chinese intelligence services, an American official said.

A close reading of American statements makes it clear that, so far, much of the risk attributed to the Chinese apps is theoretical. Mr. Trump’s executive order on TikTok was carefully couched in the future tense.

“This data collection threatens to allow the Chinese Communist Party access to Americans’ personal and proprietary information — potentially allowing China to track the locations of Federal employees and contractors, build dossiers of personal information for blackmail, and conduct corporate espionage,” the order said.

Intelligence officials insisted the C.I.A. assessment did not mean that the app was safe or that installing it on a phone was wise. One intelligence official said he had warned his own family members not to install it, and some lawmakers also see TikTok more as a surveillance program than a way to watch dance videos.

“It’s all fun and games until the communists start data harvesting,” Senator Ben Sasse, Republican of Nebraska, said in a statement.

But the threat of TikTok has to be kept in perspective, especially given all of the personal information being sucked up, sold and shared by smartphone apps.

Christoph Hebeisen, the director of security intelligence research at Lookout, a company that focuses on the security of mobile devices, examined the TikTok app and came to a conclusion close to that of the intelligence agencies: The Chinese government does not seem to have access to the company’s data on American users, but it could probably get it if it wanted to.

But he said that he thought that was not too much different than if the American government obtained a Foreign Intelligence Surveillance Act warrant to get the data of an American social media company.