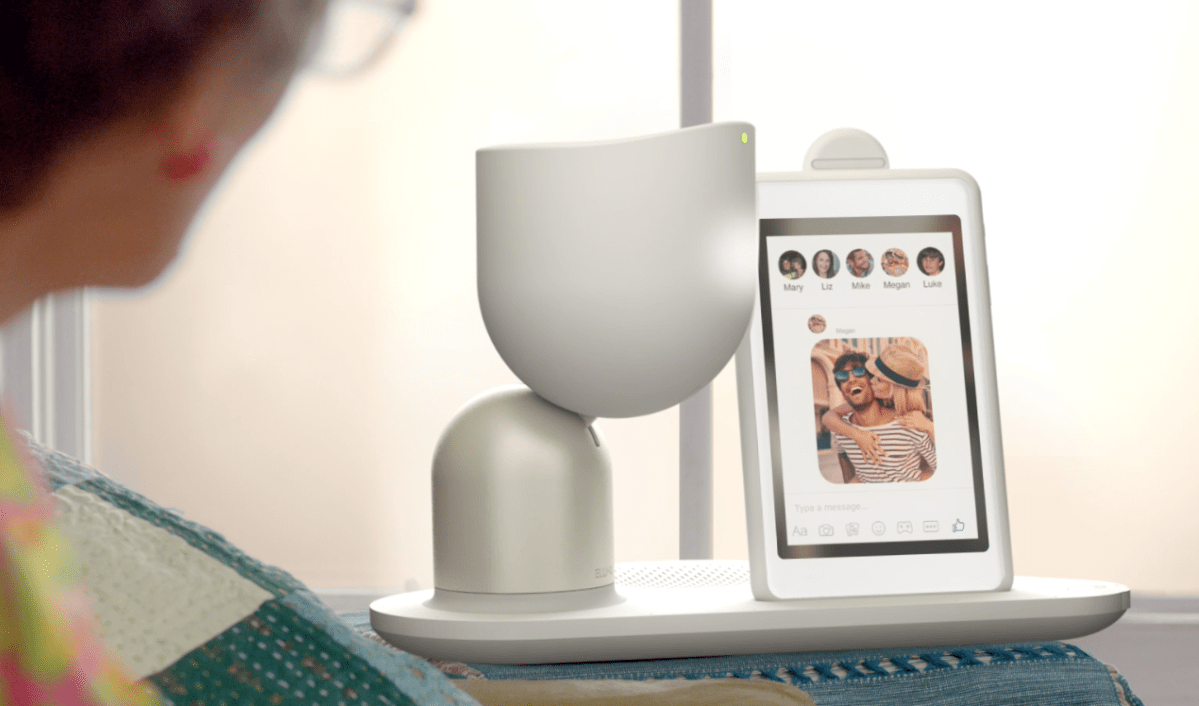 Founded in 2015, Intuition Robotics is creating what it calls “social companion” robots and related technologies, with an initial focus on reducing loneliness and isolation in elderly people. The company’s first product was a $1,500 robot called ElliQ that opened for preorders last January and has accumulated “over 10,000 days” in homes across the U.S., though the company hasn’t revealed specific sales figures. The majority of ElliQ’s users are between 80 and 90 years of age.

ElliQ more closely resembles a desk lamp than a humanoid, and it sits on a small dock with a tablet screen and cameras. It can communicate using natural language conversation and can also employ other methods to convey a message or emotion — including shifting its position and using sound and light to express itself. It also promises to improve over time as it adapts to its owner.

Above: ElliQ from Intuition Robotics

Unlike Alexa or Google Assistant, ElliQ is designed to proactively engage with users, rather than passively waiting for a prompt. It will detect if its owner is currently doing something — like having a conversation or watching TV — and leave them be. But if it suspects the person is sitting idle, it may ask them a question or suggest that they get up and go for a walk. It could also play music it knows the user likes, or tell them a joke.

Above: ElliQ is proactive and context-aware

Ultimately, Intuition Robotics sees its platform as facilitating the evolution from digital assistants to digital companions that fully understand context and can make decisions based on preset goals. ElliQ is just a demonstration of the underlying technology — last year, Intuition Robotics launched a cognitive AI platform called Q that brings the technology to third-party devices.

The company has built its cognitive AI technology entire in-house and claims that it’s protected by “dozens of patent applications.” But its customers — and the in-house team working on ElliQ — do lean on some off-the-shelf products for sensor and perception needs, such as automatic speech recognition (ASR) and text-to-speech.

The company’s first Q platform customer was an existing investor, the Toyota Research Institute (TRI), which is developing an in-car digital companion. The idea here is that drivers and passengers will be able to engage with an AI-powered agent that is proactive and context-aware. No timescale has been given for when this collaboration might yield fruit.

The company had previously raised $22 million, including its $14 million series A round from 2017 and a follow-on $6 million tranche from Samsung Next a year later. With another $36 million in the bank, Intuition Robotics said it’s now looking to expand its Q platform into other industries and use cases, though it said it’s too early to supply specific examples of additional partnerships.

“Think of use cases where a relationship would make sense and add value to a user,” Skuler added. “This can be interaction with smart devices or robots, education, hospitality, home appliances, and much more. This investment will fuel the evolution of agents from utilitarian digital assistants to full-fledged digital companions that are at our side, anticipating our needs and seamlessly, proactively improving our lives by helping us achieve certain outcomes.”

Intuition Robotics claims around 85 employees — including machine learning and computer vision experts — spread across its native Israel, in addition to hubs in San Francisco and Greece.

Sign up for Funding Weekly to start your week with VB’s top funding stories.