The latest benchmarks of Intel’s flagship and upcoming mainstream desktop processor, the 10 core, Core i9-10900K, have once again leaked out. This time, the results were posted on a Z490 motherboard and not an OEM branded LGA 1200 socketed motherboard which, providing us a more realistic look at the performance of Intel’s new chip.

Featured in the Comet Lake-S mainstream desktop family, the 10th Generation Core i9-10900K is the flagship CPU for 2020. It’s still based on the same Skylake architecture that we have received in countless revisions such as Kaby Lake, Coffee Lake, and Coffee Lake-Refresh. The process is also the same 14nm but a more refined version allowing for a slight clock speed bump and addition of more cores.

Coming to the specifications, the Core i9-10900K features 10 cores, 20 threads a total cache of 20 MB and a 125W TDP. The chip has a base frequency of 3.7 GHz and a boost frequency of 5.1 GHz. However, using Intel’s Turbo Boost Max 3.0 technology, the chip can boost up to 5.2 GHz on a single-core and what’s even better is the 4.9 GHz all-core boost. Some of the features of this particular chip include:

The latest benchmarks dug up by _Rogame show that the Intel Core i9-10900K manages to score 28940 points in the 3DMark Firestrike benchmark. This test setup includes 2x 8GB DDR4 memory running at 3200 MHz. A similar setup for the AMD Ryzen 9 3900X CPU yields a score of 30,415 points which is 5% ahead of the 10 core Intel CPU. Do note that while Intel has a massive clock advantage against AMD’s Zen 2 architecture, the AMD CPU does pack more cores and threads. 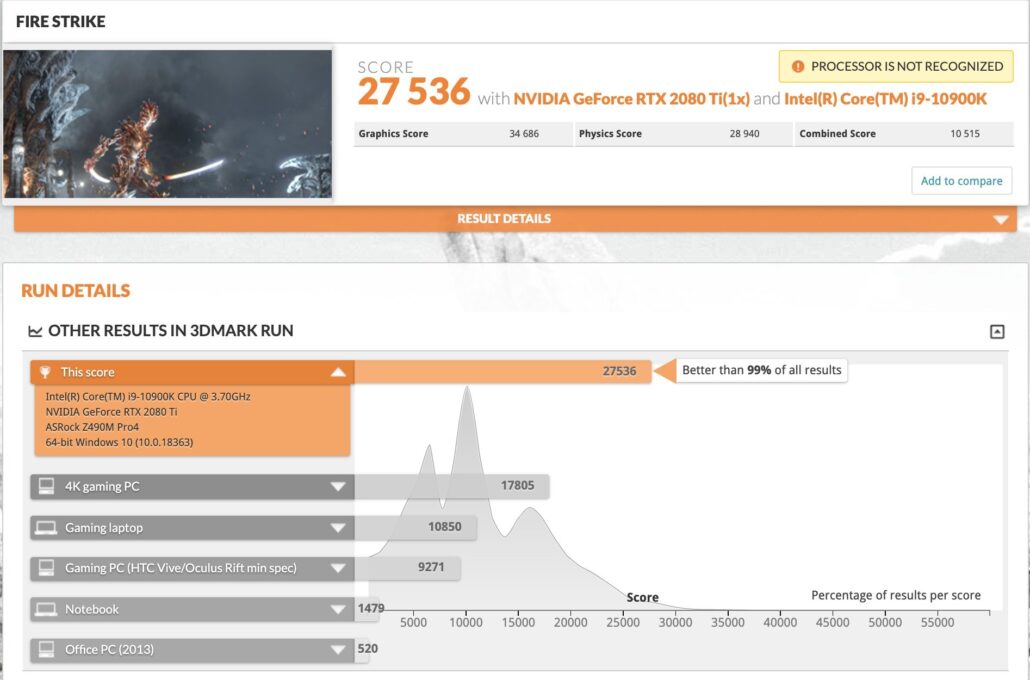 That’s not even close to the most highest-end memory configurations you can run on each of these two respective platforms so expect numbers with better memory kits to be even higher but these benchmarks do provide a nice performance baseline for users who are waiting for the Core i9-10900K. The benchmarks of the Intel Core i9-10900 (non-K) CPU also leaked a few weeks back, you can check them out here.

From the earlier benchmarks, one can conclude some pros for Intel’s and AMD’s current generation lineup which are listed below:

Once again, the power consumption and thermal figures will be much higher on Intel’s 14nm part whereas AMD’s 7nm architecture is much ahead in terms of thermals and power efficiency right now. Industry insiders and motherboard vendors themselves have stated that the Z490 boards are designed specifically for the higher power input of the Comet Lake-S lineup and they have noticed the chips breaking past the 300W barrier.

Several motherboard manufacturers revealed that the ten-core break the 300-watt mark at maximum load. Not surprisingly, the 9900KS already exceeded the 250-watt mark in scenarios of this kind. via Computebase

Pricing would play a major role in deciding the fate of the 10th Generation Comet Lake-S CPU family. With Zen 3 expected this year and AMD eating up market share in all segments, Intel really needs to rethink their CPU strategy and we hope that they can hit their process roadmap goals on time if they really want to hit AMD back. Intel’s 10th Gen Comet Lake-S desktop family and the respective Z490 motherboards are slated for launch in April 2020.

The new 10th Generation processor lineup is rumored to bring significantly lower price points at each CPU segment than the ones we have been getting so far from Intel. This is once again a much need push to reclaim some sort of relevance in the mainstream desktop segment where AMD’s Ryzen has disrupted the market share and the mind share-alike.

Which option would you prefer if you’re going to upgrade/build a PC in the coming months?

The links above are affiliate links. As an Amazon Associate, Wccftech.com may earn from qualifying purchases.


Some posts on Wccftech.com may contain affiliate links. We are a participant in the Amazon Services LLC Associates Program, an affiliate advertising program designed to provide a means for sites to earn advertising fees by advertising and linking to Amazon.com