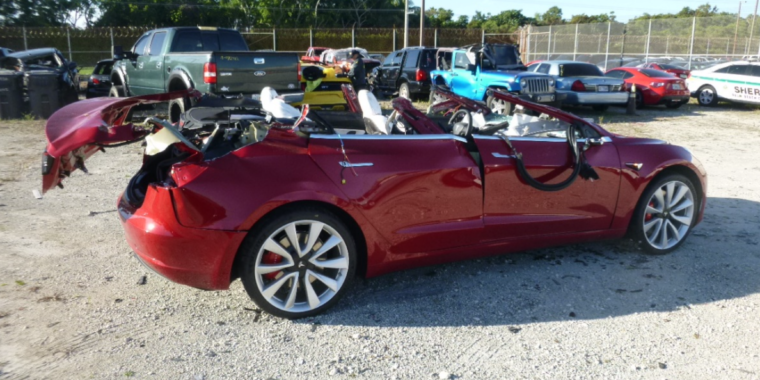 Autopilot didn’t slow down in seconds before deadly Tesla crash.

“It really looked like I had plenty of time to go across,” an anguished Florida truck driver said in an interview transcript released by the National Transportation Safety Board this week. Unfortunately, he was wrong.

Richard Wood was driving a semi truck on the morning of Friday, March 1, 2019. He pulled onto Florida’s SR 7 from a driveway, intending to make a left turn. But as he crossed to the opposite lane, a Tesla Model 3 belonging to Jeremy Banner crashed into the side of the truck. Banner’s Tesla went under Wood’s trailer, shearing off the roof and killing Banner.

The case attracted wide attention because Banner had engaged Tesla’s Autopilot technology. Not only that, the circumstances of Banner’s death were almost identical to the first Autopilot-related death in the United States: the death of Josh Brown in 2016. Brown was also killed when Autopilot failed to stop for a semi truck crossing in front of him on a Florida highway.

The truck driver’s interview transcript was one of many documents the NTSB released this week related to two fatal crashes involving Tesla’s Autopilot. I hope to go through documents related to the other crash, Walter Huang’s 2018 death, in the coming days.

“That dude didn’t make it”

The documents about Banner’s case provide a lot of new information about the circumstances of his death. Based on video footage, the NTSB estimates that the truck entered the roadway in front of Banner’s car about 4.5 seconds before the crash. Banner was traveling at almost 70 miles per hour; the truck was traveling about 10 miles per hour. Neither vehicle slowed down or took other evasive actions during those 4.5 seconds.

In fact, Wood says that initially he didn’t even realize that a fatal crash had occurred.

“I was going to take the left-hand lane and proceed on going north,” Wood said in an interview with authorities last March. “It’s a very busy intersection… It’s one of them intersections where you wonder why there isn’t a traffic light. But I’ve done it a dozen times. I clearly thought I had plenty of time.”

The crash happened just before the sun came up. Wood says he saw two pairs of headlights approaching, but believed they were far enough away that he could get across the intersection easily.

“It was dark and the cars looked like they was back further than what they was,” Wood said.

In reality, the momentum of Banner’s Model 3 carried the vehicle far down the road—apparently so far that Wood didn’t see it when he got out of his truck. Wood says it was only a few minutes later, as he saw the lights of emergency vehicles in the distance, that he realized the awful truth.

“This guy in this pickup truck come up and goes, ‘Are you the guy that drives this tractor?’ I said ‘yeah.’ And he goes, ‘That dude didn’t make it.’ I said, ‘What are you talking about?’ He goes, ‘That guy—it sheared the whole roof off his car.'”

It was only then, Wood says, that the reality of the situation fully hit him. “I went and got in the truck and I sit there until the cops got there because I was just shaking,” he told authorities.

Driver distraction is frequently a factor in situations like this, but the NTSB hasn’t identified any obvious factors impairing either driver. Wood says that he didn’t use his cell phone during that morning’s drive—a claim that seems to be backed up by cell phone records. He told investigators that he hasn’t had a drop of alcohol since 2014.

Nor did investigators find evidence Banner was impaired or distracted. “Phone records indicate that the Tesla driver was not engaged in a phone conversation and was not texting at the time of the crash,” an NTSB investigator writes. “The records also indicate that the driver did not use his phone to text or call during the three mornings prior to the date of the crash.”

“Sensors in the Tesla did not detect the driver’s hands on the steering wheel 7.7 seconds before the crash,” the NTSB reports.

It’s a safe bet that Banner wasn’t looking at the road ahead of the vehicle in the last few seconds of his life. If he had, he surely would have noticed a truck pulling out in front of his vehicle. Even if he couldn’t have fully stopped his car in the 4.5 seconds the car was pulling in front of him, Banner certainly could have slowed the vehicle down. Yet telemetry shows that the vehicle didn’t slow down at all—suggesting that neither Banner nor the Autopilot software realized that a crash was imminent.

Investigations into the 2016 Josh Brown crash revealed that (as my colleague Jonathan Gitlin wrote) “The machine learning algorithms that underpin AEB systems have only been trained to recognize the rear of other vehicles, not profiles or other aspects.” Meanwhile, some driver-assistance systems are designed to ignore stationary objects at high speeds, in part because radar-based systems have trouble distinguishing objects in the road from objects that are merely near the road. There have been multiple cases where Autopilot has steered Teslas into parked vehicles in broad daylight. It’s not clear if these issues were a factor in Banner’s death, but we may learn more when the NTSB publishes its final report.

One thing driver-assistance systems can do is to force drivers to keep their eyes on the road. Cadillac’s Super Cruise technology does just that, using a driver-facing camera to observe where a driver is looking. If Banner’s Model 3 had had this feature, he might have noticed the truck crossing in front of his path and stopped in time to save his life.