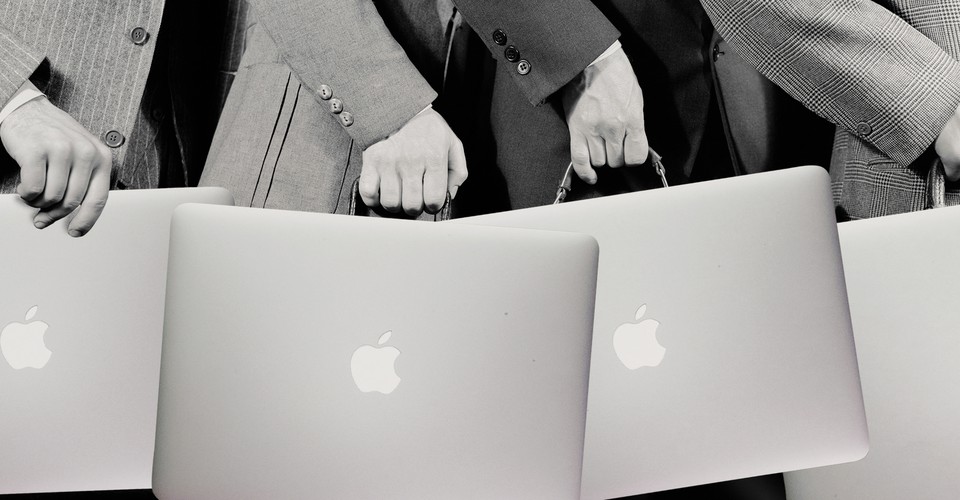 The New York City subway is a terrible place for productivity. During the morning commute, the crowds force many people to stand, one hand occupied by a pole for balance, so getting any real work done is often impossible. Riders can use their phones to browse their inboxes or draft a couple of emails, but internet access in the city’s tunnels is spotty. When you look around, people mostly are reading books, scrolling through their music libraries, playing colorful phone games, or just staring into space, disconnected.

Occasionally, though, someone violates the morning subway’s slacking-off sanctity. Earlier this week, a woman managed to find a seat next to me on the train, took out her laptop, and started plugging away at a spreadsheet. The sight filled me with dread, as it does every time I spot a fellow commuter writing code or finessing a PowerPoint presentation while I listen to podcasts. I suddenly became much more aware of the hard, thin edge of my own work computer, digging into my thigh through my tote bag.

It’s a common existential crisis among American office workers that virtually nowhere is now safe from the pull of their jobs. This inescapability is usually attributed to the proliferation of smartphones, with their push notifications signaling the arrival of emails and other workplace messages. The first iPhone, released in 2007, helped make social media omnipresent and pave the way for hyper-connected professional lives. Now, on-call retail workers and law-firm partners alike often feel as though they never really clock out.

But that blame is often applied solely to the wrong piece of take-home technology. If staying home with a cold still requires a full day of work or you can’t find a seat at your local coffee shop on a Tuesday afternoon, iPhones are not responsible for ruining your life. The novelty and early popularity of smartphones seem to have distracted America from how quickly its laptops were also dissolving much of the boundary between work and home.

You could be forgiven for not picking up on every important thing that happened in America in 2008. The economy and housing markets cratered that year, evaporating 2.6 million jobs and pushing more than 3 million homes into foreclosure. Barack Obama was elected as the country’s first black president, after an especially bitter race. Millions of people were super-into the Twilight series of young-adult vampire-romance novels. There was a lot going on.

But 2008 was also a crucial period in the construction of the tech-addled world Americans now live in. The first iPhones sold 10 million units. Google launched its first Android phone, setting up the key rivalry that still animates the American smartphone market more than a decade later. As those world-changing devices made their way into the hands of millions of curious people, another mobile gadget quietly rose to the top of its market. Some disagreement exists over whether 2007 or 2008 was the first year that laptops outsold desktops in the general market, but 2008 was the first year that American employers bought more laptops than desktops.

Read: Three theories for why you have no time

Amid the economic upheaval, there was optimism about how laptops might improve things. They were cheaper, lighter, and more powerful than they’d ever been, which meant more types of office workers could use them. The rapid availability of wireless internet meant more people could unshackle themselves from their rigid office life and daily commute. “Laptops and U.S. consumers are in the honeymoon stage,” the Los Angeles Times explained then. “Users can connect their laptops to external monitors, keyboards and mice while seated at a desk, then eject them and work from a coffeehouse, library, airplane or living room.”

At work, receiving a laptop became a status symbol. It showed that you were a person worth investing in at a regular company, or that you had found a way into the booming, then-mysterious tech industry. When I got my first office job in 2008, only upper management had laptops. The devices separated the important people from those of us who were subject to their decisions.

As laptops have kept improving, and Wi-Fi has continued to reach ever further into the crevices of American life, however, the reality of laptops’ potential stopped looking quite so rosy. Instead of liberating white-collar and “knowledge” workers from their office, laptops turned many people’s whole life into an office. Smartphones might require you to read an after-hours email or check in on the office-communication platform Slack before you started your commute, but portable computers gave workers 24-hour access to the sophisticated, expensive applications—Salesforce CRM, Oracle ERP, Adobe Photoshop—that made their full range of duties possible.

According to a recent study, Americans with college degrees and beyond—the ones most likely to start a new job and immediately be handed a laptop—spend 10 percent more time working now than they did in 1980. Those extra hours have been deeply felt: “Screen time” has become a thoroughly modern boogeyman, and to escape it, people are often advised to avoid bringing their phones to the dinner table, to stop scrolling through social media before bed, and to stay away from their email app before they’ve taken their morning shower.

But those habits won’t fix Americans’ relationship with work when their entire job comes home with them every night. More than the smartphone, laptops ended “work hours” as a concept. An office used to be a thing you went to for a certain number of hours a day; now, work is an entire plane of existence. When people fret about work invading all hours of life, what they’re really worried about isn’t the email that lets you know something needs to be done, but the expectation that they’ll start a task immediately, or continue working after they commute home. Things that might have been handled at 9 a.m. the next morning have suddenly become 9 p.m. problems.

Read: Give up on work-life balance

For young people who have never experienced professional life any other way, being constantly available and ready to put in another hour or to solve another problem is often seen as a reputational requirement, which shoves personal interests, hobbies, and goals to the periphery of people’s life and burns them out. It makes it hard to focus on cooking dinner or getting a good night’s sleep. People take their laptop on their vacations, just in case. At many companies, laptop culture creates the expectation that a real sick day is only available to the seriously hobbled; otherwise, you and your head cold better be working from home.

Laptops, of course, aren’t all bad. They remove a barrier for those who want to write, create art, make music, or develop a new skill. Laptops can be portals of procrastination, leading to hours of Bojack Horseman or YouTube makeup tutorials. Because they’re still pretty unwieldy, they don’t lend themselves to the same kind of mindless check-ins that can make smartphones so stressful. I’ve never seen anyone nearly get hit by a car because they couldn’t look up from a computer.

Even at work, laptops do deliver some of the perks with which they were sold. For people who would rather freelance than go into an employer’s office, they really do provide the flexibility that gave people so much optimism more than a decade ago. For jobs that have always required long hours, they might mean fewer nights chained to an office desk. You can wait at home for the plumber on a Tuesday without sacrificing a day of vacation time. In real emergencies, they can be invaluable.

But laptops’ biggest sin might be granting employers the convenience to treat any little hiccup like an emergency, no matter how inconsequential. Their employees don’t have much of a choice but to pull out their computers and get to work.

We want to hear what you think about this article. Submit a letter to the editor or write to letters@theatlantic.com.

Amanda Mull is a staff writer at The Atlantic.