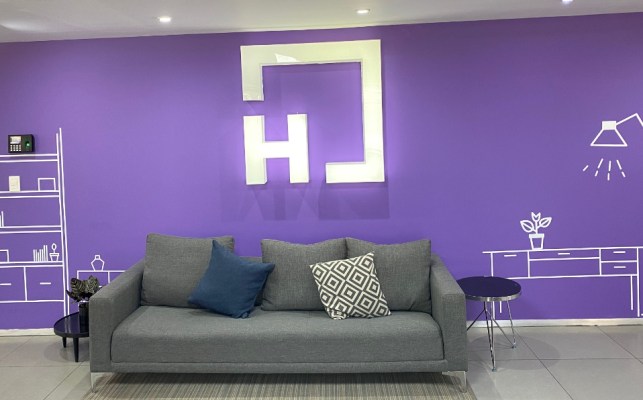 Jordi Greenham, the co-founder and CEO of Mexican long-term rentals startup Homie, has resigned after a sexual harassment investigation was carried out by the company’s ethics board.

On February 14, Homie launched an investigation into allegations of sexual harassment against Greenham, according to a corporate Facebook post. The message followed reports of sexual harassment that were posted to Facebook earlier the same day. In them, a woman, who has asked to remain anonymous to protect her privacy, claimed that CEO Greenham propositioned her in a WhatsApp message around 1:30 a.m. on February 14 to spend the night with him in exchange for 3,000 pesos (about $150 USD).

Today, Jordi Greenham Asensio, co-founder of Homie offered me money to spend the night with him. It should be noted that we do not have a personal connection and that he contacted me on LinkedIn a few months ago to offer me a job at his company, we communicated through WhatsApp to schedule the interviews and for his team to communicate with me. I carried out the process and I did not get the position and there, that is the extension of the “relationship”.

It is not correct that someone, in this case a man, thinks that it is acceptable to make these types of solicitations. It makes me angry that I delayed in saying something about this in thinking that there are no consequences for these types of actions. Attached evidence of the conversation. 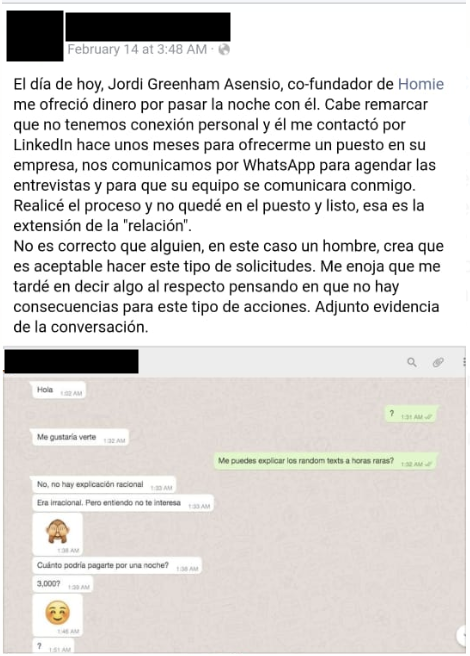 The WhatsApp exchange can be translated to English here:

Can you explain to me the random texts at strange hours?

No, there is no rational explanation.

It was irrational. But I understand that it doesn’t interest you

How much could I pay you for one night?

The woman tells TechCrunch that she met Greenham once through a mutual friend five years ago but had no contact with him since that initial introduction until he reached out to her on LinkedIn in September 2019. She told TechCrunch she had been interested in a role at the fast-growing startup, and communicated with Greenham over WhatsApp to arrange interviews and discuss the position. Ultimately, after interviewing for the role, she says she never heard back from the company.

TechCrunch reached out to both Greenham and Homie on February 21. Homie responded to TechCrunch’s request for comment on the 23rd with this statement:

On the 14th of February, the Homie Board of Directors was informed of the unacceptable behavior of the CEO and took immediate action. The Board’s Ethics Committee carried out the necessary investigation and on the 16th of February, after having discussed it internally, Jordi Greenham Asensio resigned as CEO and President of the company. The fast and unwavering action of the Board reflects our commitment for the highest standard of conduct, in all levels of the organization. The opinions and comments of Jordi Greenham no longer represent that of Homie.

Homie’s February 14 Facebook post detailed that its code of ethics deems harassment, discrimination and gender violence to be unacceptable and that those standards apply to “all levels of the organization.” 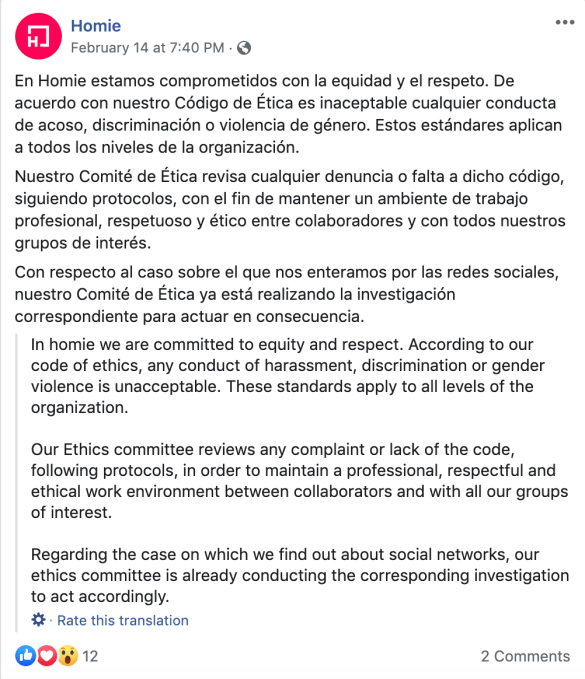 Homie, which has raised $8.2 million, is currently active in more than 100 Mexican cities. According to Crunchbase, the company employs between 100-250 people. Homie recently raised a $7 million Series A round in December 2019 led by Equity International, a fund founded by American billionaire Sam Zell.