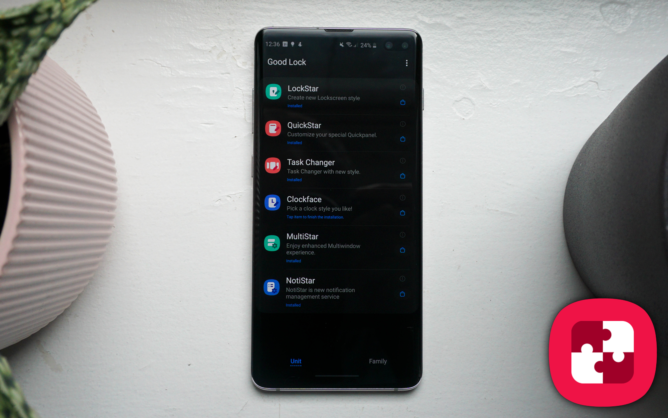 Samsung launched Good Lock back when the Galaxy S7 was the latest and greatest, and since then, it’s become a staple of the Samsung experience. Initially allowing users to test new features from future Android updates, Good Lock soon evolved into a tool for tweaking and customizing your Galaxy smartphone just the way you like it. Until now, Good Lock has been incompatible with Android 10, something rectified by Good Lock 2020. This update does far more than restore existing features, adding plenty of new options to choose from. This much variety may seem daunting at first, so let’s talk about everything Good Lock has to offer, and how to get the most out of it.

The Good Lock app itself has had some improvements before you get to any of the modules. A new splash screen, tweaked design elements to match One UI 2.0, and dark mode support to stop the app from blinding you at night. All minor changes, but together they definitely improve the experience.

My favorite additions are to Theme Park, a module that creates custom themes based on the colors in a chosen wallpaper. Initially released in December for both Android 9 and 10, it was very hit and miss — there was no dark mode support and you were limited to the colors extracted from the wallpaper. With this update, both of these problems are resolved. As well as offering suggested colors, the option to make your own in a color mixer is finally possible.

What’s more, dark mode support rectifies my main gripe with the previous version: As well as making the background of your quick settings and apps dark, you can set a different accent color to the one used in light mode. Something still missing is the ability to edit themes you’ve already made; once you’ve created one, it gets saved to the themes application, and that’s it. You can apply or delete it, but no editing. If you spot something missing after you’ve saved it, you’ll have to start from scratch to rectify it. Hopefully, this is something Samsung can address later on.

One Hand Operation +, not to be confused with Samsung’s one-handed mode, has received a big makeover, although much of the functionality remains the same. For those who aren’t familiar, One Hand Operation + adds “handles” to the sides of the screen. These handles are similar to the back gestures found in Android 10, with added functionality. You can set custom actions for swiping up, straight to the side, or down from the edge of the display. Additional actions can be assigned to long or short swipes, making One Hand Operation + one of the most customizable modules available. I’m glad to be using it again, as I’ve found it is the best way to navigate a phone as large as my S10+.

I use Samsung’s gesture system, with “gesture hints” turned off in the settings menu. This way, I can ignore the gesture system at the bottom of the screen and use this Good Lock module exclusively. Swiping diagonally up from either side opens my recent apps, straight from the left or right goes back, and diagonally down returns to the home screen. If I wanted, I could add a long swipe for Google Assistant, bring the notification shade down, or even launch a chosen app.

In the previous version, activating a gesture would show a small arrow inside a circle that followed your finger. In Good Lock 2020, three themes are available, with the preset set to “curved line,” something that looks almost identical to the animations found on Huawei devices, or apps like Fluid navigation. This theme allows you to change the fill, arrow, and outline color to meet your taste perfectly. If you don’t like it, “arrow 1” restores the previous UI where the arrow appears in a little circle, and the new “arrow 2” theme mimics the style of Android 10’s back gesture.

Task Changer modifies the overview screen, incorporating many different themes. It’s not surprising that it took Samsung this long to restore this module, as Google made significant changes to this aspect of Android. All of the themes previously found in Task Changer are here, with one new theme called Vertical Stack, which is a variation on the existing Stack theme, displaying apps as large cards that overlap one another, much like an iPhone. Vertical Stack takes this same design language and flips it from horizontal to vertical, just as the name implies. Otherwise, everything else works the same as before, offering options for “mini mode” for a better one-handed experience, background blur, and centering on the app currently in use, rather than the one beforehand. I highly recommend turning the latter on, as the animations feel more natural.

MultiStar, modifies the multitasking experience, from enabling multi-window for all apps, to choosing the color of the split-screen divider. In recent years, many users and I have missed the ability to hold down the recents key to quickly enable multi-window. Thankfully, Samsung has been able to restore this functionality, and then some. By default, holding the recents key will trigger the traditional split-screen to which most are accustomed. Dive into settings, though, and you can reassign the long-press to trigger pop-up view: small freeform windows that can be resized and minimized as needed.

Turning on Multi-Window Screen Zoom changes the DPI of the apps open in split-screen. In other words, the phone zooms out to fit as much of the app’s content in the small window as possible without sacrificing readability. It’s a subtle, but welcome addition to the roster of features. Another new feature called The Long Live App lets you whitelist certain apps from being killed by memory management, or the clear all button. I enabled this right away for YouTube Music, meaning I can’t mistakenly stop my music when I close all my open apps. I recommend Spotify users do the same.

According to the changelog provided by Samsung, LockStar is supposed to benefit from a host of changes under the hood, as well as new features such as a customizable display sleep timer for the lockscreen, and some notification improvements. By all accounts, this was supposed to be released with the other new and improved modules, but at the moment, I’m stuck with the older version that doesn’t function on One UI 2.0. Once I get the new version of LockStar installed, I’ll be sure to update this post with details.

NotiStar is a module I’ve always left switched off in the past, but now that I’ve played around with it more, I wish I’d given it a try sooner. Our phones bombard us with notifications, and sometimes pressing that clear all button is the easiest option. But what about important notifications you’ve missed? NotiStar stores notifications from selected apps in its own list, even after you’ve swiped them away from your notification shade. When I leave work and turn my data back on, my phone doesn’t stop buzzing as it tries to catch up. Dismissing it all and opening NotiStar to view the most important messages is incredibly useful. Plus, with LockStar 2020, you can add a shortcut to NotiStar on you lockscreen, with custom position, color and opacity.

QuickStar is back, enabling you to change the position of the status bar clock, or remove it altogether, as well as hide chosen status bar icons. I have missed this feature, as I always have Bluetooth on and connected to my Galaxy Watch Active 2 (what a mouthful), and I don’t like clutter in my status bar, so hiding the Bluetooth icon is a welcome option. This module is essentially the old System UI Tuner that Google killed a few years ago.

NavStar is still unavailable at this time, so you won’t be able to customize your navigation bar with custom icons and colors. It isn’t surprising either, as Google once again made many changes to Android’s navigation. Samsung says that this module is still under development, and we can expect progress soon.

Finally, Sound Assistant has some promised new features that won’t be available until the end of February, according to the same changelog provided by Samsung. Most of the changes will be in the background, improving performance and existing functionality. The only user-facing feature will be the option to move the volume UI to a vertical bar next to the volume buttons, just like stock Android. For those of us who prefer Google’s implementation, this will be a welcome change.

In years past, those of us who wanted to modify our devices had to use root or install custom ROMs that would often make the experience unstable. Good Lock is just as flexible, with the added benefit of being built into the system by Samsung. Good Lock 2020 is available now from the Galaxy Store and APK Mirror, and I hope that this dive into the app’s features will help you navigate the plethora of options available to you.