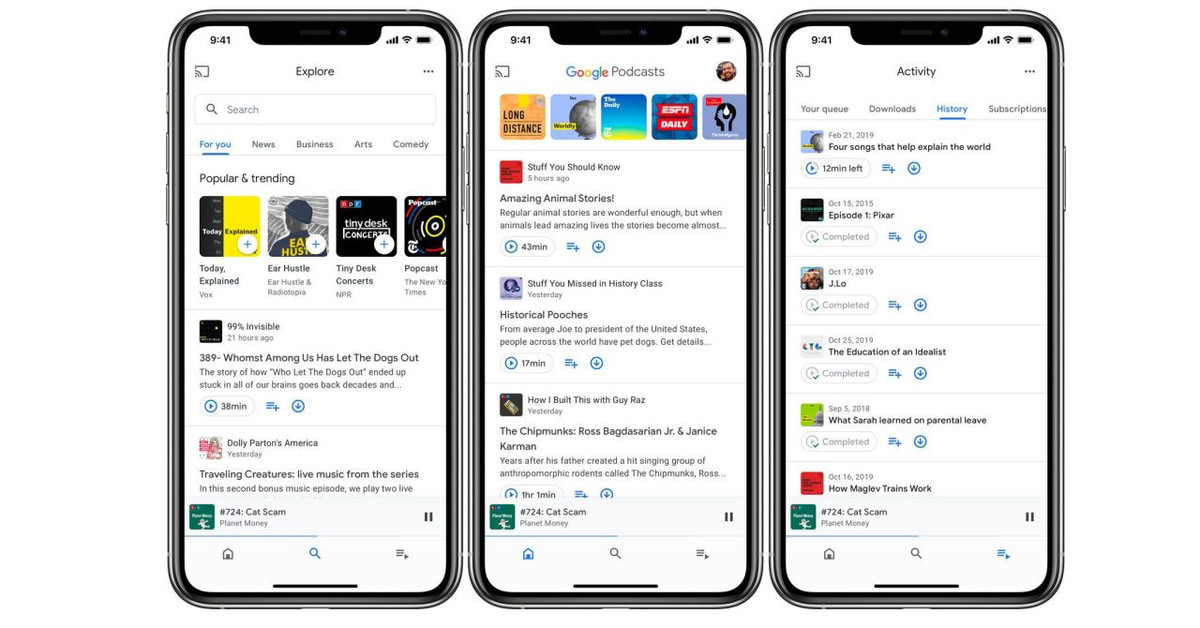 Google is starting to take its Podcasts app a bit more seriously today: the company is reportedly rolling out a more advanced design to Android users and launching the app on iOS for the first time (also featuring the new design), via Engadget. It’s a move that sets Google Podcasts up to better compete with more established podcast providers like Apple, Overcast, or Spotify.

The new design, which 9to5Google spotted rolling out early over the weekend, adds numerous features to Google Podcasts, centered on the new three-tab interface. The main Home screen is now focused on shows you already subscribe to, offering a scrollable feed of new episodes with quick links to download, play, or queue up directly from the homepage. Discovery and recommendation features have been broken out into a new tab called “Explore,” while a third “Activity” feed lets you view and manage your current playback queue, listening history, downloads, and subscriptions.

There’s also a feature that will automatically download new episodes of shows when they’re released, and support for notifications for new episode availability — critical features that other apps have offered for years.

The new focus on algorithmic recommendation is a particularly big move for Google, given that it’s been one of Spotify’s biggest advantages (through its Your Daily Podcast playlist, which aims to replicate the success of the company’s popular Discovery Weekly recommendation playlist with podcasts as well as other algorithm-curated recommendations). That said, if there’s one thing Google is good at, it’s compiling a huge amount of data on its users to recommend them new things.

It’s not just Android and iOS that are benefiting from the update; Google is also revamping Google Podcasts for Web with support for subscriptions, allowing users to sync listening progress across devices. It also gives Google a viable desktop platform to compete with companies like Apple and Spotify, which offer similar syncing features within their own native apps.

The new Google Podcasts is available now on iOS and the web, with the Android update set to roll out this week.

Correction: Google Podcasts is available now on iOS and the web, not tomorrow as this article originally stated.