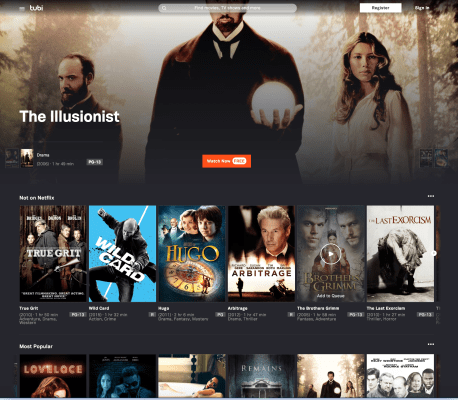 Fox Corp., the broadcast news and entertainment company holding what remains of the Murdoch Family’s television and cable sports and media assets after the sale of 21st Century Fox to Disney, has agreed to acquire the streaming service Tubi TV  for $440 million.

Tubi, once of a now-dwindling number of free ad-supported streaming services, will bring a new digitally native consumer offering to Fox with younger-skewing audience that consumes roughly 160 million hours of entertainment on the platform, according to a statement.

Available on over 25 digital platforms in the U.S. and featuring 20,000 titles and 56,000 hours of film and television from 250 content partners — including major studios — will now be able to pull from Fox’s stable of news and sports programming in addition to all that licensed television and film.

Fox said that it will integrate its digital advertising, direct-to-consumer features, and personalization technology into Tubi’s advertising platform. Fox watchers can now expect to see a deluge of Tubi ads flood their appointment watching of Neil Cavuto and Fox and Friends.

“Tubi will immediately expand our direct-to-consumer audience and capabilities and will provide our advertising partners with more opportunities to reach audiences at scale,” said Fox Corp. chief executive, Lachlan Murdoch in a statement. “Importantly, coupled with the combined power of Fox’s existing networks, Tubi provides a substantial base from which we will drive long-term growth in the direct-to-consumer area.”

Tubi’s chief executive, Farhad Massoudi, will continue to lead Tubi’s efforts and said that Fox’s relationships with advertisers and distributors would be a big boost to the company’s growth.

Fox is paying for the Tubi acquisition with money earned from its sale of the 5 percent stake it held in Roku — another ad-supported streamer. The company said it was basically exchanging a passive minority investment in Roku for full ownership and control of a leadership position in the free ad-supported streaming market.

It’ll be interesting to see how Fox adjusts programming on the service that primarily comes from Warner Bros., Paramount, Lionsgate and NBCUniversal .

With the acquisition, Fox becomes the second big old-line network to buy into the ad-supported streaming business. In January, Viacom bought the streaming service PlutoTV for $340 million.

Fox was advised by Allen & Co. on the deal, while Qatalyst Partners served as Tubi’s sole financial adviser.