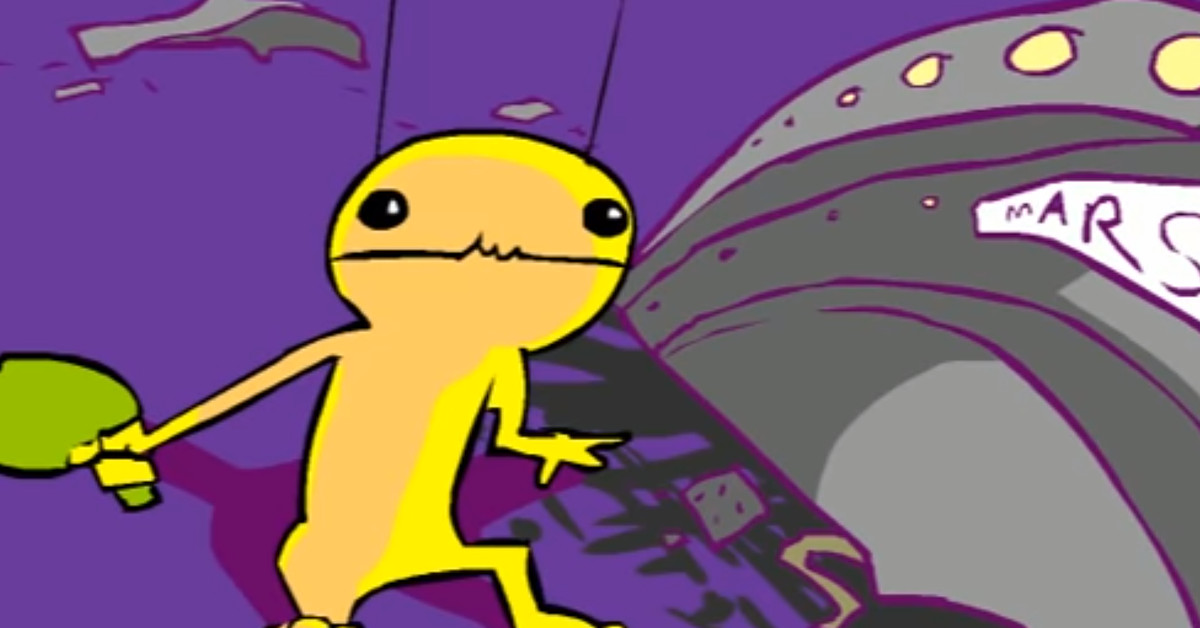 By most margins, Adobe’s Flash is already dead. In 2016, Adobe announced it was ending support for the outdated, unstable program most frequently used to create and run animations — a decision that was, according to many, long overdue. Flash will be shut down completely at the end of 2020, and most won’t even realize it’s gone. After all, Flash is already disabled by default in many browsers, like Google Chrome, Firefox, and Safari. (Apple’s never had a good relationship with Flash; the company never let Flash into the iPhone, and Apple co-founder Steve Jobs has publicly criticized the product.)

What was once necessary in creating interactive videos and games on the internet is now, at best, obsolete; at worst, it’s a security risk. There are newer, open methods for creating games, videos, and animation, stuff like HTML5 and WebGL. It’s safe to say that most people won’t miss Flash. But they will miss the era of the internet — web 1.0 — where games were free, fun, and really weird. (See: Super Meat Boy predecessor Meat Boy from 2008 or The Behemoth’s 2002 Flash game Alien Hominid.) Thankfully, a group of Flash enthusiasts heard about the shutdown and decided to do something about it. Founded by Ben Latimore, who goes by BlueMaxima online, Flashpoint is an open-source software that’s made nearly 40,000 programs, the majority of which are Flash games, available offline.

“I read an article on Ars Technica back in 2018 saying that Flash was going away,” Latimore told Polygon. “And I thought to myself, ‘Is anyone doing something about this?’ At the time, it seemed like nobody else was worried about the problem.”

Games are increasingly digital-only, and the act of preservation has shifted beyond simply saving physical copies. Increasingly, games are lost to time, whether that’s the loads of apps deemed obsolete when Apple ended 32-bit support on iOS 11 or when a game’s server shuts down. Flash and its history on the web is part of that story.

The experimental nature of Flash led to a wide breadth of games. First a program used to support web animations and other multimedia, Flash was launched in 1996. Its pick-up as a game tool wasn’t immediate; developers were already using Adobe Shockwave. Adobe Flash surpassed Shockwave in market saturation, though, and it made sense for developers to make the switch — Flash was, after all, ubiquitous. Everyone already had it.

It wasn’t only professional developers using Flash to create games; in fact, many games were made by kids and young adults just trying stuff out.

“A lot of novice developers were developing in Flash and doing experiments,” New York University Game Center professor Naomi Clark told Polygon. “That’s a big thing. When it’s easy to use a tool and if you can get access to it cheaply […] you can develop quickly and easily and just toss something online.”

Many Flash games were free, playable on whatever browser you had available, whether that was your parent’s office PC, one at the library, or in the computer lab at school. There was no real distribution process, and a publisher was not necessary.

“The key for Flash was that everyone had the plugin, because it was being used for things besides games, too,” Clark said.

If you had access to a computer, you could quickly boot up a Flash games website and start playing. Unless your school blocked the website, of course. Then you’d have to learn how to get through that, and kids did.

“Kids are just inherently smarter than adults when it comes to tech,” Anya Combs, Flash enthusiast and head of games at Kickstarter, told Polygon. “They would figure out how to bypass any sort of security and use the hour they had in the class playing games on these Flash websites.”

As the program grew, and more developers began using it to create games, Flash game portals started popping up. Sites like Kongregate, Addicting Games, Coolmath Math Games, Newgrounds, Miniclip and others hosted games, sometimes developed and uploaded by users. Other times, sites would bid for Flash games through the Flash Game License service (FGL), with the winners getting rights to host the game. After all, in the early age of advertising on the internet, there was money to be made for everyone involved. Ads — often Flash ads — ran on these sites to generate revenue.

“There was this idea — in the early 2000s — that everybody could just go to a browser and play the same game,” Corace said. “It’s not that we don’t have that now, but the ease of that, when Flash really worked, was that it was everywhere.”

These portals were the first technology to really provide free games on a mass scale. The amount of games was part of the fun — digging through the piles of quirky, crude titles to find the weird gems — and continued to bring players back to the portals each week. Addicting Games CEO Bill Karamouszis told Polygon that the site would release 20 new games per week: “Our traffic would spike,” he said. “You’d see a huge spike of people coming to the site, hitting refresh for games [to be uploaded].”

It was no big deal if a game ended being bad. You just closed the website and moved on to the next. Play that one for a while and repeat. Some games, like Line Rider and Kingdom Rush, went viral. You can see the influence these games, however simplistic, had on the industry, even today. Ubisoft’s Trials Rising is reminiscent of Line Rider’s physics-based racing; the tower defense genre really kicked up in the 2000s with Desktop Tower Defense and Bloons Tower Defense. If it wasn’t for Flash-based physics game Crush the Castle, the world may not have seen Angry Birds.

A few of the big sites, like Kongregate and Addicting Games, have been working to preserve their own most popular titles — that means converting games from Flash to HTML5. The breadth of Flash games available makes it challenging to account for everything, though. Even once-popular websites, like the Flash-heavy pet website Neopets, are struggling to convert everything over; much of the website remains broken for users with Flash turned off.

The size and spread of Flash leaves plenty of games vulnerable. If it weren’t for Flashpoint, thousands of games might have otherwise disappeared — and already have, ahead of Flash’s total shutdown at the end of this year.

“It’s not Newgrounds, it’s not ArmorGames, it’s not Kongregate you need to be worried about,” Flashpoint founder Latimore said. “There are a million other sites, smaller sites, that not only are nowhere near as popular. Those are the ones I’m most worried about, which is why I’m so happy Flashpoint got as many people working on it as possible, because there are really minor sites that I’ve never heard of, despite having this project for months, that keep popping up with really cool stuff behind them.”

Latimore describes himself as a “guiding hand” these days, with many others on the Flashpoint team working on curation. With a team of developers, Latimore created a program that’s more complex than it looks. It’s three programs that work together — a web server, redirector, and a launcher — to play the games. Together, they “pretend to be the internet,” which tricks the program into thinking it’s being run on its original server. The launcher is what the player sees, and the server loads up the fake internet. The redirector, well, directs the programs to the fake internet.

It’s a lot of work for games that might have otherwise had 50 players, at most — but Latimore said it’s not up to him to be discriminating. Right now, the team is focused on getting as many games as possible on the launcher, saving them from obscurity, before they’re lost. It’s up to the player to sort through them to see what’s good, or not. Indeed, there are a lot of games that are unplayable on Flashpoint, weird little projects that may have been a kid’s first game or a test of a feature.

But there’s plenty on there that’s endearing, a snapshot of the old web that might otherwise go forgotten. For instance, 2-XL Talking Robot Emulator, which is an emulator for an actual toy from the ‘70s. The 2-XL Robot was released by Tiger Electronics and had a bunch of tapes that were to be slotted into the robot — which was also a tape player — to create a Choose Your Own Adventure-style game.

“I played through one of the little adventures I had and I actually enjoyed it,” Latimore laughed.

Another Flash project Latimore is fond of is called ByteCamp, a compilation of student games from a Canadian summer coding camp. There are 700 games within the ByteCamp interface, all of which can be loaded and played. Latimore said a team member found it accidentally while browsing the Internet Archive — the website it was hosted on no longer exists, but all the information remained within the XML data.

“We got lucky finding this,” Latimore said. “It’s things like that, these weird little experiments, these things that kids made years ago that they might actually want to see and find [one day].”

These sorts of games are what NYU Game Center professor Clark described as a “riot in the undergrowth,” a space where games could be anything — no special equipment needed to play, and “the range of people playing those games was really diverse,” Clark said. It introduced players to very small personal games and other, more “hardcore” games.

Clark, who previously worked on Flash products for Lego and others, found in her research that kids in the Flash era were willing to try out a bunch of different games, games beyond what was considered “socially acceptable” if others knew they were playing them.

That’s why so many Flash enthusiasts and developers are eager to see the history preserved (but not all; some have asked Latimore to take games off Flashpoint, and he has). There certainly were problems with Flash and its legacy — there’s always a desire to look back nostalgically with rose-colored glasses — but what the era represented as a whole, for many people, is worth remembering. There really isn’t an ecosystem analogous to Flash games; the closest we can get is with sites like itch.io.

“It’s possible for this kind of ecosystem to exist where it’s just a wild riot of creativity and people making all sorts of things, good and bad,” Clark said. “Things that make money and things that don’t make money. There were experiments and clones of traditional games — all sorts of stuff. I worry that we’re facing some times ahead where things will get a little bit narrower.”