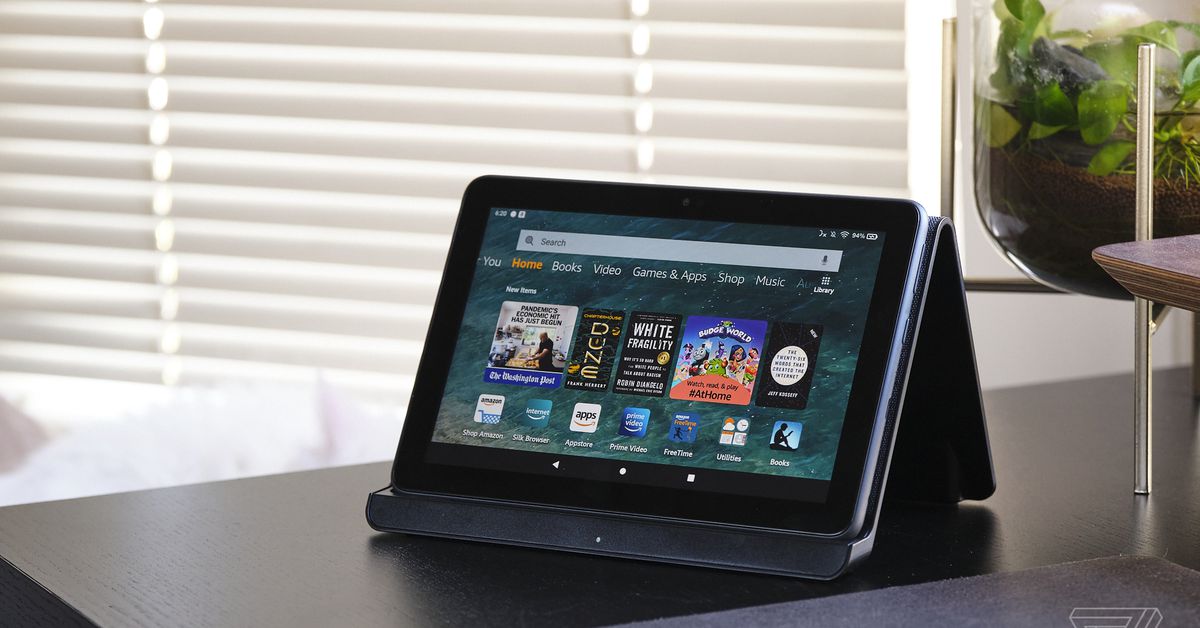 If you think of Amazon’s Fire HD tablets in the same way you approach other tablets, you’re going to be disappointed. They’re technically tablets, but the technology in them can’t keep up with the kinds of things you normally associate with tablet computers. Attempting to do all the things you might do on an iPad, high-end Samsung tablet, or a Surface is a recipe for frustration.

That’s a criticism, but more importantly it’s a context-shift. I don’t think of the Fire HD 8 Plus as a tablet. I think of it as an appliance for Amazon’s services.

The prices Amazon charges for Fire tablets are another hint that you could think of them as part of a different category than the iPad. They’re incredibly (and perhaps unfairly) inexpensive. The Fire HD 8 starts at $89.99, the Fire HD 8 Plus that I’m reviewing starts at $109.99, with the option to buy a wireless charging dock bundle at $140. You can get three Fire HD 8 Plusses for the price of Apple’s least expensive iPad.

A $110 tablet is necessarily going to have compromises, and the Fire HD 8 Plus has plenty of them. You get what you pay for. But, if in addition to the cost of the tablet you also pay $120 a year for Amazon Prime, the Fire HD gets a lot more interesting.

The Fire HD runs Fire OS, which is Amazon’s variant of Android. That makes the Fire tablets something of an anomaly, since nearly everybody else has given up on Android tablets. Only Samsung makes a serious effort with them in the US, and only a few of them are ever sold.

There are many, many reasons I could cite for the relative failure of the Android tablets, but the most telling thing I could say is that the most successful Android tablets only made sense because they worked like big phones. That’s essentially how the Fire HD tablets work, too. None of the apps you’ll use on it look or act any differently than they would on your phone.

Amazon’s take on Android is to make it a portal to Amazon’s services. Instead of Google’s app store, you get Amazon’s. Fortunately, it has the major apps that this kind of device needs to have to be successful: Netflix, Hulu, Showtime, Spotify, and so on. It doesn’t have a proper YouTube app, however, only a shortcut to the web app. It works, but it’s not the same as what you get on a phone.

(I should apparently disclose that there is also a Verge web app shortcut, as I was surprised to see the option to “install” it during the initial setup process.)

Move beyond those content-consumption apps and into the games library and you’ll find a lot more dross and a lot less premium content than you would in the Google Play Store. And if you’re interested in productivity apps, it’s even worse. You can hack your way into getting Google apps onto the Fire tablet, but it’s a hassle.

Fire OS also has a unique take on the home screen: there are a bunch of tabs you can swipe through, each dedicated to an Amazon-centric service. And truly, this is why you really would consider getting a Fire HD tablet: consuming content, specifically Amazon’s content.

It’s easy to forget just how much stuff Amazon includes with a $120-per-year Prime subscription. It’s enough to make anything beyond the faster shipping feel “free.” I know lots of people who will spend 45 minutes trying to find a “free” option in Netflix rather than pay four bucks to rent a movie. If that’s you and you’re a Prime subscriber, the library of content Amazon has for you is impressive.

There’s Amazon Prime video, of course, which includes both Amazon’s originals and a really solid set of licensed movies and TV shows (shout out to the wholesome USA series from the mid-2000s, Psych and Burn Notice).

There’s Prime Music, a totally respectable, Pandora-radio style music service. It’s no Spotify or Apple Music, but it does the job.

There’s Amazon Photos, a totally respectable photo bucket in the cloud. It’s not as full featured as Google Photos, but it does integrate better with Alexa.

There’s Prime Reading, a set of free books you can get for the Kindle. I haven’t found a lot to love in those offerings, but with enough digging you could land on something. Since I’m a heavy Kindle user, it’s nice to have my whole library here as well.

All that is great, but unfortunately there’s a dark side to all that Amazon content: all the Amazon upsells. In Prime Video, Amazon may try to get you to sign up for a cable channel through its interface. There’s a premium version of Prime Music, more storage you can buy in Amazon Photos, a Kindle Unlimited subscription for a larger library of books, Audible, and subscriptions to various newspapers and magazines.

Ads for all of the above are all over the home screens of the Fire HD. You can remove those ads — for a $15 upsell charge, of course. Navigating the interface can feel like playing whack-a-mole with subscription services, only you’re avoiding them instead of trying to hit them. And I haven’t even mentioned that the literal Amazon Store is one of those tabs, making it dangerously easy (for me, anyway) to suddenly just start shopping.

But, and I cannot emphasize this enough, this is a $110 tablet that gives Prime subscribers many hundreds of hours of premium video content. Is it a slow tablet? Yes, but that doesn’t matter if all you’re doing is taking an extra few seconds to start up the video stream or open a Kindle book.

Amazon also deserves credit for supporting multi-user accounts and kids’ accounts. That means you can share the Fire HD around to your family without sharing your emails and other personal content. It also means very strong parental controls and a big library of kids’ content.

I have praised Amazon for the family-friendly nature of its tablets before, primarily because Apple has steadfastly refused to put real multi-user features into the iPad. But when it comes to being a parent, well, I am not one. My colleague Dan Seifert is and his family uses Fire tablets, so I’ll turn it over to him to describe the experience:

The best parts of the FreeTime Unlimited service, a year of which is included with the price of the Kids Editions of the tablets, but will cost at least $2.99 per month for the standard tablet, are the ability to gate content to specific age groups, and turn off features like the camera, browser, or purchasing power. I can rest assured that whatever my five-year-old does on the Fire tablet will be age appropriate, and since I can disable the browser and there’s no YouTube app, I don’t have to worry about where on the internet my eight-year-old is going. And neither of them can rack up in-app purchases to my Amazon account.

Amazon likes to tout the time-limit features baked into the FreeTime service, which allow parents to specify how long the tablet can be used per day, right down to what category (games, books, videos) can be used. But I’ve found they aren’t great in practice and we generally have to step in and limit how much the tablets are being used ourselves. Crucially, however, none of these features are available on the iPad, which has much superior hardware, but would require a lot more parental oversight while it’s being used.

Here’s another comparison to your phone: it will almost surely have better specs, better performance, and a better screen than what you get on the Fire HD 8 Plus — even if your phone is a few years old.

To keep the price down, Amazon has tamped the specs down. Your storage options are either 32GB or 64GB, but you can also add more storage via microSD. The processor is a quad-core Mediatek affair that’s faster than previous generations, but still will get lapped thrice-over by most Qualcomm chips.

The screen is 1280 x 800, which means it’s not especially sharp. It’s also not especially bright nor does it have great viewing angles. What it is, though, is eight inches diagonally. That makes it easier to read books or watch movies on than your phone.

The “Plus” in Fire HD 8 Plus means it has 3GB of RAM instead of two and it also includes wireless charging. The latter may seem like a frivolity, but I love it. When you set the tablet into the dock, the Fire HD switches to “Show mode,” which essentially turns it into an Echo Show-style Alexa device. Its speakers won’t be as good as a proper Echo Show, but they’re passable for a tablet.

One spec where the Fire HD 8 Plus will outshine your phone is battery life. Normally we scoff at video rundown tests for tablets since they don’t represent real-world use, but watching video really ought to be your primary activity on this device. Amazon claims 12 hours but I got closer to 10 hours streaming Amazon Prime video. Pretty good.

The Fire HD 8 line also uses USB-C to charge instead of microUSB. That’s more than just a modernization to appease the nerds, it’s a genuine convenience. On the included 9W charger I added 20 percent in half an hour, and on a faster charger I got 30 percent in the same amount of time.

The Fire HD 8 Plus is an inexpensive knock-around-the-house tablet that costs $110, has easy access to lots of video, works as an Alexa smart speaker, and lets you set up custom profiles for everybody in the family. What’s not to love?

Well, using it. Using it for anything more than just navigating your way to a video app or a Kindle book. Even browsing the web can feel like a chore on the Fire HD. If you can afford it, even the lowest-end iPad will get you a bigger and nicer screen, a massive library of great apps, and performance that runs circles around the Fire HD.

But if you only want to spend a hundred-ish bucks or if you want something you can more comfortably hand to your kids, the Fire HD makes a lot of sense — if you’re a Prime subscriber. If you’re not, don’t bother.

The Fire HD 8 Plus is kind of terrible to use if you try to use it as a full-on tablet. But if you just treat it as an appliance for launching Amazon’s big library of content, it’s actually kind of great.