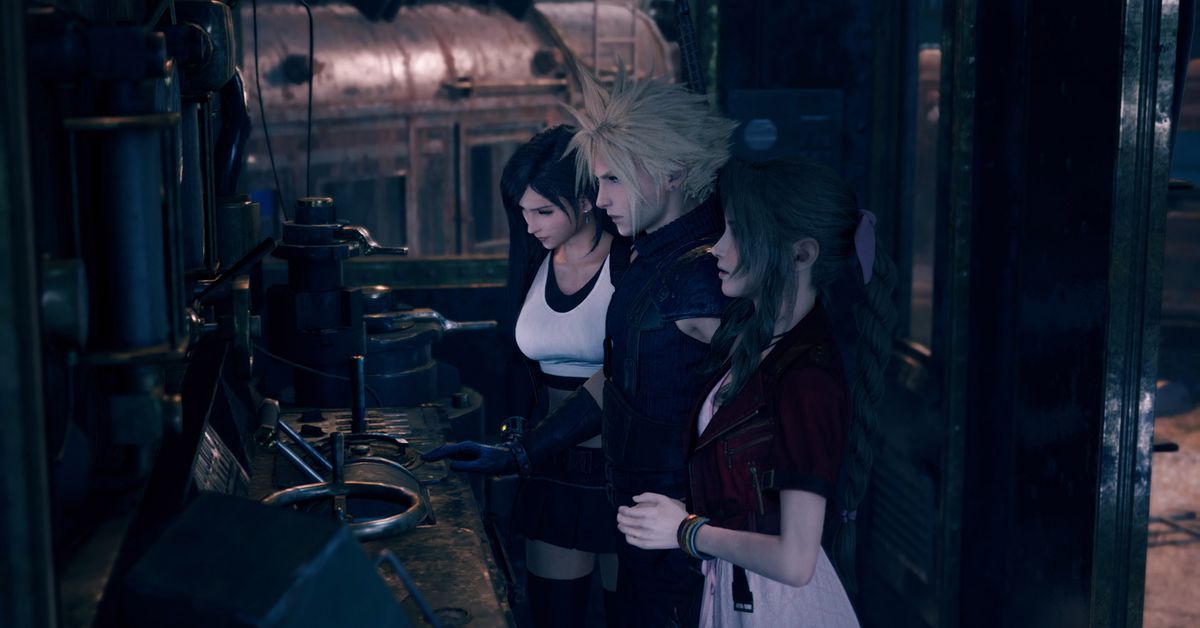 In the original Final Fantasy VII, Midgar can often feel more like an idea than a place. It’s billed as a metropolis torn by ecopolitics and economic disparity, yet players have little chance to see these dynamics at play outside of a few small sectors with tiny populations. Much of its world is reduced to beautiful backgrounds. They ultimately set a scene, opposed to offer an explorable world. Square Enix’s Final Fantasy VII Remake, however, opens up the game’s most iconic setting in a way that feels luxurious in comparison.

Unlike the original, Final Fantasy VII Remake is being split into a yet-to-be-determined number of separate games. For the first, Square Enix chose to highlight Midgar exclusively, otherwise known as home to insurgent group Avalanche and evil corporation Shinra. Shinra, its private military, and the megacorp’s role in the planet’s slow destruction are key to the story of Final Fantasy VII; focusing exclusively on its home base makes sense. After playing a recent demo in New York, the answer to how the developer would turn a few hours of gameplay into a full game feels within reach.

The demo shown to press included the game’s introduction sequence, in which Cloud — a broody mercenary who joins up with Avalanche for a payday — breaks into a reactor to blow it up. From there, it jumps forward to another mission, this time roping in characters like Cloud’s childhood friend Tifa, before once again skipping into a sewer boss battle that adds mysterious magic-caster Aerith.

Where reactors previously felt like a series of small, linear rooms to pass through, in the remake they become major undertakings. Each reactor I played through felt dim, massive, and sterile in a very evil corporation way. On the way to the game’s Air Buster boss fight, part of the group’s task turns to disabling the machine as much as possible ahead of time. That meant weighing possible advantages and deciding which areas were more cost-efficient to trash, from AI cores that allow the Air Buster to move quickly, to the artillery that gave its firepower more punch.

Threaded in between fights, Avalanche’s members chat among themselves in the background. Barret delivers speeches about the group’s mission that teeter between rousing and fanatical. Jessie eagerly discusses Cloud’s looks. It felt at times strangely cheerful for a group of eco-terrorists, but the remake doesn’t seem to be shying away from examining cause and consequence.

Square Enix leans hard into Shinra as a sort of evil oil empire, but with a planet energy known as Mako. It’s ruthless in twisting public narratives to its advantage and keeping the populace dependent on its energy supply by any means necessary.

Yet Avalanche’s presence, too, has consequences for the people of the city. After the first reactor bombing, as the team victoriously heads back to base, civilians sit dazed in the street. They’re frightened and in shock, a bunch of innocents caught in the chaos of a fight in which they have no power. As Cloud dodges enemies and runs past familiar spots, like a giant billboard advertising the play Loveless, people wonder what will happen next or if they’re safe. He’s too busy scanning for access to the rooftops to stop and notice.

Square Enix has yet to show some of Midgar’s most iconic moments, like the trip through Wall Market or the first arrival of mob-like group the Turks. How it will amend or build on a plot established more than 20 years ago is still unclear. In these early glimpses, Square Enix looks to be far more interested in engaging with ideas it once skated past, and what they might mean for the people caught in between.