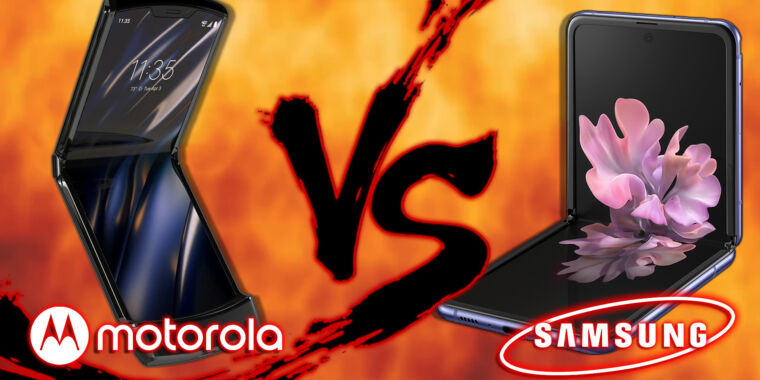 This month marks the start of a heavyweight fight between Motorola and Samsung for the crown of “best foldable-display flip phone.” Samsung and Motorola are both releasing normal-sized smartphones that fold in half, thanks to emerging flexible-display technology. The phones are releasing days apart, at similar price points, with different carriers backing each device.

So welcome to February’s foldable flip-phone fight! In this corner, weighing in at $1,499, we have the nostalgia-infused Moto Razr, which launched February 6 as a Verizon exclusive. And in this corner, we have the first glass-covered foldable smartphone, the Samsung Galaxy Flip Z, which is launching a week later, February 14, as an AT&T and Sprint device for $1,380. FIGHT!

Both of these devices represent a second take on the foldable smartphone after the launch of the Galaxy Fold. Motorola takes the approach of doing away with a crease in the display, thanks to a collapsable hinge mechanism that folds the display into a gentle loop rather than a hard crease. Samsung, meanwhile, is the first to market with the holy grail for foldable smartphones: flexible glass. The Galaxy Z Flip’s glass display cover can be folded in half just like the plastic display covers on other phones, but it provides more protection from scratches and punctures, along with feeling a lot smoother and harder than bubbly plastic.

While we’re currently in the honeymoon period for the Galaxy Z Flip—it’s only hitting the market this week—this comparison isn’t looking good for the Moto Razr. First, despite selling the less expensive phone, Samsung absolutely crushes Motorola when it comes to the spec sheet. The Razr is only a mid-range phone, while the Z Flip spec sheet reads like a 2019 flagship.

The Z Flip has a higher-end SoC, more RAM, more storage, a bigger main display, a bigger battery, a newer OS, and a lower price tag. Motorola tried to bring a new form factor to market, but Samsung is really showing the strengths of its industry-leading supply chain here, turning in a higher-end device for a lower price with more advanced technology like flexible glass.

The Razr only wins in a few areas, but they could turn out to be a big deal for the foldable form factor. First, there’s a bigger front display, which lets you see more text from notifications. As we found out with the Galaxy Fold, opening these foldable phones is more of a barrier than you might expect, at least when compared to the effortless act of checking a normal slab smartphone. When your phone beeps and you just want to see why, it’s nice to be able to glance at the front display and see what’s up, without having to go through the mechanics of opening the hinge. Both phones show notification text on the cover display, but the Razr display is big enough to actually triage some of these incoming notifications like replying to text messages or archiving emails. The Z flip cover display is so small, you can only see a line of text.

The other critical foldable-specific stat, as much as I don’t want to admit it, is thickness. While anorexic phones with minimal batteries are the worst, and I’ve always wanted thicker devices with more battery life, you are going to be folding these things in half to pocket them. That means doubling (and sometimes more-than-doubling) the thickness, and that can be a bit too much.

At 17.1mm thick when folded, the original Galaxy Fold was a pocket buster and thicker than I would like to carry around in a pocket. The Z Flip is slightly thicker than that, so it’s going to be a chunky brick in your pocket. The Razr is a bit thinner at 14mm, but you’re paying dearly for that with a terrible 2510mAh battery. This phone is not going to last all day. The battery technology for a thin, long-lasting smart flip phone is just not here yet.

Is a flip phone even a good idea?

I think there’s still a serious question as to whether these flip-phone designs are a good idea. First, there’s the issue of durability. All of these phones introduce the problem of giant moving parts, which is a significant complication over the solid-state slab smartphone. Manufacturers have to strike the right balance between hinge stiffness and durability, while also allowing for effortless opening and closing, and that can be tough. There’s also the issue of getting debris inside the phone, which can not only mess with the hinge mechanism, it can also damage the display from the underside.

The Galaxy Fold was a delicate flower that was so easy to break that the first launch was cancelled. Even after the six months delay for reworking, things were not much better in the durability department for the Galaxy Fold. No one knows how the Galaxy Z Flip will hold up in the real world, since it isn’t out yet, but Samsung has already started to iterate on the problems present in the Galaxy Fold. Fibrous brushes inside the Z Flip hinge will try to keep debris out of the phone, hopefully protecting the interior of the device. The glass display will also help protect the phone against the outside world, hopefully surviving fingernails, sharp objects, and reinforcing the sides of the display, which are all areas where the plastic display of the Galaxy Fold struggled. The hard, flat glass should also be a lot nicer to swipe around on than the bumpy plastic.

The Razr is already looking like it’s going to be another delicate foldable. Out of the box, the hinge squeaks and creaks, which doesn’t inspire confidence. A store-display demo is one of the harshest environments available for a phone, but it’s already proving too much for the Razr. Numerous reports have come in of dead display units with bad hinges and broken displays. CNET put the phone through an admittedly rough phone-folding robot, but the phone only lasted 27,000 folds, when the Galaxy Fold survived the same machine for over 100,000 actuations.

Another big-point question, especially at this early stage of the foldable form factor: is this design something you’re willing to pay extra for? A device that opens up into a tablet-sized device, like the Galaxy Fold or Huawei Mate X, offers the promise of a real benefit. Tablet-style foldables offer a bigger display in a form factor that would otherwise be unpocketable, theoretically allowing for bigger videos, bigger apps, and better multitasking than your normal smartphone. That’s something I could justify paying extra for.

Vs. a normal smartphone

Flip phones also aren’t necessarily upgrades. The need to always open the phone, every time you want to use it, is a negative. While I haven’t spent a lot of time with a good flip phone yet, I’m not sure I want to add that routine to my daily smartphone usage. Isn’t it easier to just turn on a slab phone and have the screen there, ready to use it, without having to flip it open every time?

Other than the potential pocketability, you’re primarily buying a folding flip phone because they’re just cool. If the flip and slab version of a phone were the same price, I could see picking the flip phone for the novelty, but are you willing to pay hundreds more for the privilege? The $1,499 Moto Razr is basically a $400-$500 mid-range smartphone with a tricked-out display and hinge mechanism. I think most people would agree that the $479 Pixel 3a XL is a better phone than the Razr, especially once it’s open. In Samsung land, the $1,380 Z Flip is not that different from the Galaxy Note 10+, which released at $1,100 but is now regularly for sale at $950. If you’re out for high-end value, then the king of bang-for-your-buck is OnePlus, which sells the OnePlus 7T for just $600. By my math, you’re looking at anywhere from $400-$1,000 for that flip action, which is a tough sell, especially for unproven designs.