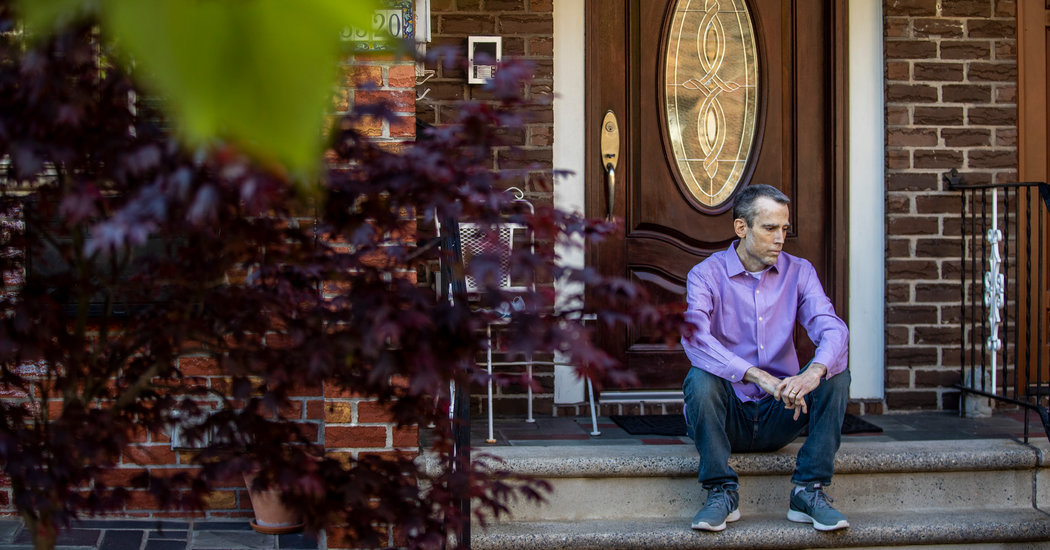 It was the call Lance Hansen, gravely ill with liver disease, had been waiting weeks for, and it came just before midnight in late April. A liver was available for him. He got up to get dressed for the three-hour drive to San Francisco for the transplant surgery.

And then he panicked.

“Within five minutes after hanging up, he started hyperventilating,” his wife, Carmen, said. “He kept saying: ‘I’m going to get Covid, and then I’m going to die. And if I die, I want my family there.’ I couldn’t believe what I was hearing.”

She promised she would wait outside the hospital, as patients’ families were barred from entering. She warned that he might not get another chance at a new liver before it was too late. She told him he could die if he didn’t go. Still, Mr. Hansen, 59, refused.

In a world seeded with anxiety, fear is gripping not just people who are ill with the coronavirus but those in urgent need of other medical care. Even as the number of Covid cases declines in many places, patients with cancer, heart disease and strokes, among others, are delaying or forgoing critical procedures that could keep them alive. And as the virus reignites in pockets of the country, people are ignoring symptoms altogether, afraid to set foot in emergency rooms or even doctors’ offices.

Under orders from their states, many hospitals canceled elective surgeries like hip replacements as Covid cases soared. Now most are gradually allowing the resumption of elective surgeries. But for these, as well as for more time-sensitive procedures like cardiac catheterizations, cancer surgery and blood tests or CT scans to monitor serious chronic conditions, doctors now find themselves spending hours on the phone trying to coax terrified patients to come in.

In a review of its claim and pre-authorization data for seven acute conditions, including heart attacks, appendicitis and aortic aneurysms, the insurance company Cigna Corporation found declines ranging from 11 percent for acute coronary syndromes to 35 percent for atrial fibrillation in the rate of hospitalizations over a recent two-month period. In a study published Tuesday in The New England Journal of Medicine, Kaiser Permanente reported a drop of nearly 50 percent in heart attack admissions in its Northern California hospitals.

At the University of Rochester Medical Center in Rochester, N.Y., emergency room visits dropped by 50 percent, and many of the patients who do come have waited too long to seek treatment. They “are presenting late with strokes and heart attacks,” said Dr. Michael Apostolakos, the system’s chief medical officer. “Or they’re not showing up until they can barely breathe from heart failure.”

In Newark, emergency medical services teams made 239 on-scene death pronouncements in April, a fourfold increase from April 2019. Fewer than half of those additional deaths could be attributed directly to Covid-19, said Dr. Shereef Elnahal, president and chief executive of Newark’s University Hospital.

Declining crucial, potentially lifesaving treatment might seem irrational. Mental health experts explain that anxiety affects the part of the brain involved in thinking and planning for the future. It arises when that part, the prefrontal cortex, doesn’t have enough information to accurately predict what lies ahead, causing the brain to spin scenarios of dread.

“If you have anxiety and then you exacerbate that by watching the news and reading social media, that’s where you get panicked,” said Dr. Jud Brewer, a psychiatrist and behavioral neuroscientist at Brown University. “And the rational, thinking parts of the brain stop functioning well when we’re panicked.”

Panic, in turn, can lead to impulsive behavior and dangerous decisions, Dr. Brewer and others said.

“People are saying: ‘So I’m having a heart attack. I’m going to stay home. I’m not going to die in that hospital,’” said Dr. Marlene Millen, a primary care physician at the University of California, San Diego. “I’ve actually heard that a few times.”

Dr. Suzanne George, an oncologist at the Dana-Farber Cancer Institute in Boston, has patients on oral chemotherapy regimens who refuse to come in for lab work. Cancer patients on chemotherapy are at particularly high risk of becoming severely ill if they contract the coronavirus.

“They don’t want to leave their house so we can take tests to ensure that they’re receiving their chemotherapy safely,” Dr. George said, adding that blood tests are crucial for early detection of potentially severe side effects.

Dr. George said the fear she was seeing a few weeks ago had abated slightly. Still, she said, “we will all need to come together to help people feel safe.”

Most hospitals and outpatient clinics have made changes designed to keep patients and staff members safe. Many are testing patients and certain workers. In many hospitals, Covid patients are kept in separate units. Masks are usually mandated for both patients and clinicians. Cleaning protocols have been turbocharged. As a result, experts say, the risk of acquiring Covid when going into a hospital is very low.

But one of the common safety measures — banning visitors, even close family members — is a huge reason for patients’ fear and apprehension.

“The hospital was an ominous, nerve-racking and scary place for patients even before Covid,” said Dr. Lisa VanWagner, a transplant hepatologist at Northwestern Medicine in Chicago. “Now you take a stressful situation like a pandemic and you tell people that they cannot have their normal support system while they’re in the hospital, and that really magnifies those fears.”

Transplant specialists around the country describe patients like Mr. Hansen, 59, who turn down organs because they are worried about being exposed to Covid patients or because they cannot have a close relative or friend with them in the hospital.

David Rivera, 54, who has liver cancer, declined a liver in late March at Northwestern. In an interview, he said he feared the deceased donor could be infected with the virus.

Dr. VanWagner, who is on the transplant team at Northwestern, said Mr. Rivera had turned down the liver despite being told the donor had tested negative for Covid-19. Still, the hospital could not guarantee that the liver was free of the coronavirus, though Dr. VanWagner and others said the chances that a liver donor who had tested negative would transmit the virus to a recipient were exceedingly low.

Dr. VanWagner said Mr. Rivera needed a transplant before his cancer could progress. “His window is closing,” she said. “You can only go so long before you run out of chances.”

Mr. Hansen said he now regretted the decision he made last month and would accept the next liver that became available.

Health system administrators are redoubling their efforts to convince patients that it’s safe to come into hospitals and outpatient clinics, even as testing for hospital personnel and patients remains spotty.

“Our goal is to spend almost all our marketing dollars over the next year around the safety of our institution,” said Dr. Stephen Klasko, chief executive of Jefferson Health, a 14-hospital system based in Philadelphia.

Some doctors are helping patients with chronic illnesses rethink aspects of their care.

For the past 21 years, Rob Russo, 45, has been living with a rare type of gastrointestinal cancer that has spread to his liver. For years, he made regular trips from his home in Queens to Dana-Farber in Boston. When the pandemic hit, Mr. Russo’s oncologist helped him transfer much of his care to Memorial Sloan Kettering Cancer Center and NewYork-Presbyterian/Weill Cornell Medical Center in New York.

At the end of April, Mr. Russo needed a procedure at Weill Cornell to unclog a stent that was keeping his biliary duct open. Before the procedure, Mr. Russo’s mind churned with scenarios: The place was teeming with the virus. What if someone with asymptomatic Covid-19 infected him, and he needed to be hospitalized? And what if that meant never seeing his wife again?

“She could drop me off, and it’s the last time we’d see each other,” he said.

Like others interviewed for this story, Mr. Russo found that once he had arrived at the hospital, he felt safe. Multiple safety precautions were taken. The procedure went well. But before the procedure, he was tested for Covid. The test came back positive. Now he’s quarantined on a separate floor in his house.

Mary Anne Oldford, 72, who has an advanced form of sarcoma, a rare cancer, runs an online support group called the Sarcoma Sunflower Brigade. Members make a point of not bringing up Covid, but when Ms. Oldford asked them recently to weigh in on their anxiety related to the coronavirus, she got responses that illustrated various shades of sheer terror. One woman told the group that every time she has to go in for a scan, or blood work, “I have a borderline meltdown.”

Ms. Oldford, who herself has been terrified to go for blood tests, came up with a solution for herself. She found a clinic that agreed to do her blood draws at home.

She advises others in the support group to push for effective alternatives. “If you’re afraid and you’re frozen, you have to somehow reach out and just say, ‘Please help me figure out how to do this so that I’m not so scared,’” she said.

Bill Sieber, a psychologist at U.C.S.D., said the key for fearful patients was to develop a semblance of control over their predicament. “Control is key,” Dr. Sieber said. “If you can’t control the fact that your spouse can’t come into the recovery room, ask what you can control.”

Dr. Sieber also recommended working through episodes of panic with breathing. “We can control our breathing in a major way,” he said. “Breathing signals the brain to calm down.” One step he suggested was taking one extra second to prolong an exhalation.

Controlled breathing helped Megan Jennings. Ms. Jennings, 36, who lives near Seattle, was determined to save the life of her 7-year-old niece, who has a congenital liver disease, by donating a portion of her own liver.

It was a fraught decision not just for Ms. Jennings but also for the University of Washington transplant team.

“This child was getting sicker, and we had to make a decision whether we would move forward with bringing a live donor into our hospital, which had a lot of Covid at what turned out to be the peak of our surge,” said Dr. Scott Biggins, chief of hepatology at UW Medicine.

Ms. Jennings used a variety of breathing techniques to overcome a standing fear of hospitals and surgery, now compounded by a dread of the coronavirus.

“Being able to slow my breathing, feeling my body, and ground myself, staying mindful of what was happening around me, helped me stop my brain from rattling off craziness,” Ms. Jennings said. The surgery lasted seven hours.

After a five-day hospital stay, with no visitors, she was finally discharged. But a few days after she returned home, her wound became infected, and she had no choice but to return to the hospital to have the incision reopened and cleaned. The doctors in the emergency room recommended that she spend the night in the hospital, but there was a limit to how much anxiety she could tolerate. She insisted that she be shown how to care for the wound at home.

Sleep-deprived and foggy from a painkiller, she slept for two hours in her car. Then she drove herself home.