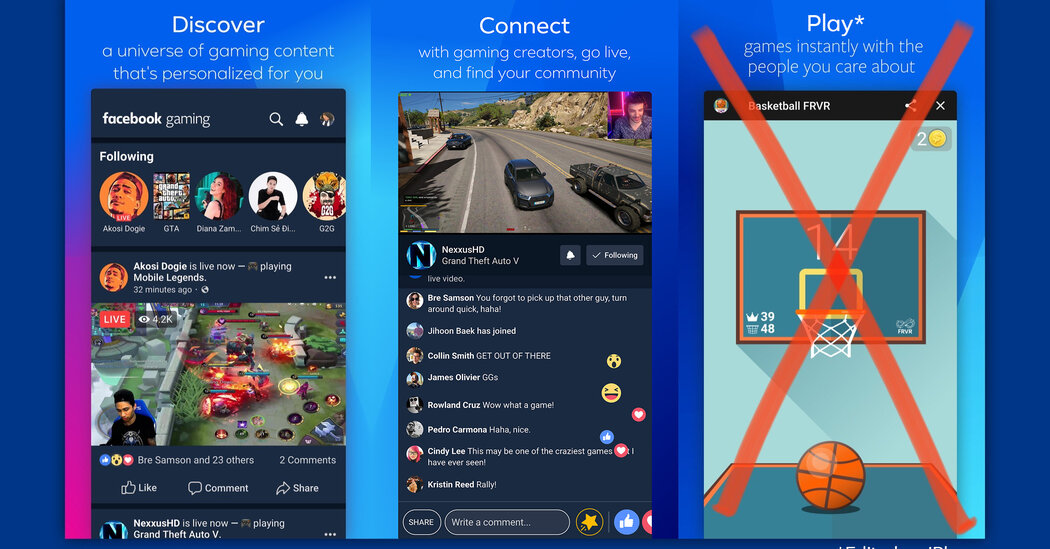 For six months, Facebook tried to get Apple to approve its new Facebook Gaming app so it could be available in Apple’s App Store. Each time, Apple said no.

This week, Facebook said it had acceded to Apple’s demands to change its Gaming app so that it could be distributed to iPhone and iPad users starting on Friday. To comply with Apple’s rules, which prohibit apps if their “main purpose” is distributing software such as games, the social network said it had entirely removed playable games from its new app.

Facebook said Apple had essentially used its power over the App Store to force its hand, turning the Gaming app into an inferior experience for iPhone and iPad owners. In addition to playable games, the original version of the app allows users to watch and create live gameplay streams and participate in gaming communities — functions that will still operate in the Apple version.

The frustration with Apple extends to Facebook’s highest echelons. In a statement, Sheryl Sandberg, the company’s chief operating officer, said, “Unfortunately, we had to remove gameplay functionality entirely in order to get Apple’s approval on the stand-alone Facebook Gaming app.” She added that Facebook would continue to build communities for those who played games on Facebook, “whether Apple allows it in a stand-alone app or not.”

Games are the largest source of revenue for Apple on the App Store, and many tech executives have concluded that Apple blocks game services that could compete with its own products and sales.

Apple, without directly addressing Facebook Gaming, said its App Store policies were designed to protect consumers. It added that it had allowed other apps that included games into the App Store.

The sparring is a reminder of where the power lies in Silicon Valley. While Facebook runs the world’s largest social network and owns many popular apps such as Instagram, Messenger and WhatsApp, Apple controls their distribution through its App Store. That makes Facebook dependent on Apple to reach many of its users.

Mark Zuckerberg, Facebook’s chief executive, has expressed consternation about the power that Apple holds, albeit obliquely. In testimony to Congress last week about Facebook’s rivals, he said, “Some are upstarts, but others are gatekeepers with the power to decide if we can even release our apps in their app stores to compete with them.”

In June, the European Commission, the executive body of the European Union, said it had opened a formal antitrust investigation into Apple’s App Store terms, spurred by a complaint from Spotify, the music-streaming service. Other app developers, such as Basecamp, have also scuffled with Apple over its App Store rules.

Some companies with gaming apps are shying away from Apple’s App Store, privately saying Apple will simply not approve their apps because they compete. On Wednesday, for example, Microsoft ended a limited test of its xCloud game streaming app for Apple devices, though it will offer cloud gaming on Android devices starting next month.

“Unfortunately, we do not have a path to bring our vision of cloud gaming with Xbox Game Pass Ultimate to gamers on iOS via the Apple App Store,” a Microsoft spokesman said on Thursday. “Apple stands alone as the only general-purpose platform to deny consumers from cloud gaming and game subscription services like Xbox Game Pass. And it consistently treats gaming apps differently, applying more lenient rules to nongaming apps even when they include interactive content.”

Facebook announced its Gaming app in April, saying people could use it to watch livestreams of games and play simple games like Words With Friends and Thug Life. Google’s Play store for Android devices approved it that month.

But Apple rejected at least five versions of Facebook Gaming this year. In its denials, Apple cited rules that forbid apps with the “main purpose” of distributing games and apps that offer simple games in a “store or storelike interface.”

Facebook kept trying. It said it had told Apple that more than 95 percent of activity on the Android version was watching streams of game playing, rather than playing games directly.

To please Apple, Facebook made games less prominent by first removing icons from a list of playable games and then removing the game catalog entirely. In the last rejected version, which Facebook submitted in May, the only way for users to find playable games was scattered in their news and activity feed.

In June, Apple announced a new appeals process for App Store submissions, including the ability to challenge its guidelines. A Facebook spokesman said the social network had requested such an appeal for Facebook Gaming but never received a response.

“Apple ghosted us,” he said. Apple approved Facebook Gaming only after Facebook submitted a version with games completely removed, the spokesman said.

On Friday, when Facebook releases the app for iPhone and iPad users, it also intends to distribute a cheeky image of the “Play” aspect of the app crossed out in red, with an asterisk reading, “Edited on iPhone.”

Apple’s moves have created “shared pain across the games industry, which ultimately hurts players and developers and severely hamstrings innovation on mobile for other types of formats like cloud gaming,” said Vivek Sharma, Facebook’s vice president for gaming.