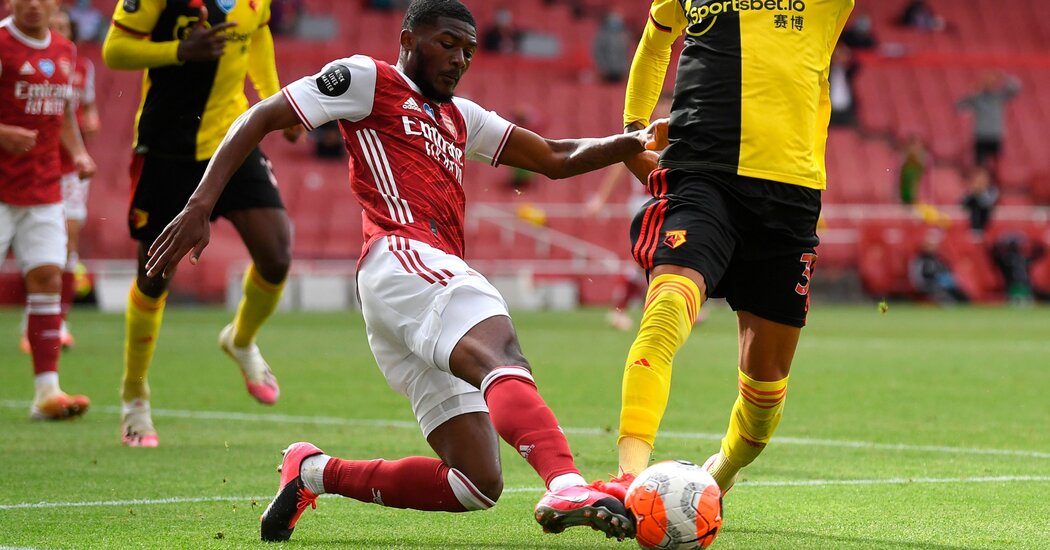 LONDON — The English Premier League, already facing mounting losses because of the continued impact of the coronavirus crisis on soccer and other sporting events, announced on Thursday that it had canceled its most lucrative overseas broadcast contract after it was unable to resolve a dispute with its Chinese partner.

The league and its Chinese broadcast partner, Suning Holdings, a closely held company controlled by one of China’s richest men, had been locked in talks for months after Suning failed to pay the league $200 million in fees due in March, in the first year of a record three-year agreement worth more than $700 million.

The termination of the contract with Suning Holdings adds to the woes of the Premier League, the most-watched sports league in the world. The league was already required to repay millions to television companies in Britain and overseas because of the disruption caused by the coronavirus to the 2019-20 season championship. Further financial damage has been caused by the league being forced to play without spectators, cutting off a lucrative revenue stream that is unlikely to return to precoronavirus levels until at least next year.

“The Premier League confirms that it has today terminated its agreements for Premier League coverage in China with its licensee in that territory,” the league said in a short statement confirming its decision.

PPTV, the Suning Holdings subsidiary that broadcast the matches, said in a statement that “after rounds of meetings, PPLive Sports and the Premier League” had been unable to reach an agreement on the cost of broadcasting rights.

“Covid-19 has brought many challenges, and it is especially notable during broadcasting rights negotiations,” the statement said.

Even though Suning cast the decision as purely business, it comes at a time when China’s relationship with the United Kingdom has deteriorated. Britain angered China in July when it banned the Chinese technology giant Huawei from the country’s high-speed mobile network, reversing an earlier decision.

That came a month after Britain stoked Beijing’s ire when Prime Minister Boris Johnson promised to allow nearly three million people from Hong Kong to live and work in Britain if China passed a new national security law in the former British colony.

The Premier League, with its matches broadcast in more than 200 territories around the world, has grown to become Britain’s best-known export since it began in 1992. Its longtime former chief executive, Richard Scudamore, was regularly invited to join government trade missions to strategically important markets.

China had long been a particular focus for the league’s growth, with the Premier League’s Asia Trophy — a branding exercise as much as an off-season tuneup event — frequently being held in Hong Kong and mainland China.

The termination of the broadcast contract comes just months after a politically charged episode involving Premier League broadcasts in China.

In December, matches involving one London-based Premier League team, Arsenal, were summarily taken off the air after a post on Twitter by its German star Mesut Özil that denounced China’s treatment of the Uighurs, a largely Muslim minority in northwestern China. While Arsenal matches eventually returned to screens, Özil was essentially erased from coverage in China, with commentators not mentioning his name and internet searches for him ending in error messages.

The N.B.A.’s Houston Rockets found themselves in a similar imbroglio last October, when the club’s general manager expressed support for protests in Hong Kong, setting off a wave of anger in China.

The Premier League struck its deal with Suning, which owns the Italian soccer giant Inter Milan, at the peak of a spending spree on soccer assets by Chinese companies. Dozens of teams across Europe were acquired and millions were being lavished on broadcast rights, capped by the agreement with the Premier League — a deal worth 12 times more than the league’s existing Chinese contract.

The Premier League has become by far the world’s most lucrative domestic competition, thanks in large part to overseas broadcasters, which accounted for almost half of the league’s $11.7 billion in rights agreements for its current 2019-2022 cycle.

That influx of cash has fueled spending on some of the world’s most talented players on salaries that only a handful of teams in other leagues can match.

But in the player transfer window before a new season starts this month, the continued uncertainty from the coronavirus pandemic has led all but a few teams — like the billionaire-backed Manchester City and Chelsea — to show restraint in changing their rosters. The loss of millions from the terminated Suning contract might also put a damper on major deals this year.