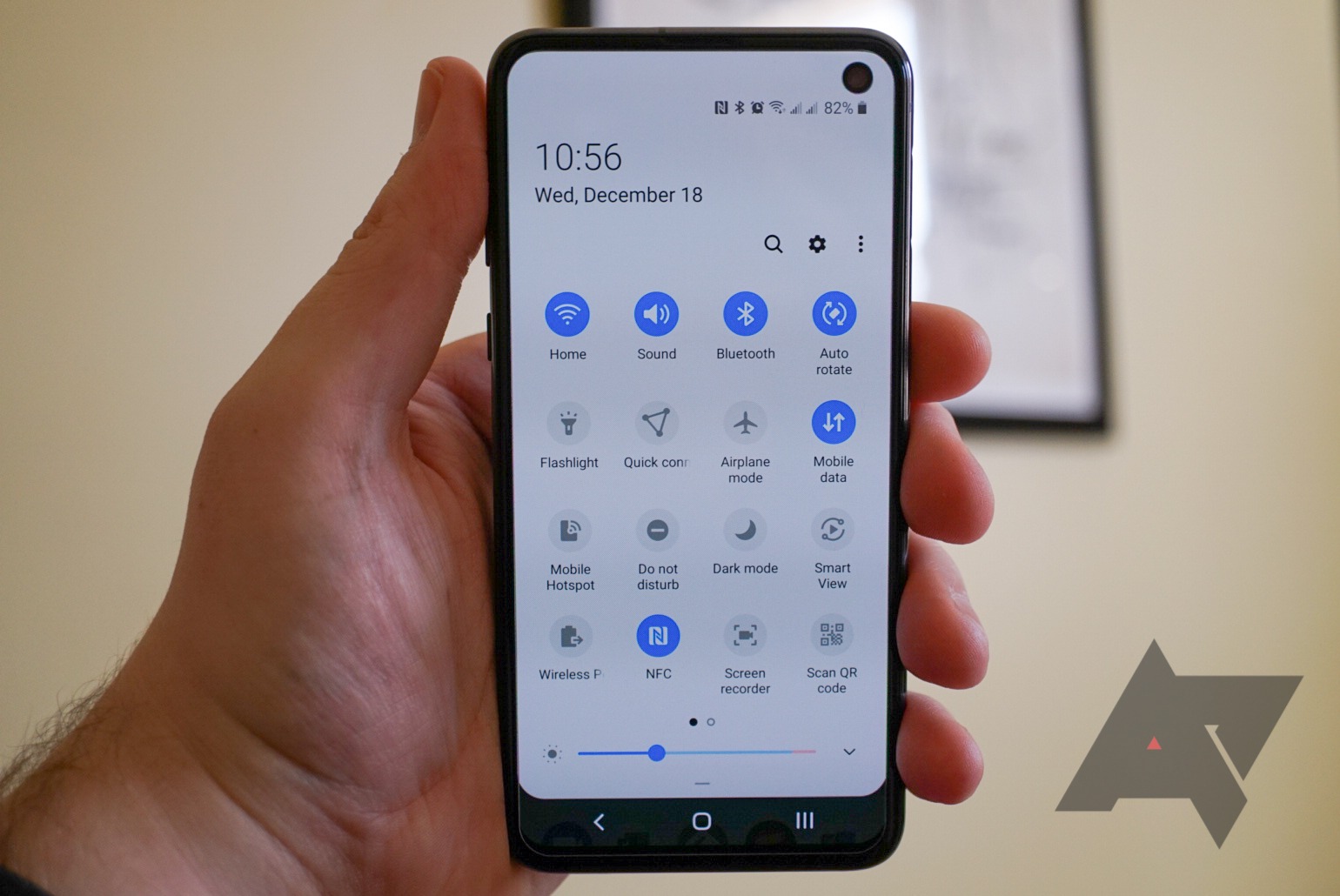 While some of the features are relatively easy to locate (like gestures), there are some less obvious ones you might not have even known were included, because they’re a bit hidden away in Samsung’s notoriously labyrinthine menus. We’ll run down eight of our favorites in this post, from a new screen recorder to redesigned incoming call interface options.

Google was developing a screen recorder for Android 10 at one point, but the feature never made it into the final release. Thankfully, Samsung implemented it in One UI 2.0, and it’s as full-featured as it could possibly be.

I generally like Samsung’s design language, but the company does have a problem with information density. The Quick Settings panel is a good example of this — I didn’t really need always-visible toggles for my SIM cards and SmartThings devices, but they were there anyway. In One UI 2.0, Samsung has added a new ‘Quick panel layout’ that lets you turn off the media/devices panel and multi-SIM information.

Samsung has also adjusted the overall layout of the Quick Settings. The clock at the top has been reduced in size, leaving room for another row of quick settings tiles (if you don’t have the media panel and other options enabled).

OneUI 1.0 already had a system-level dark mode, but it was mostly limited to Samsung’s own applications and a handful of third-party apps that added the required detection code (like Chrome, the Play Store, and a few others). Android 10 introduces the new standard system dark mode, which Samsung has integrated into One UI 2.0.

As a result, the system dark mode setting now works with far more apps, including Gmail, Google Tasks, Pocket Casts, Instagram, YouTube, Nova Launcher, and countless others. The best part is that the scheduled dark mode still works like it did in One UI 1.0, so you can have all your apps turn dark after sunset automatically — something you can’t do on Pixels. The wallpaper will also dim when dark mode is enabled.

While this isn’t exactly One UI-specific, the new navigation gesture functionality is one of the most talked-about features in Android 10. Samsung lets you pick from the classic three-button navigation bar, the One UI 1.0 gestures (where you swipe up where the buttons would be), and the new Android 10 gestures.

Annoyingly, Samsung hasn’t integrated the post-update patch that allows third-party launchers to work with the Android 10 gestures, so you’re stuck with the One UI launcher if you want to use that feature.

Samsung has been known to add smaller features along with security fixes, so here’s hoping support for third-party launchers shows up soon.

If you take a lot of calls on your phone, you might appreciate this feature. The Phone app in One UI 2.0 has new options for displaying calls — they can either come in as full-screen alerts, pop-ups (like in stock Android), or as tiny floating pop-ups.

If you choose one of the pop-up options, you can also leave the call in the popup, like a chat head in Facebook Messenger. Fun!

You can get to this setting by opening the Phone app, tapping the menu icon, selecting ‘Settings,’ and choosing ‘Call display while using apps.’

In One UI 1.0, you could assign any installed app to one of the shortcuts at the bottom of the lockscreen. In One UI 2.0, this feature now includes toggles for the torch and activating do not disturb. It’s a relatively minor change, but it’s one we appreciate. These shortcuts weren’t utterly useful to some of us, but being able to quickly activate the torch while in the dark, or do not disturb in a meeting is excellent.

This app was already available in One UI 1.0, but it received a significant overhaul as a part of the Good Lock 2020 update. Offering extensive customization to gesture navigation, it fixes everything wrong with Google’s method found in Android 10. For a start, you can have the activation area for side gestures extend only part way up the screen, as indicated by the transparent blue boxes in the screenshots below. This removes the need to use “peeking” when sliding out side menus, because you can just swipe from above the gesture area.

As well as going back with a small swipe from either edge, you can expand things further with options for diagonal and long swipes, giving you a total of six options per side. These options range from pulling down your notification shade to taking a screenshot or opening Google Assistant. The best part is that One Hand Operation works with the traditional navbar, Samsung’s gesture system, and the default Android 10 gestures. One of our favorite gestures is opening something called Quick tools. From this panel, you can adjust several system settings, as well as pull down the notification shade or adjust the brightness.

To be clear, this is still the same system of using the selfie camera that we had before. There are no fancy mapping sensors like the ones found on the Pixel 4, and this is by no means the safest way to secure your phone. Samsung has made some quality of life changes, though, and as we don’t keep nuclear launch codes on our phones, it’s secure enough for us.

The first addition is an alternative look. If you have a favorite hat or pair of sunglasses that you often wear, you can add a separate face scan into the database with those accessories on. Next, Samsung has added an option to require open eyes. Yup, Samsung did this months before Google did on the Pixel 4, and this isn’t even the primary biometric security method.

Zachary Kew-Denniss contributed to this article.