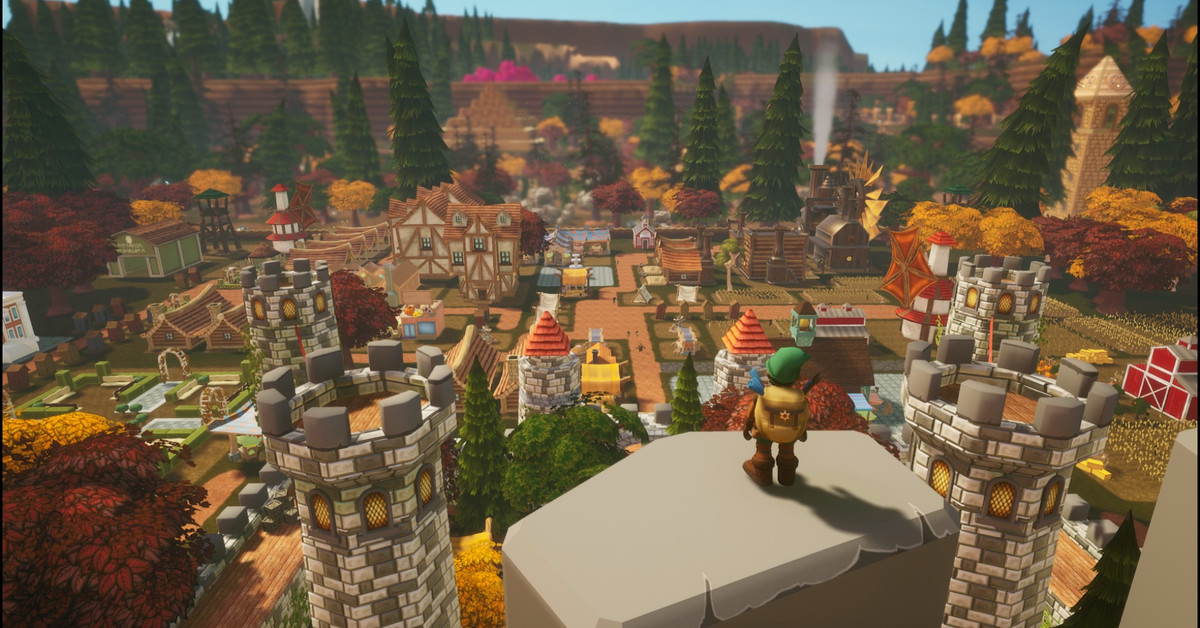 Dwarrows is a sticky game that fits nicely in the gap between a cozy life sim and an old school, N64-era platformer. I head out into the wilderness with a specific tool, ready to crack open a mystery in the wilderness. While out, I fill my pockets with supplies, and come back to upgrade my stuff, which eventually leads to me heading back out again. It’s a winning formula that makes me behave like a fussy cat.

Dwarrows attempts to wrestle the two genres into a tiny, warm box. The result largely works, and playing Dwarrows feels like I’m slipping on a pair of goggles that teleports me back to 1998, playing Banjo-Kazooie or Sonic Adventure 2 on a couch with a friend.

It’s a sedate, relaxing romp of a game, and while the town building and community elements lack the “one more turn” intensity and involvement of a traditional civilization builder, that’s okay. Dwarrows knows full well that it’s not an edge-of-your-seat game.

In Dwarrows, I’m given a rundown castle and town surrounded by a giant fantasy forest. The Wood Elves have been scattered to the lands, and the peaceful elf queen wants them to have a nice new home, which is certainly a noble goal. I’ll have to renovate the structures of this new town, build new facilities as new civilians set up shop, and set out into the forest to find settlers and bring them back to my sweet new town, which starts in shambles and is slowly built up.

I navigate the world via three helpful characters: The Gatherer, The Builder, and The Explorer. The triple protagonist system is a lot like Grand Theft Auto V, but instead of switching between the murderous, unpredictable Trevor to the resigned, rich Michael, I’m switching between three cute little fantasy characters with unique abilities, like finding artifacts, or repairing a run-down tower.

These abilities prove to be quite useful, because I spend the bulk of my time out in the world, exploring and talking to folk. Sometimes, I have to complete a challenge, like racing through a platforming course before the timer runs out. Other times I might encounter a quest chain that sends me to and fro across the world. Otherwise I’m just out there performing the most basic of building tasks: cutting down trees and mining ore.

A sense of adventure

After I make an initial run for supplies and residents, I have to make sure that their lives are actually an upgrade from being refugees lost in the woods. I have to build places for them to sleep and bathe, farms to feed them, and so on. If I succeed, they’ll be happy, and pitch in around the place. If I fail, they’ll bounce back off into the woods.

Dwarrows judges my progress with three aspects: culture, economy, and quality of life. If my economy rating is low, for instance, I can build a market to boost it back up, while a nice garden will increase quality of life. All three of these ratings factor into an overall star rating; my long-term goal is to hit five stars.

So, how do I get the stuff I need to get that coveted five-star ranking? I head out into the forest around the world, which has randomly generated resource spawns — and other secrets or quests to stumble on in the process. If I complete these quests, I can hold more resources, so there’s a symbiotic relationship between the city-building content and the third-person adventuring.

Since there’s no combat, the exploring and adventuring are extremely chill. The world, people I meet, and animals occasionally look a little blocky or cartoonishly rendered. Overall, it feels a lot and looks a little like a N64 classic, except without the burden of age. Playing Dwarrows is a lot like I remember games like Donkey Kong 64 or Space Station Silicon Valley. It’s simply rendered and a little blocky, but that’s fine — it gets the job done and lays out the world well enough. It’s even charming at times, especially when I’m chatting to some of the loquacious characters around my camp.

There’s a very simple video game mechanic that is both very old and immensely satisfying: seeing a wall with a giant crack in it, and then later returning to that wall with a bomb. It’s up there with going behind a seemingly ordinary waterfall to find a secret cave, or using a helpful animal companion to reach a really high ledge.

Dwarrows’ triple-protagonist model, combined with the open world, gives me constant opportunities to capitalize on the exploration feel-good boost. I switch between the protagonists as I need; one tunnel might not be accessible until I bring the builder and her shield. Other times, there might be a valuable treasure around, so I have to call in the explorer to scale a wall and use a diviner until I find the goods.

The gatherer was my explorer of choice, as he’s the guy who can get resources, but all three companions saw play at one time or another. It’s necessary to switch between the three to get the most out of the game, and it’s not a particularly difficult puzzle, but it does feel good to identify a problem and then call in the tools to solve it.

Dwarrows isn’t particularly difficult; it does require some effort and input, but as long as a player is giving a solid effort, they should be able to advance. This is a game that I’d feel comfortable picking up for a niece or nephew, or mentioning to a friend who’s fried after work. It’s a great first civ-builder, or a low key adventuring game that dodges the awkwardness of combat and stilted camera angles. My settlement never had quite the same character as the Stardew Valley Pelican Town, or an Animal Crossing village, but that was also okay; Dwarrows doesn’t try to be everything, and the result is a welcome throwback to a game that was once lost to the late 90s.