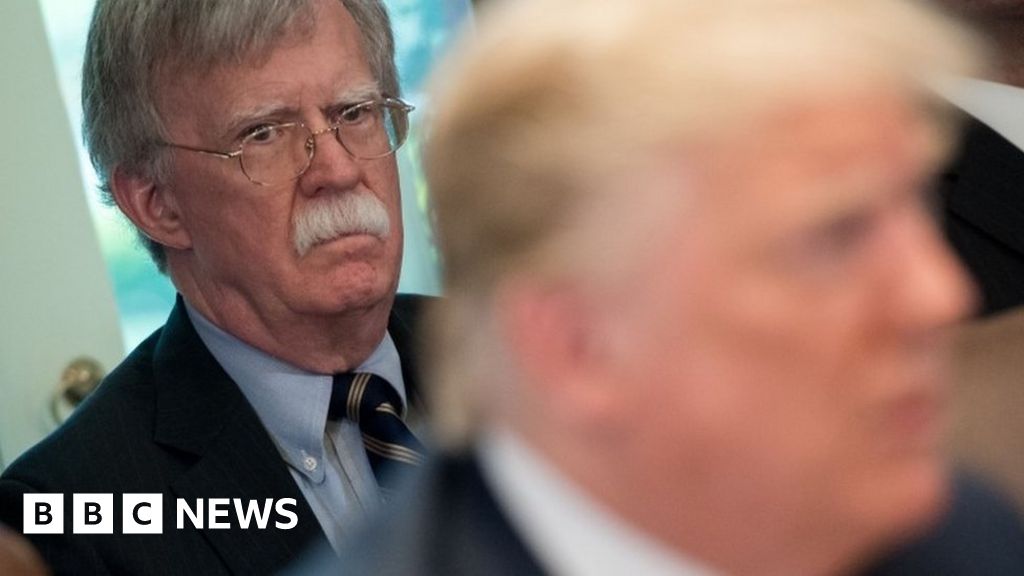 Calls for his testimony come amid claims that the adviser directly linked Mr Trump to a plan to freeze aid to Ukraine in exchange for a political favour.

The claims, reportedly made in a book manuscript, are central to the trial that has resumed on Monday.

But the claims allegedly made by Mr Bolton could damage the president’s defence.

The president is accused of withholding military aid to pressure Ukrainian President Volodymyr Zelensky to start a corruption investigation into Mr Biden, and his son Hunter.

However, some Republicans have now said Mr Bolton should be heard from.

The claims emerged as the impeachment trial resumes on the Senate floor.

What did Trump’s lawyers say on Monday?

Speaking on the second day of Mr Trump’s defence, attorney Kenneth Starr warned senators that impeachment could become “normalised” and used as a weapon against future administrations.

Mr Starr came to prominence in 1998, when he led an investigation into Democratic President Bill Clinton that laid the foundation for his impeachment.

“Like war, impeachment is hell,” Mr Starr said on Monday. “It’s filled with acrimony and divides the country like nothing else. Those of us who lived through the Clinton impeachment understand that in a deep and personal way.”

What do the new reports allege?

On Sunday, the New York Times cited excerpts from an unpublished book by Mr Bolton, who was fired from the White House in early September.

They included claims that Mr Trump told Mr Bolton in August that he wanted to withhold $391m (£300 million) in security aid to Ukraine until officials there assisted with probes into Democrats, including Mr Biden.

If true, such a claim would undermine the main argument of Mr Trump’s defence team that there was no “quid pro quo”, offering aid in return for investigating Mr Biden.

“Bolton directly contradicts the heart of the President’s defence,” tweeted Democratic congressman Adam Schiff, who serves as the senior House prosecutor in the impeachment trial.

“If the trial is to be fair, Senators must insist that Mr Bolton be called as a witness, and provide his notes and other documents.”

Will it change anything?

While John Bolton has said he’s happy to appear before the Senate, whether he can do so starts with a question of simple maths. Are there four Republicans out of the 53 in the Senate interested enough in what he has to say to bring him in to testify?

While he clearly could be a key witness – revealing the motivations behind the hold on US aid to Ukraine and the president’s involvement – calling him as a witness would plunge the Senate trial into the unknown.

Republicans have already said that if Bolton appears, they’ll also subpoena the Bidens, the whistleblower [who triggered the impeachment inquiry] and others. It could start a tit-for-tat that drags on for weeks, ending the prospect of a speedy conclusion to the proceedings.

The truth – at least Mr Bolton’s version of it – will eventually come out. The quandary for the handful of Senate Republicans on the fence about witnesses is whether they want to hear it now or keep the lid on things until after the president’s likely acquittal.

What has been the reaction to the latest revelations?

Interest for Mr Bolton to testify grew following the New York Times report. Republican Senator Mitt Romney said: “I think it’s increasingly likely that other Republicans will join those of us who think we should hear from John Bolton.”

Susan Collins, a centrist Republican from Maine, tweeted: “The reports from John Bolton’s book strengthen the case for witnesses”.

House Speaker Nancy Pelosi said that Republicans’ refusal to call Mr Bolton and others is “now even more indefensible”.

But Mr Trump denied the claim, writing on Twitter: “I NEVER told John Bolton that the aid to Ukraine was tied to investigations into Democrats, including the Bidens.

“In fact, he never complained about this at the time of his very public termination. If John Bolton said this, it was only to sell a book.” Mr Bolton served as National Security Adviser to Mr Trump from April 2018 to September 2019.

Mr Bolton’s lawyers blamed the leak on the White House, which had received a copy to review for any disclosure of classified information.

The latest reports come after a video made public on Saturday showed Mr Trump ordering the removal of the US ambassador to Ukraine in 2018.

He is the third president in US history to face an impeachment trial.

What questions do you have about Donald Trump’s impeachment trial?

In some cases your question will be published, displaying your name, age and location as you provide it, unless you state otherwise. Your contact details will never be published. Please ensure you have read our terms & conditions and privacy policy.

Use this form to ask your question: