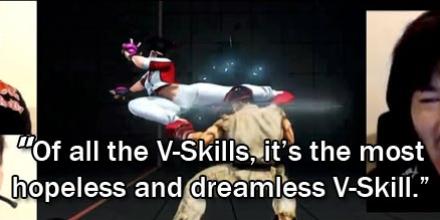 Everyone knows about Ryu’s V-Skill 2, the Thrust Strike, at this point. It’s widely considered to be one of the worst V-Skills in Street Fighter 5: Champion Edition. It was ranked as such on our V-Skill 2 poll some time ago.

On January 28, CYG|Daigo summarized the real issues surrounding Ryu’s lackluster Thrust Strike. Thanks to FGC Translated, we can clearly understand what Daigo’s thoughts are on the subject.

“Everyone in the world knows [that Thurst Strike] is weak,” begun Daigo. “But that’s OK. That’s not the issue.”

“In times of hardship, people can endure pain because they can still dream. As long as there is hope, people can still work hard. What’s bad about V-Skill 2 is that it doesn’t give you any hope.” – Daigo

Even a weak move can be good in some regards. Sometimes you can even surprise your opponent if they are not used to fighting against these type of attacks. But according to Daigo, the issues with Thrust Strike go beyond that.

“What’s very sad about that move is that it doesn’t let you dream,” continued Daigo. “That’s the biggest problem. The move being weak is not the problem. V-Skill 1, parry, let’s you dream, right? The V-Skill 2, the Thrust Strike, doesn’t even have that.”

While Ryu’s V-Skill 1 isn’t often regarded as a top tier V-Skill, it does have some hype surrounding it if used in the correct situations. Of the two, Ryu’s V-Skill 1 is definitely the preferred choice for any Ryu user.

“You see. In times of hardship, people can endure pain because they can still dream,” stated Daigo. “As long as there is hope, people can still try and work hard. What’s bad about V-Skill 2 is that it doesn’t give you any hope, or dream.”