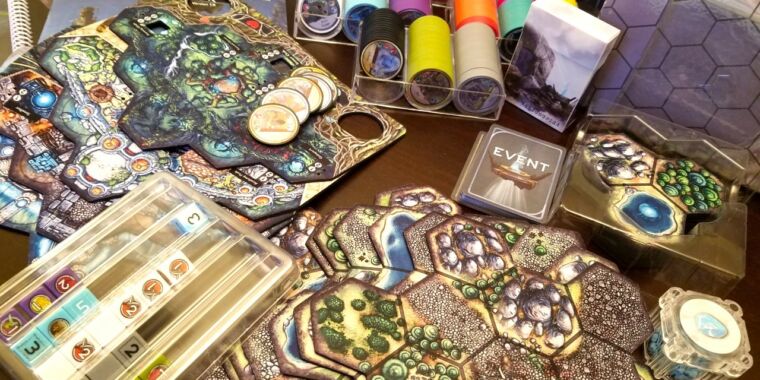 There is a lot going on here.

Welcome to Ars Cardboard, our weekend look at tabletop games! Check out our complete board gaming coverage at cardboard.arstechnica.com.

Locating the perfect tabletop MOBA is a bit like looking for a unicorn. It simply doesn’t exist and no amount of begging or fist clenching will make it appear. While the “multiplayer online battle arena” genre remains popular in the digital realm, it seems impossible to nail its feel in cardboard form. Perhaps that’s why Chip Theory Games elected to go in a different direction with Cloudspire, drawing not just from MOBA games but also real-time strategy and tower defense as well.

Little cardboard can be found in this enormous box. Units are thick poker chips, while the game’s surface is neoprene tiles that interlock to form randomized configurations. The sheer quantity of stuff in the box attempts to justify its high price tag while threatening to make you throw out your back if you don’t lift with your legs. By the end of Cloudspire’s three-hour playtime, plastic discs will be scattered about the table as if a slot machine exploded.

There is a lot going on here. The various factions to explore include warrior birds, the cast of Avatar, Groot’s family tree, and a group of bearded men, because of course. These disparate cultures are warring over a bountiful resource that has been discovered in floating islands named Cloudspires.

The structure of play is as hodge-podge as the game’s warring factions. The MOBA genre is an easy comparison, as a lot of time is spent pushing stacks of minions along a path toward  your opponent’s base. Freedom of maneuvering is limited for the majority of troops, although your selection of heroes has more autonomy. Strategy intersects with tactics as you determine the deployment formation, the line order of your processional army, and whether you group troops to protect certain valuable units.

But calling Cloudspire a mere MOBA would be lazy. The game draws equally from the real-time strategy genre. You can purchase upgrades and new technologies, unlock new units to field, and even plop down defensive towers across various choke points on the map.

The game also draws a bit on tower defense. This style of play is made explicit through the round structure. Instead of a constant, mindless creep, your various troops are unleashed in waves which mark the four distinct rounds of play. Tempo escalates as players alternate between purchasing upgrades and the lengthier Onslaught phase. Eventually, troops push through defensive lines and start bashing the castle walls.

The moments where you break away from the battling to assess your growth and potential as a faction—these are the sweetest spots to be found in the game. You’re afforded time to breathe and reassess your direction as new powers are unlocked. Placing a little plastic peg into your neoprene faction mat and gaining some bonkers new ability is delightful. It’s a shame that the bulk of play actually comes from executing the rote movement and attacks that are better relegated to processors whizzing away behind the curtain.

Cloudspire provides a mountain of additional features and mechanisms to explore. You can alter terrain on the map, you can explore many different vectors within your faction, and you can battle the neutral units littering the island. Yet I could never quite shake the feeling that the best bits of gameplay take place largely in scattered moments throughout the game.

This problem is most severely felt with three or four players, when game length drags. As dozens of units dot the field, you must juggle tiny stat lines printed on the surface of the chips. As you’re struggling to formulate your own strategy, you need to pass the various faction references around simply to understand their capabilities. The whole thing is simply too much to internalize over your first several plays, and you will have to be content in simply getting a small glimpse of the greater picture. Frustration lands as often as satisfaction; Cloudspire doesn’t always feel like it respects your time and effort.

Fortunately, the head-to-head format is much more personal. The field is narrowed and, with the burden lessened, there’s a stronger sense of control and agency. You can focus on exploring the depths of your faction instead of reeling from constant external surprises. This is where the game begins to show its potential.

That potential is most fully realized in the solo format. With a full suite of 16 solitaire scenarios, the game takes on a more narrative bent. The story of Cloudspire unfolds in a beautiful and gripping way. Each scenario functions as a puzzle, throwing scripted challenges your way with the goal of prodding your strategic thought to a certain solution. Some challenges require a specific style of play in order to best them, while others allow a little more freedom. Because of this, you will likely not want to replay a specific scenario once you’ve conquered it, and the design’s solution to this issue is to throw quantity your way. (The game even includes eight two-player cooperative missions against the built-in artificial intelligence.)

It comes as no surprise that this mode, along with other Chip Theory Games releases, was designed from the ground up as a solo endeavor. This isn’t to say the multiplayer format is slapped on, but it certainly feels as though the breadth of the system is stretched a good mile beyond its limits. As complexity collides with complexity, you will question whether there’s legitimate depth to plumb here—or whether it’s all just busy work to keep your noggin spinning. When you lower the player count and the Onslaught phase becomes leaner, these larger issues turn into minor quibbles and the fun is more discernible.

Those seeking an incredibly rich solitaire experience will find a fiercely dedicated product in Cloudspire. Its content is endless, particularly when you consider the game length, and the creativity of each faction warrants dozens of hours of exploration. While the definitive tabletop MOBA doesn’t yet exist, Chip Theory can still be proud of its creative output and outstanding physical product.