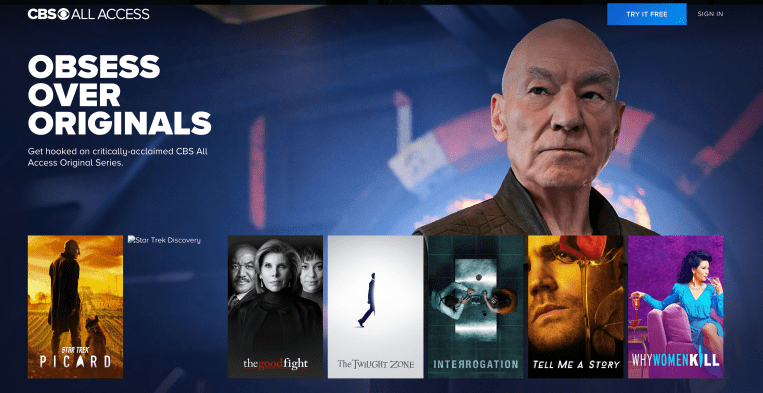 The company believes this three-tiered strategy of free, broad pay and premium content will help it to better acquire market share in the increasingly crowded streaming space, while also helping improve metrics around subscription acquisition, churn and lifetime value by offering promotions and bundles.

The new “House of Brands” product, as ViacomCBS is referring to this CBS All Access expansion, will go to market by partnering with both traditional and new distributors, including those outside the U.S.

Today, CBS All Access offers a mix of live TV, including streaming news and local broadcast stations, plus sports and on-demand video. It’s also home to a growing number of original series, including now two “Star Trek” series that bring in a dedicated fan base. The newer of these, “Star Trek: Picard,” has so far done particularly well for the company, having broken internal records for total streams and subscriber signups following its January launch.

CBS All Access will retain its existing content in the refreshed service, but the overall library will expand to include more TV and movies from across the ViacomCBS portfolio. This includes content from brands like Nickelodeon, MTV, BET, Comedy Central, Smithsonian and Paramount. In total, it’s adding 30,000 TV episodes and up to 1,000 films to the service, the company says.

ViacomCBS’ expansion plans in streaming were reported earlier this month by Variety, but only officially confirmed today.

Meanwhile, free streaming service Pluto TV now has 22.4 million monthly active users, up 75% year-over-year. The service is live today in the U.S., U.K., Germany, Austria and Switzerland, and is launching in Latin America in March.

“Our streaming foundation is not just usage. It is also financial. In 2019, our domestic streaming & digital video business – which includes subscription revenue & digital video advertising – had approximately $1.6BN in revenue.” – BB $VIAC pic.twitter.com/wX6VyOiaWc

This was the first earnings since the Viacom Inc. and CBS Corp. merger finalized in December. The newly combined company missed Wall Street’s estimates with $6.871 billion in revenue versus $7.36 billion estimated, and earnings per share of $0.97 versus $1.44 forecast. The company also reported a net loss of $258 million in Q4, a soft box office, and was impacted by cord-cutting trends.

“In less than three months since completing our merger, we have made significant progress integrating and transforming ViacomCBS,” said President and CEO Bob Bakish, in a statement. “We see incredible opportunity to realize the full power of our position as one of the largest content producers and providers in the world. This is an exciting and valuable place to be at a time when demand for content has never been higher, and we will use our strength across genres, formats, demos and geographies to serve the largest addressable audience, on our own platforms and others,” he said.

“In 2020, our priorities are maximizing the power of our content, unlocking more value from our biggest revenue lines and accelerating our momentum in streaming,” Baksih continued. “With this as a backdrop, we’ve set clear targets for the year and are providing increased transparency around our business to demonstrate ViacomCBS’ ability to create shareholder value today, as we continue evolving and growing our business for tomorrow,” he said.