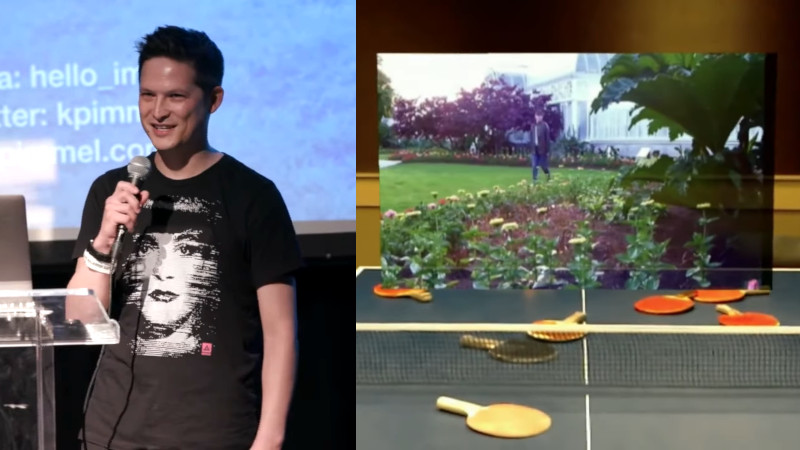 Thus far, the vast majority of human photographic output has been two-dimensional. 3D displays have come and gone in various forms over the years, but as technology progresses, we’re beginning to see more and more immersive display technologies. Of course, to use these displays requires content, and capturing that content in three dimensions requires special tools and techniques. Kim Pimmel came down to Hackaday Superconference to give us a talk on the current state of the art in advanced AR and VR camera technologies.

Kim has plenty of experience with advanced displays, with an impressive resume in the field. Having worked on Microsoft’s Holo Lens, he now leads Adobe’s Aero project, an AR app aimed at creatives. Kim’s journey began at a young age, first experimenting with his family’s Yashica 35mm camera, where he discovered a love for capturing images. Over the years, he experimented with a wide variety of gear, receiving a Canon DSLR from his wife as a gift, and later tinkering with the Stereorealist 35mm 3D camera. The latter led to Kim’s growing obsession with three-dimensional capture techniques.

Through his work in the field of AR and VR displays, Kim became familiar with the combination of the Ricoh Theta S 360 degree camera and the Oculus Rift headset. This allowed users to essentially sit inside a photo sphere, and see the image around them in three dimensions. While this was compelling, [Kim] noted that a lot of 360 degree content has issues with framing. There’s no way to guide the observer towards the part of the image you want them to see.

Moving the Camera to Match What Happens in the Virtual Environment

It was this idea that guided Kim towards his own build. Inspired by the bullet-time effects achieved in The Matrix (1999) by John Gaeta and his team, he wished to create a moving-camera rig that would produce three-dimensional imagery. Setting out to Home Depot, he sourced some curved shower rails which would serve as his motion platform. Kim faced a series of mechanical challenges along the way, from learning how to securely mount the curved components, to reducing shake in the motion platform. He also took unconventional steps, like designing 3D printed components in Cinema4D. Through hard work and perseverance, the rig came together, using a GoPro Hero 4 triggered by an Arduino for image capture. The build was successful, but still had a few issues, with the camera tending to dip during motion.

The promising results only whet Kim’s appetite for further experimentation. He started again with a clean sheet build, this time selecting a Fujifilm camera capable of taking native 3D photos. This time, a stepper motor was used instead of a simple brushed motor, improving the smoothness of the motion. Usability tweaks also involved a lock on the carriage for when it’s not in use, and a simple UI implemented on an LCD screen. All packaged up in a wooden frame, this let Kim shoot stereoscopic video on the move, with a rig that could be conveniently mounted on a tripod. The results are impressive, with the captured video looking great when viewed in AR.

With smooth camera motion sorted, Kim is now experimenting with his Creative CNC build, designed to move a camera in two dimensions to capture more three-dimensional data. This leads into a discussion of commercial options on the market for immersive image capture. Adobe, Samsung, Facebook, and RED all have various products available, with most of the devices existing as geometric blobs studded with innumerable lenses. There’s also discussion of light field cameras, including the work of defunct company Lytro, as well as other problems in immersive experiences like locomotion and haptic feedback. If you want to geek out more on the topic of light field cameras, check out Alex Hornstein’s talk from the previous Supercon.

While fully immersive AR and VR experiences are a ways away, Kim does a great job of explaining the development in progress that will make such things a reality. It’s an exciting time, and it’s clear there’s plenty of awesome tech coming down the pipeline. We can’t wait to see what’s next!