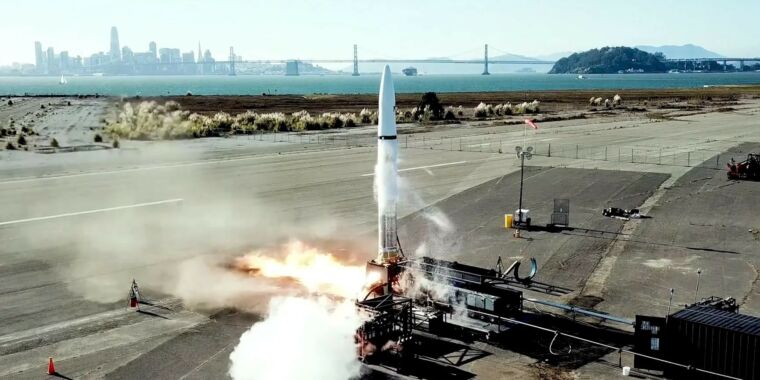 ALAMEDA, Calif.—Toward the end of an interview on Tuesday morning, Adam London finally came out and admitted it. “Honestly, we’re building a pretty boring rocket.”

This is by design, of course. His company Astra Space, which just emerged from stealth mode this week, does not want to build the sleekest or most modern of rockets. Rather, says London (the company’s co-founder and chief technology officer), Astra seeks to deliver the most bang for the buck to customers. To that end, Astra has developed a no-frills launch system. Even the company’s name for its newest rocket, “Rocket 3.0,” lacks pizzazz.

“This is not about making the best, most sexy rocket,” London said in a small conference room at the company’s headquarters in Alameda, California. “We want to make the simplest, most manufacturable rocket.”

Over the last five years, dozens of startups have emerged in the United States and around the world with flashy plans to build low-cost rockets to meet this rising demand for small satellite launch. Some are more credible and well-funded than others. But among that crowd, Astra Space currently stands out for several reasons: They are moving fast, aim to be insanely cheap, and are rigorously following an iterative design process. Perhaps most importantly, they’re willing to fail.

When London and co-founder Chris Kemp started Astra Space in late 2016, the pair imagined two fundamental pathways to get stuff into low-Earth orbit cheaply. SpaceX has already very nearly perfected one of them by building the capable Falcon 9 rocket, which is highly reliable, brawny, and increasingly reusable.”It is an incredible engineering achievement,” London said of SpaceX’s workhorse rocket. “I remain in awe of what they have done.” For highly valuable large satellites and astronaut launches, the Falcon 9 provides an optimal solution.

But the Astra team believes there is another path, too. Over the last decade, a slew of new space startups and traditional players have begun to build smaller satellites, and these companies are looking for ever-cheaper rides into space and specific orbits. These 50 to 150-kg satellites are, London says, almost disposable. Most lack extensive propulsion systems, and therefore they’ll only have a design lifetime of a few years before they get dragged back into Earth’s atmosphere. Astra Space has crafted what it sees as a solution for this, a rocket neither exquisite nor perfect. “We’re actually not shooting for 100 percent reliability,” London said. Instead, Astra is willing to trade a small amount of reliability for a big cost savings.

And it’s betting customers will as well.

London and Kemp met about five years ago, following an introduction by Robbie Schingler, co-founder of the satellite company Planet. As a former Chief Technology Officer at NASA, entrepreneur, and gifted fundraiser, Kemp was taken by London’s engineering work designing very small rockets. Under one grant from the US Defense Advanced Research Projects Agency (DARPA), London had designed a rocket to launch a single 3U CubeSat, weighing less than 5kg, into orbit. The rocket, which never launched, had a diameter of less than half a meter.

The more London and Kemp talked, the more they liked the idea of building a rocket using some of the technologies that London had honed over a decade at his small start-up, Ventions. These included an electric pump to pressurize rocket fuel before it enters the engine chamber, a lower-weight alternative to a turbopump. When the pair founded Astra Space in October 2016, London brought over about 10 employees from Ventions and some preliminary rocket engine concepts.

From there, Astra moved quickly, designing the first version of its booster, called Rocket 1.0, throughout 2017. At the same time, the team modified a test site literally next door at the former Alameda Naval Air Station, which had two large tunnels for jet engine testing. Here, throughout that first full year, they would perform hundreds of first-stage engine tests indoors.

By the spring of 2018, the company was ready to launch its first rocket, which included five first-stage engines and a chunk of metal for the second stage. This rocket was never designed to reach orbit from its launch site at the Pacific Spaceport Complex in southern Alaska, on Kodiak Island. In fact, due to some components used, the first stage engines were only capable of firing for about 60 seconds. Kemp said this first flight’s primary goal was to not hurt anyone and, secondarily, to hopefully not destroy the launch site. The rocket ended up launching and performing reasonably well for its minute-long mission.

This experience gave the team confidence to refine its design for Rocket 2.0, which was developed during the summer of 2018 and launched in November of that year. This rocket had more components of a second stage, but it still lacked an engine, so it also could not put a payload into orbit. However, Astra hoped the rocket’s first stage would fire long enough for the rocket to breach the Kármán line, the internationally designated boundary of space 100km above the Earth’s surface. Disappointingly, due to an issue with a “speed controller,” the rocket did not make it that far, terminating flight early. Even so, Kemp said the mission met about 75 percent of its overall objectives.

Astra, which now has 170 employees, spent the entirety of 2019 designing and building Rocket 3.0. Kemp and London do intend for this version to reach orbit, and they have made significant changes to the overall design accordingly. Notably, London doubled the performance of the first stage engine, named Delphin after a Greek sea God, from 3,000 pounds of thrust at sea level to 6,000 pounds. (The upper stage engine is named Aether, after the pure “upper sky” air breathed by Greek gods.) Engineers also overhauled the avionics, switched to a “common dome” design between the liquid oxygen and kerosene propellant tanks, and more.

If all goes well, the first Rocket 3.0 will launch within “single digit weeks” from Alaska. The actual date will be determined by DARPA as part of its Launch Challenge to support rapid, reliable launch capabilities. Of the 18 teams that originally entered the contest—including a major industry player Virgin Orbit and a now-bankrupt Vector—only Astra still has a chance to win the $12 million prize. Kemp said the first Rocket 3.0 has already completed a static fire test at a site south of Sacramento, the former Castle Air Force Base, but the rocket has not yet been shipped to Alaska. (The company plans to launch polar missions from Alaska. It also will likely lease a site in the Kwajalein Atoll from the US Army for equatorial and mid-latitude inclinations).

If Astra makes it to orbit this year, it would do so remarkably fast for a private company developing a new, liquid-fueled rocket. SpaceX holds the current record, taking six years and four months from its founding to reaching orbit with its Falcon 1 rocket. Rocket Lab, the other startup with an orbital rocket, required more than 11 years. Other companies that may make orbital launch attempts this year include Virgin Orbit (founded December 2012) and Firefly (January 2014). Launching successfully any time before October would mean that Astra reached space in less than four years.