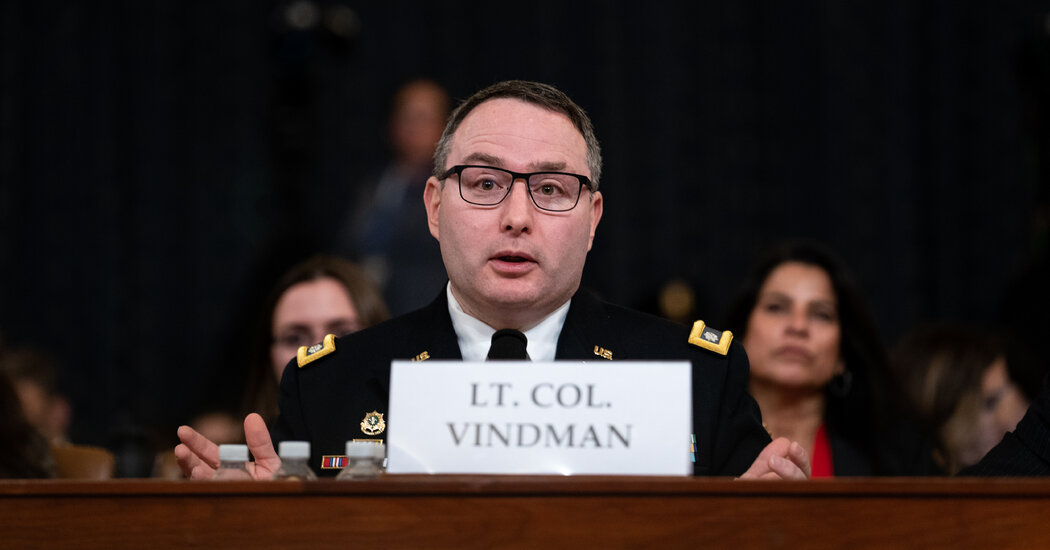 An Army officer who was a key witness during the impeachment inquiry into President Trump last year and later retired after what he called a campaign of bullying and intimidation by the president and his allies, sharply criticized the administration on Saturday and said he would use his new civilian status to champion national security issues ahead of the elections in November.

Lt. Col. Alexander S. Vindman, a decorated Iraq war veteran who served on the staff of the White House’s National Security Council, accused the administration in an op-ed in The Washington Post of using Soviet-style tactics to punish dissenters. He added: “At no point in my career or life have I felt our nation’s values under greater threat and in more peril than at this moment.”

In his role as a Ukraine expert on the National Security Council staff, Colonel Vindman was on the July 25, 2019, phone call Mr. Trump had with Ukraine’s president that became a central element of the impeachment inquiry. Colonel Vindman testified in the House impeachment hearings that it was “improper for the president” to coerce a foreign country to investigate a political opponent.

“Our citizens are being subjected to the same kinds of attacks tyrants launch against their critics and political opponents,” Colonel Vindman, whose retirement from the Army after more than 21 years of service took effect Saturday, said in his op-ed. “Those who choose loyalty to American values and allegiance to the Constitution over devotion to a mendacious president and his enablers are punished.”

Colonel Vindman, who plans to pursue a Ph.D. in international relations at Johns Hopkins University’s School of Advanced International Studies, said he intended to speak out on a range of issues.

“I will demand accountability of our leadership and call for leaders of moral courage and public servants of integrity,” he said. “I will speak about the attacks on our national security. I will advocate for policies and strategies that will keep our nation safe and strong against internal and external threats.”

People familiar with Colonel Vindman’s plans said he was likely to focus on the United States’s so-called great-power competition with Russia and China, but was still deciding on how and in what form to weigh in.

A spokesperson for the National Security Council declined to comment on Colonel Vindman’s remarks.

Colonel Vindman was among scores of officers who had been picked to be promoted to full colonel this year. Typically, such promotions are backed by Army and Pentagon officials before moving to the White House for final approval, and then to the Senate for a confirmation vote.

But Colonel Vindman told friends and family that he felt increasingly pessimistic that he had a meaningful future in the Army, and opted to retire.

Hours before Colonel Vindman was marched out of the White House in February by security guards, Mr. Trump foreshadowed his fate. “Well, I’m not happy with him,” the president told reporters when asked whether Colonel Vindman would be pushed out.

“The circumstances of my departure might have been more public, yet they are little different from those of dozens of other lifelong public servants who have left this administration with their integrity intact but their careers irreparably harmed,” Colonel Vindman wrote on Saturday.

Colonel Vindman said that despite his personal turmoil, he remained hopeful about the future of his family and the country. He said he has received messages of support from “tens of thousands of Americans.”

“Impeachment exposed Trump’s corruption, but the confluence of a pandemic, a financial crisis and the stoking of societal divisions has roused the soul of the American people,” he said. “A groundswell is building that will issue a mandate to reject hate and bigotry and a return to the ideals that set the United States apart from the rest of the world. I look forward to contributing to that effort.”