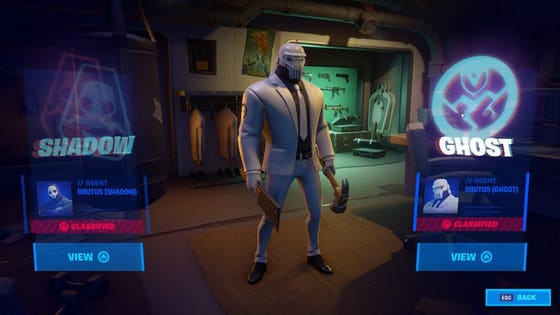 This season, Fortnite players are being asked to commit different battle pass skins to one of two different spy organizations, GHOST or SHADOW. I assume these are acronyms, but I don’t know what they stand for, and I don’t want to keep writing them in all caps, so that’s the last time I’ll be doing that.

You do one final “loyalty” quest for one side or the other, and unlock a permanent alternate style for the character in either the Ghost or Shadow spy factions.

Well, who are people picking so far? The Brutus choice is available this week, and Epic is running a poll to see what people are picking. At the time of this writing there are 126,000 responses, representing at least some solid chunk of the active Fortnite playerbase. And I was pretty surprised by the results:

There are two days left in the poll, but it’s almost a dead even split. I am showing 50.8% for Ghost, 49.2% for Shadow, which is closer than I would have imagined. I figured one side or the other would have an advantage, though I do wonder if this will change with other characters down the road. This is just for Brutus, and I will say that both his Ghost and Shadow skins are equally cool, hence the split. The other choices? At least for TNTina, Skye and Midas, it’s more or less just changing the color of their clothes. Brutus and Meowscles are the two skins with more involved changes.

This isn’t all just for fun and style points, however. In the HQ menu screen, there is a computer that shows an upcoming “Shadow versus Ghost” event that is “Coming Soon.” We don’t know what this is, but my guess is that you will be asked to use “committed” Shadow or Ghost characters for whatever that event ends up being, meaning these choices will actually play into whatever that mode is. It could just be some sort of team-based LTM. Or it could, theoretically, be something larger, where depending on which side emerges victorious, that alters the fate of the island going forward (if say, for example, Ghost fails to stop Shadow from blowing up Steamy Stacks or something).

Anyway, it’s a very cool mechanic and part of why I have been finding this season engaging, in addition to all the other on-map spy stuff with Henchmen and ID scanners and cool locations. We’ll see if this poll changes now or for future characters, but we could be in for a pretty even split by season’s end, if this is any indication.