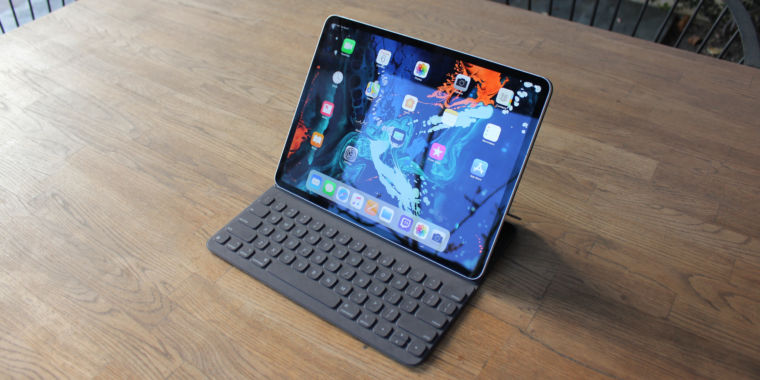 Yet another step in a markedly different direction for the platform.

Apple has developed a trackpad-equipped keyboard attachment for the iPad Pro and plans to introduce it alongside its new iPad Pro models sometime this year, a report from The Information claims. The report cites one unnamed person familiar with the matter, and it asserts that Apple has been considering this move for several years.

This would make Apple’s iPad Pro compete more directly with Microsoft’s Surface lineup, 2-in-1 convertible laptops, and various Chrome OS devices. Apple’s iPad has sold well in the marketplace, but power users often complain that its interface is not always suitable for heavy duty work.

Apple tried to address many of those complaints with iPadOS, a branch from iOS first released last year that greatly expanded multitasking, file management, and other productivity features of the iPad. We examined several of these changes in our iPadOS review last year and concluded that while many of the changes are successful, it led to a sort of conflicted identity for the platform.

The company also gave users the ability to control iPadOS with a mouse pointer, but that is an accessibility feature specifically designed for users with disabilities. Meanwhile, pointer control behaves differently from what users without disabilities are generally looking for in a number of ways that we also explored in our review.

According to The Information’s source, the new keyboards would be made by Foxconn, a major manufacturing partner to Apple that operates primarily in China. The report did not provide much insight on how the spread of the coronavirus might affect this product’s launch, though there have been other reports of supply-line problems with Foxconn and other Apple partners in China that may impact the launches of Apple products planned for 2020.

Numerous rumors previously suggested that the iPad Pro refresh was due in the next couple of months, but the coronavirus-related supply struggles have led to uncertainty about Apple’s plans. The refreshed tablet is surely still coming, but the timeline is unclear. If this report is true, it looks like this update could be about more than just nicer cameras and faster processors.