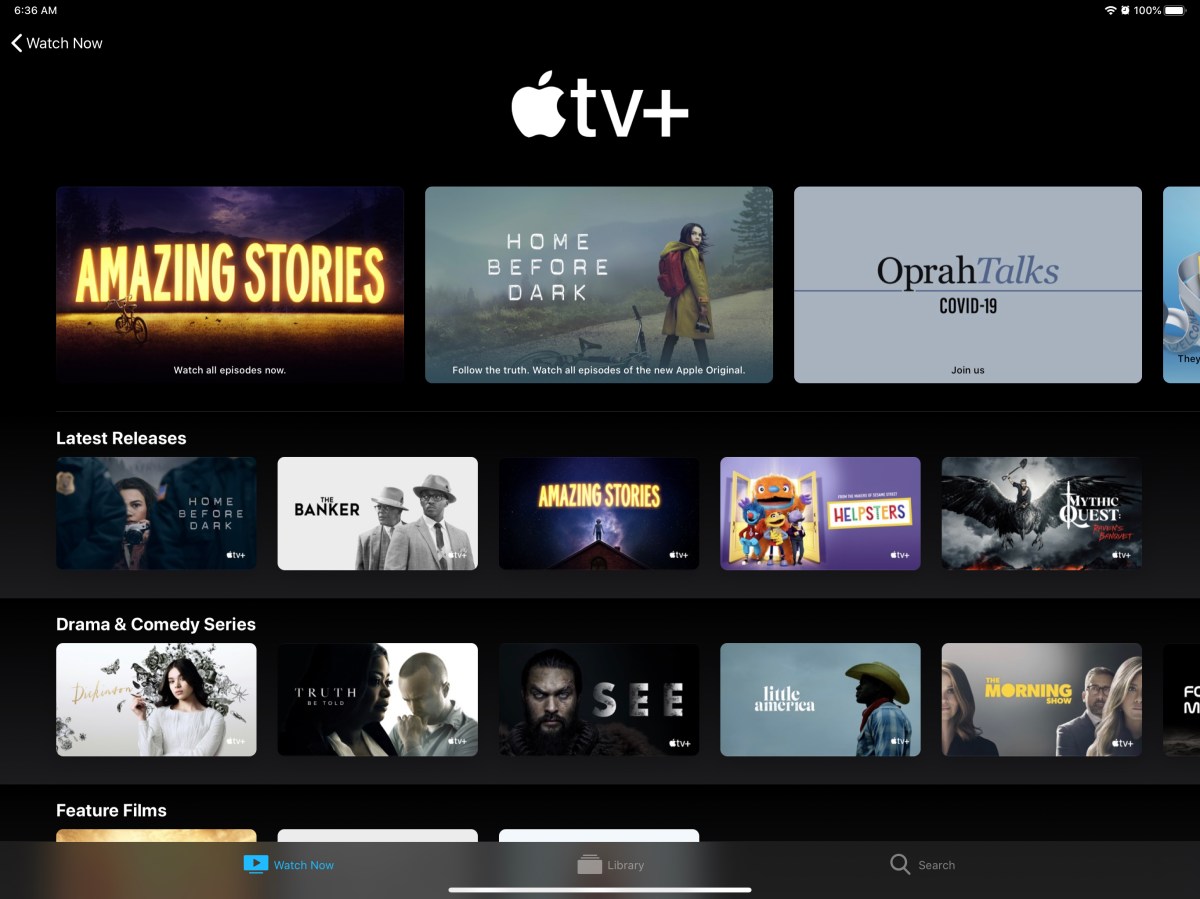 Ahead of last November’s launch of the Apple TV+ video streaming service, Apple seemed to be doing nearly everything it could to widen the base of early viewers — it gave away a free year of service with any newly purchased iPhone, iPad, Mac, iPod, or Apple TV, then added free access to student Apple Music subscriptions, collectively guaranteeing itself millions of (unpaid) users. But that apparently wasn’t enough: Starting today, the company will offer free access to seven complete TV+ series to almost any person with an Apple ID.

Apple’s video strategy has continued to stand in stark contrast to Disney’s, though both companies launched paid streaming services last year. Disney+ offers a mere seven-day free trial before charging $6.99 per month or $69.99 per year for access to a large catalog of new original and historic Disney, Pixar, Marvel, Star Wars, and National Geographic content, plus The Simpsons. This week, Disney+ surpassed 50 million subscribers across only a dozen countries, and it has recently rewarded quarantined fans by providing early access to its latest animated films, including Frozen II and Onward.

The contrast in paid user uptake should be at least somewhat concerning to Apple investors and potential content partners. In 2019, Apple was supposed to be pivoting toward paid subscription services as its next growth engine, but its News+ service has struggled to attract customers or satisfy publishers, TV+ shows no signs of generating revenue to offset multi-billion-dollar outlays, and there’s little sense of how many customers are using the company’s other 2019 service offerings, Apple Arcade and Apple Card. Moreover, the company seems to be willing to continue funding TV+ shows regardless of critical or popular response — a surefire way to burn cash creating more content users haven’t proved willing to buy.

To Apple’s credit, the most recent giveaway could be viewed as an enticement to sign up for TV+ during the COVID-19 pandemic in hopes that viewers will be interested in watching other Apple shows. To lure these prospective viewers, Apple is widening access to three adult dramas (For All Mankind, Little America, Servant) and four kid- or teen-friendly shows (Dickinson, Ghostwriter, Helpsters, Snoopy in Space), plus The Elephant Queen documentary. HBO is attempting something similar by offering free access to part of its video library through HBONow and HBOGo, while CBS All Access and Epix have opened nearly their entire TV and movie catalogs for temporary free viewing.

Yet any hope of converting free Apple TV+ streamers into paying customers may be misplaced. Having launched with a tiny lineup of shows, TV+ remains largely uncompelling six months later, with rare exceptions like Mythic Quest barely making up for high-profile flops like Amazing Stories and See. It’s fair to call even the best TV+ shows uneven, sometimes jarringly so, while other series’ worst episodes are bad enough to make viewers walk away in the middle of a season.

Disney’s theme parks, cruise ships, and theatrical releases certainly face significant business challenges due to the ongoing COVID-19 crisis, but there’s little question at this point that the company chose the right formula to succeed in the competitive video streaming market. As Netflix, Hulu, and Amazon Prime Video have demonstrated, new shows alone aren’t enough to win a critical mass of long-term streaming subscribers — customers also expect to fall back on a back catalog of compelling content. For $6.99 a month, the Disney+ catalog has enough memorably excellent family-friendly content to entertain viewers for many months, while at $4.99 a month, Apple TV+’s entire collection can be watched (and generally forgotten) in weeks.

Though some might downplay any rivalry between Apple TV+ and Disney+, the reality is that the video subscription services are directly competing for users’ limited subscription dollars and attention. Disney’s then-CEO Bob Iger exited Apple’s board of directors due to competition between the services and more recently changed positions within the company, focusing his time almost exclusively on Disney’s video content businesses.

That was a prescient move: Streaming video services are only going to grow in importance as people become accustomed to staying at home and avoiding movie theaters. Some companies will still make plenty of money from that transition; others will continue to bleed cash and struggle to demonstrate a value proposition worth actually paying for.