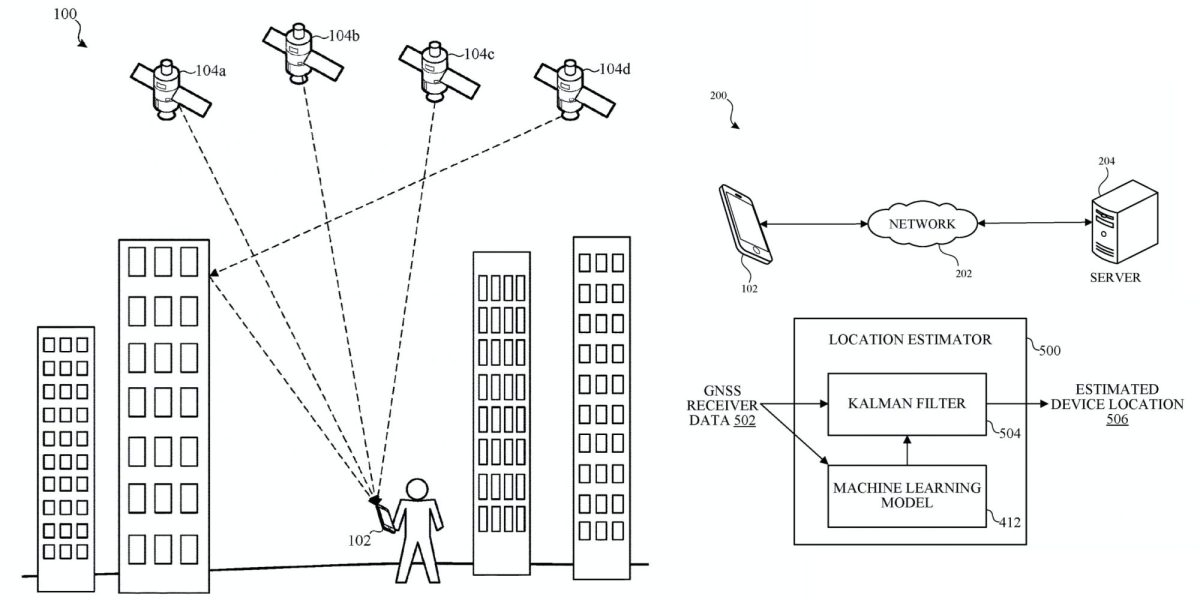 GPS and similar navigational systems rely on orbiting satellites to triangulate users’ locations, a process that’s inherently susceptible to inaccuracy due to the vast distances between satellites and moving users on the ground. But Apple thinks it can improve location accuracy by applying machine learning to Kalman estimation filters, a just-published patent application reveals.

The basic concept is that while navigation systems generally rely on live location-determining pings from multiple satellites — a process that can take precious time, during which the user may move — a machine learning model can be trained to provide interim location estimates for the user based on previously gathered data from the environment. For instance, a given city block might have fairly constant satellite signal reflection characteristics, commonly introducing errors into user location readings, so machine learning could counterbalance the inaccuracies.

While GPS is the best-known satellite location system, Apple’s application goes beyond it to include various types of global navigation satellite systems (GNSS), assuming in each case that each triangulation of raw satellite data and the machine learning-corrected version will be handed off to a Kalman linear quadratic estimation filter. The result will be a single estimated device location at any moment in time, consistent with data from both the current user and the machine’s training.

Users of virtual and augmented reality headsets might recognize the underlying premise here as a sky-to-ground parallel of machine learning techniques used to correct ground-level SLAM tracking in headsets such as Oculus Quest. While sensors and cameras do much of the heavy lifting, Oculus Insight also uses a machine learning model trained at multiple early testers’ homes and environments to compensate for common local positioning errors, making the experience feel smoother for wearers.

Many companies have been working toward more accurate location services, in some cases planning to use 5G cellular for centimeter-level accurate mapping, as well as introducing dual- or tri-band reception to simultaneously canvas multiple types of GNSS satellites. Using machine learning to let devices account for a specific area’s known interference factors may add another arrow to navigation systems’ quivers.

Apple’s patent application was officially published today after a quiet filing in August 2019. As a largely software-based implementation, it could be added to the company’s navigation software at any time or remain in the labs indefinitely. The company has previously acquired companies such as Coherent to aid the speed and accuracy of its devices’ location services.