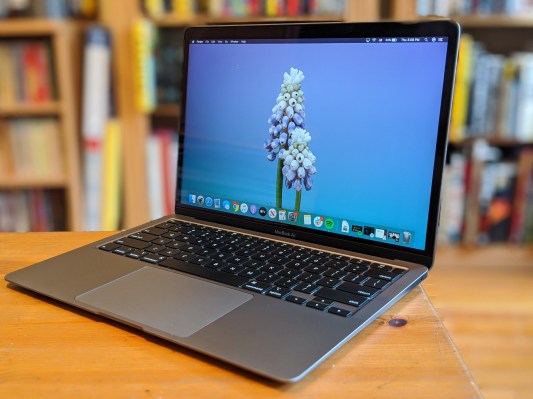 Let’s address the elephant in the room. There’s an undeniable irony reviewing an ultraportable laptop when you’re not allowed to leave your house. Of course, Apple didn’t see this coming. None of us did, with the possible exception of Bill Gates, I suppose.

I bring this up not as a reminder of everything that’s wrong with the world at the present moment — you certainly didn’t need a reminder of that. Instead, I just figured it was important to note here that the testing situation is less than ideal for the MacBook Air. I haven’t left my one-bedroom New York City apartment with the thing since it arrived this morning.

In fact, I’ve mostly been working with the laptop sitting directly in front of a larger computer. One that’s big and not designed to be moved. I was feeling adventurous, however, so now I’m sitting on my bed, writing this with the Air on my lap. Damn, it feels good to live again.

There’s not a lot I can tell you about the MacBook Air that you don’t already know. One of the mainstays of the MacBook line, the Air turned 12 in January. It’s a testament to the original that the design still feels fresh well over a decade into its existence. There have been important updates to the device over the years, of course, but the laptop that hit the market nearly a year to the day before Barack Obama’s first inauguration still very much forms the foundation of the device. 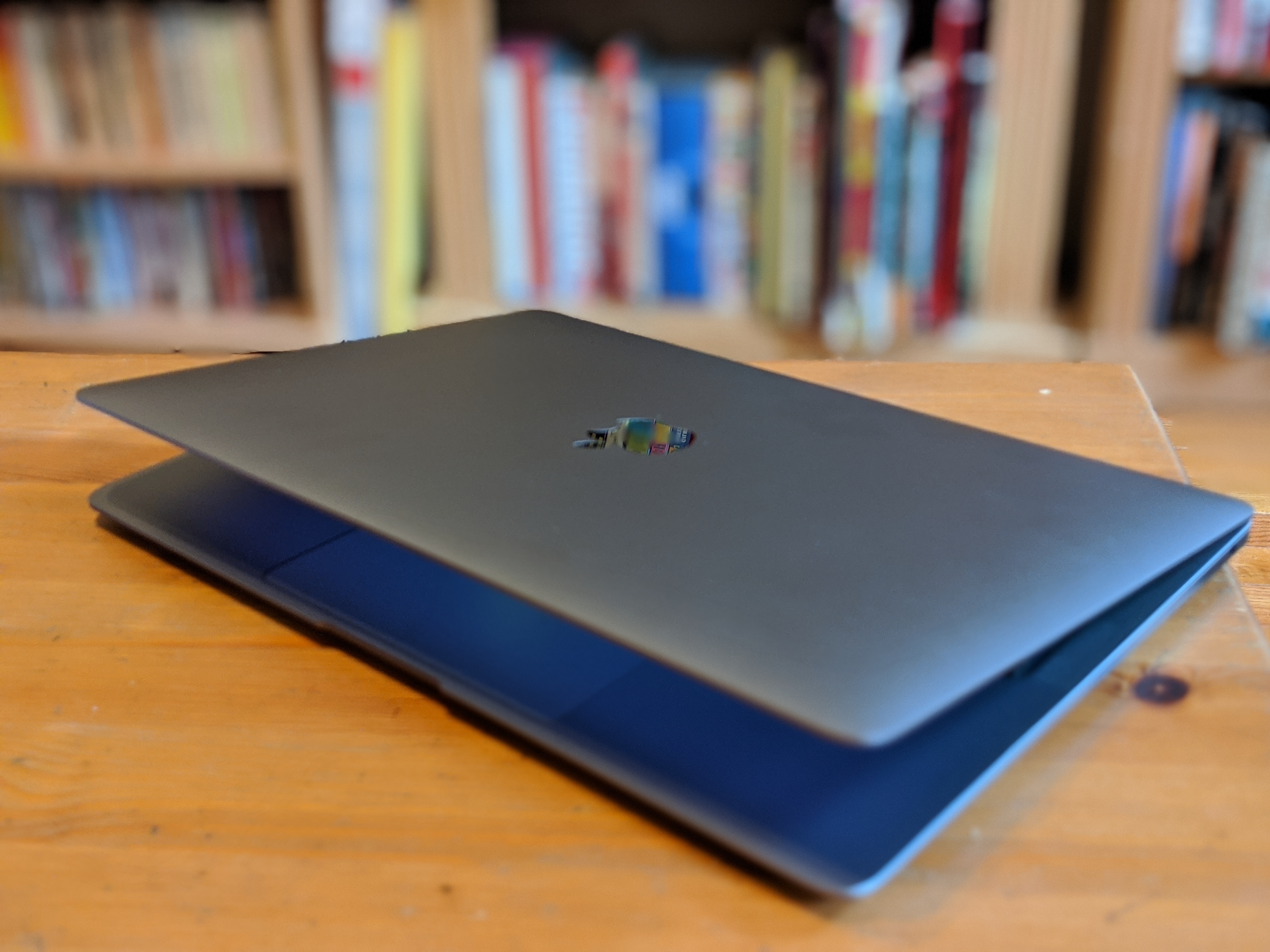 “Thin” and “light” are still very much the qualities that define the Air. It’s a product that trades the processing power of the rest of the MacBook family in favor of a design that slips comfortably into the seat-back pocket in front of you on the plane. Indeed, the device has never been the one you want for heavy video processing or other resource-intensive applications. And while the 2020 model gets some important internal updates, that remains the case here.

If, however, you’re worried about lower-back pain, this is probably the MacBook for you.

The familiar wedge shape is in tact, of course. A few generations ago, that design was married with the prevailing aesthetic of the rest of the MacBook line, with a unibody design and reflective Apple logo up top.

There are still just the two Thunderbolt 3/USB C ports onboard. Once again, they’re both on the same side. This has always been one of the bigger complaints since the redesign. Two on either side would be the best-case scenario, but until then, I’d settle for one on either, so as to avoid blocking the other one and to make it easier to plug the power cable into either side, depending on where you’re sitting relative to the outlet.

The biggest design change to the 2020 is much more subtle, however. After a rough couple of years for MacBook keyboards that culminated with a couple of consumer suits and countless jammed keys, Apple introduced a new design on last year’s 16-inch MacBook Pro. Mercifully, that upgrade has also come to the Air.

The system has returned to a scissor-switch design, which, among other things, results in more key travel, meaning the keys actually retract as you type, like a traditional keyboard. It’s like night and day, honestly. The butterfly mechanisms were a clear misstep for the company. In addition to lacking the tactile feedback, the fact that they were more or less flush with the laptop meant that if any debris got stuck in there, the key might just stop working. I had at least one instance of requiring some emergency compressed air at an event after the S key jammed. That’s an important key, mind. 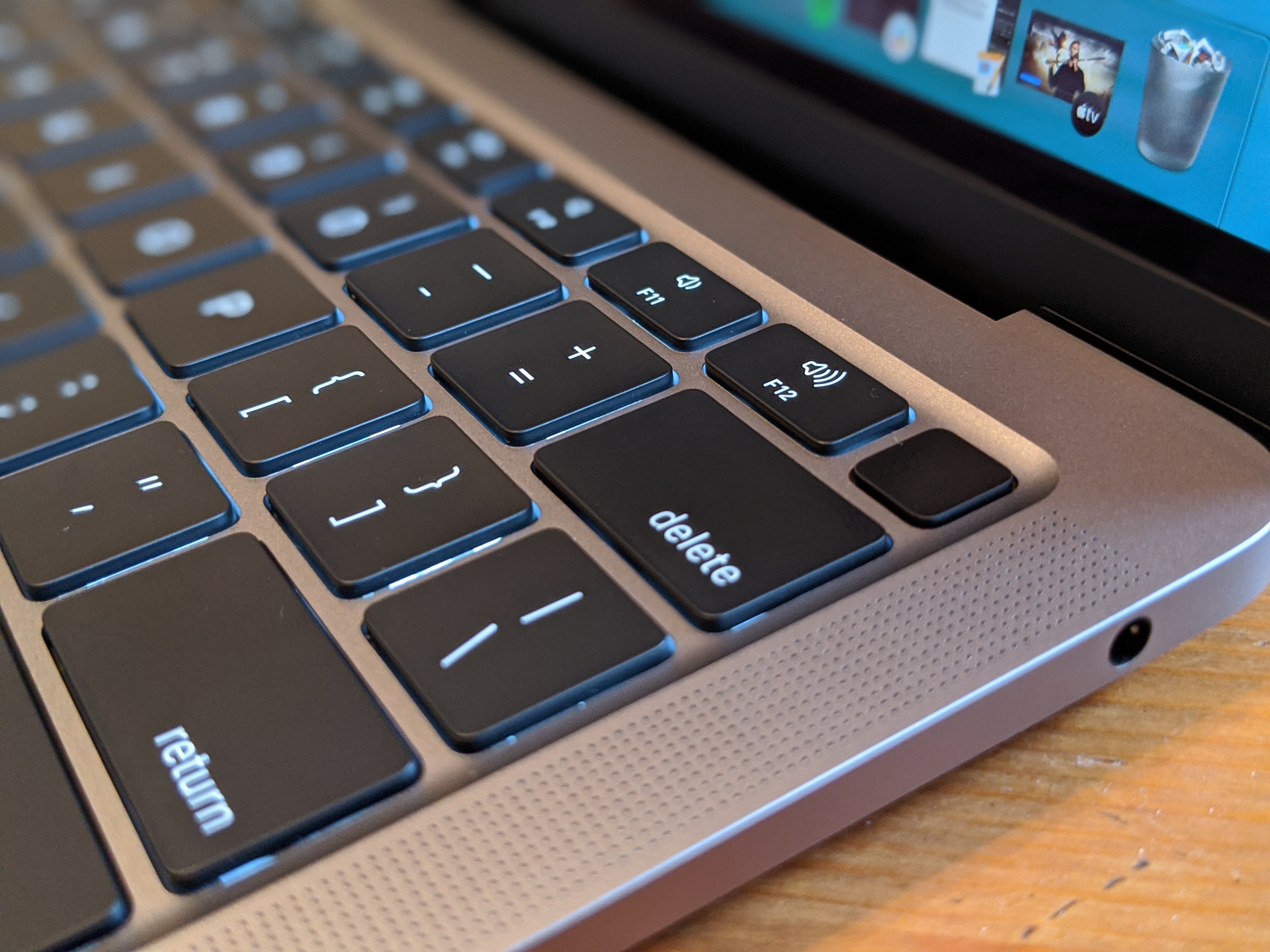 Unlike other iterative attempts to update the butterfly mechanism, the move back to a scissor switch is a marked improvement. The keys are still relatively soft compared to other systems, but the feel is much improved — not to mention not as loud while typing. The feeling here is pretty similar to what you get with Apple’s Bluetooth Magic Keyboard peripheral. Honestly, that makes it a valuable upgrade in and of itself. There’s no Touchbar up top, instead opting for the standard function keys. The best part of the Touchbar setup — TouchID — is present, however.

A lot about the Air remains unchanged from the big 2018 overhaul. That was, of course, the first major update in some time, bringing, most notably, the Retina display to the model for the first time ever. That’s a 2560 x 1600 IPS. It’s higher res and much better viewing angles than previous models — a big update for a model that many thought had been largely abandoned by Apple.

That’s still here. What is new, however, are some key upgrades to the inside. The default configuration ships with a tenth-generation 1.1GHz dual-core Intel Core i3. While the device has evolved over last year’s eighth-generation chip, that model shipped with the Core i5 standard. Apple’s clearly made some calculations to drop the base price of the system from $1,099 to $999. Apple likely wants to further differentiate the device from the rest of the line.

For even basic users, however, I’d recommend adding $100 back onto the system price in order to upgrade to an i5. That’s the chip ours came with. The system scored 5244 and 14672 on Geekbench 4’s single and multi-core tests, respectively, presenting a marked upgrade over the last model we tested, back in 2018. 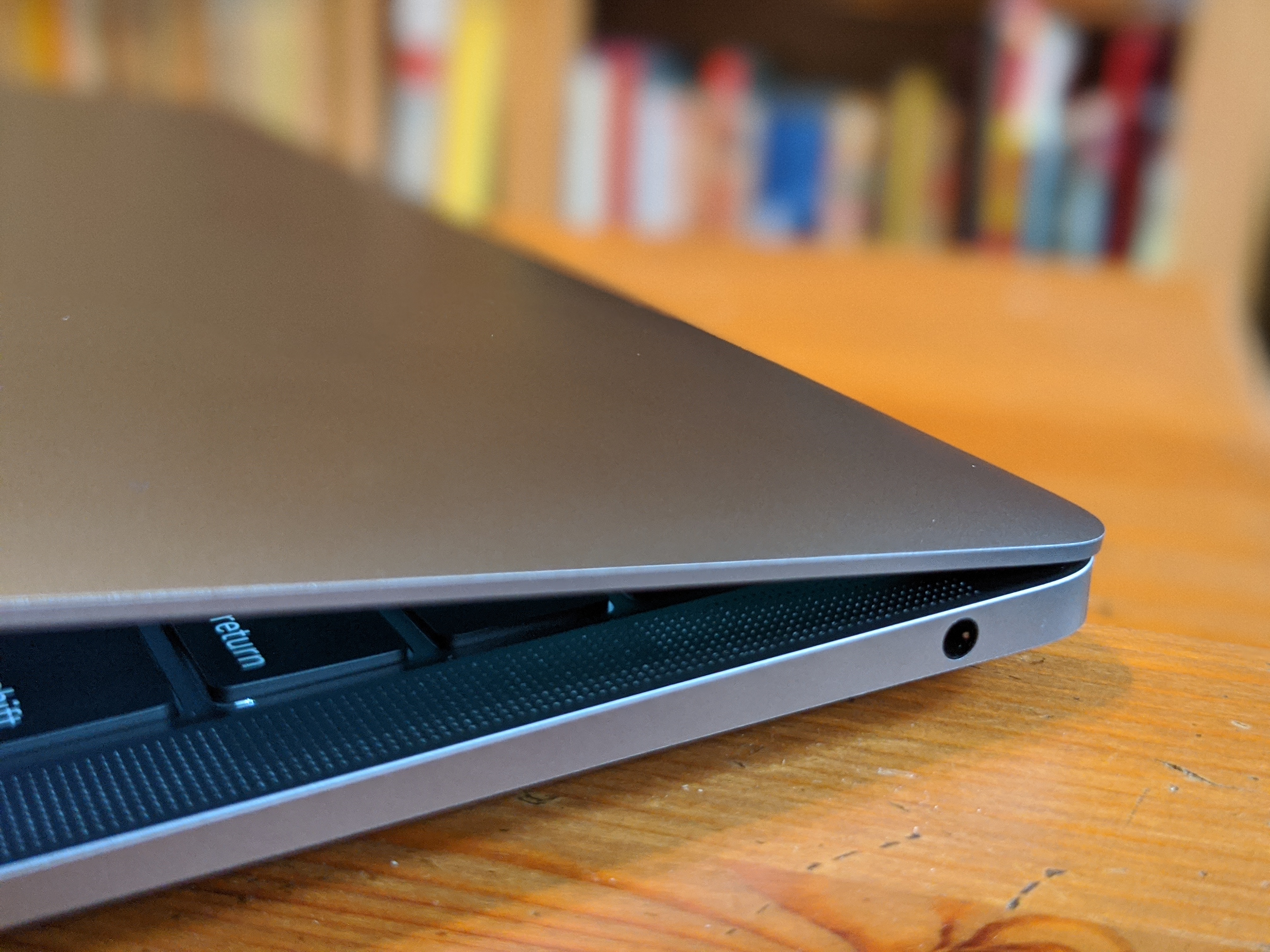 The other meaningful update to the silicon is the switch from Intel UHD 617 to Iris Plus graphics. Among other things, that will help with the ability to support external monitors. The Air is capable of supporting up to a 6K external monitor, with help from display compression. RAM is once again 8GB by default (as in our configuration), upgradable to 16GB. Much bigger news on the storage side, however, as that’s been upgraded to 256GB on the base model (up from 128GB), and can be configured all the way up to a generous 2TB (from 1TB).

Interestingly, the stated battery life has actually contracted, from 12 down to 11 hours. That, of course, largely depends on usage. After several hours, I’m down to 35% left. I’ve had the brightness and everything else at default levels and have mostly been typing, using Chrome and Slack and listening to music on headphones via Spotify (along with the occasional benchmark).

All-day battery life seems like a fair enough description, when you’re multitasking; 11 hours is probably a stretch. It’s worth noting that this can vary quite a bit based on a number of factors. I’ve only really had a full day with the laptop, so I’ll update retroactively. 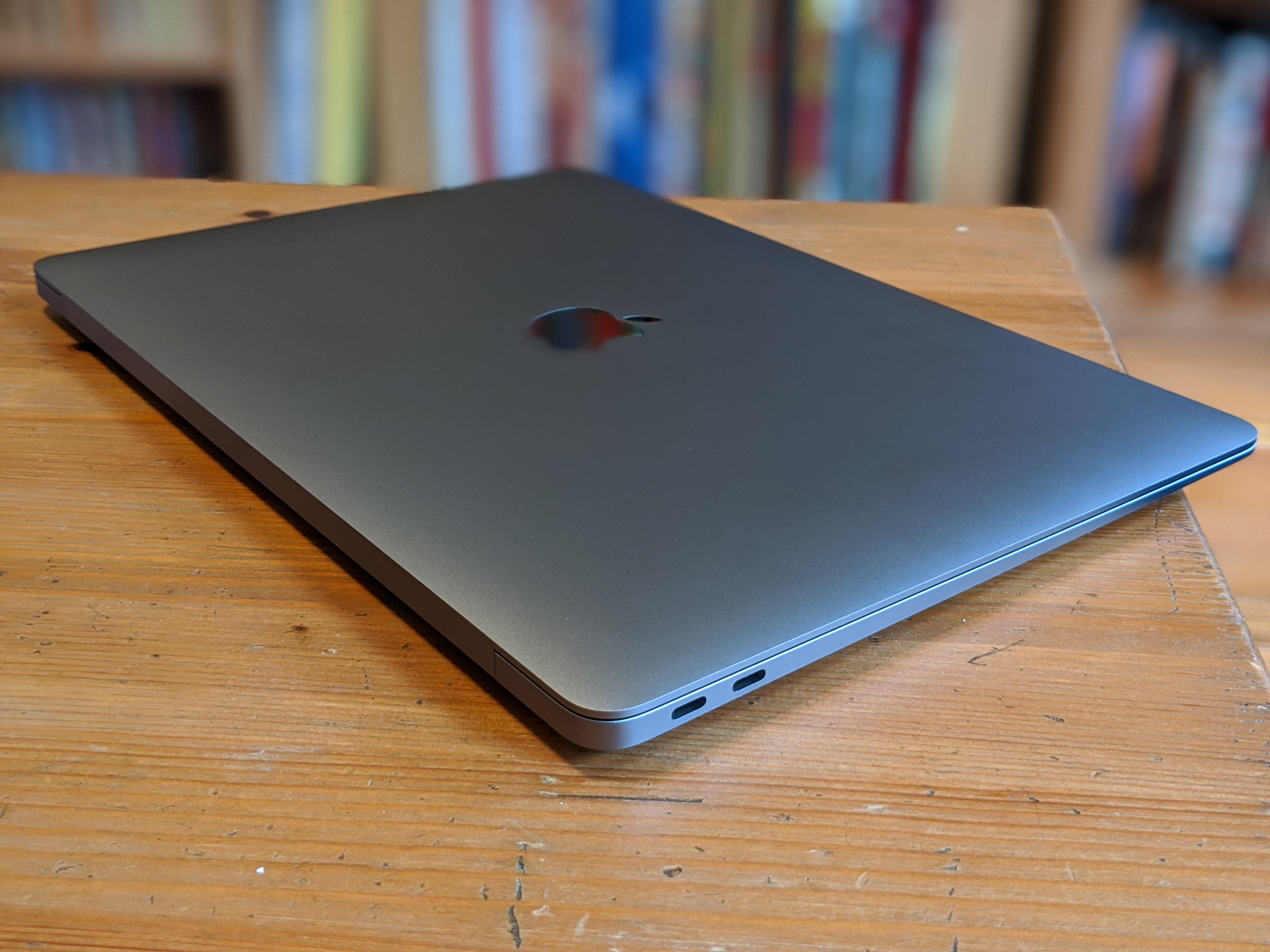 There are some nice upgrades here. Between the keyboard, processor and the overhaul the model got back in 2018, it’s nice to see Apple keeping the beloved line fresh a dozen years after it was first introduced.

I suspect that, for many, the fact that the laptop was introduced alongside the new iPad Pro (and its new keyboard) drove home how much the lines between the products are continuing to blur. The question comes up a lot when critics talk about Apple, as the company has traditionally taken a relatively minimalistic approach to product lines, versus, say, Samsung’s tendency to provide a wide range of different products.

But as personal computing has become more complex, so have our needs. And so, in turn, has Apple’s lineup. For a while there, it seemed like the MacBook Air was going to fade away, in favor of the standard MacBook. Ultimately, however, the Air won out, and understandably so. The focus on portability is a strong selling point, when coupled with the workflow versatility of MacOS (versus iPadOS). The Air looks like it’s going to be sticking around for a bit, and that’s something for Apple users to be thankful for.