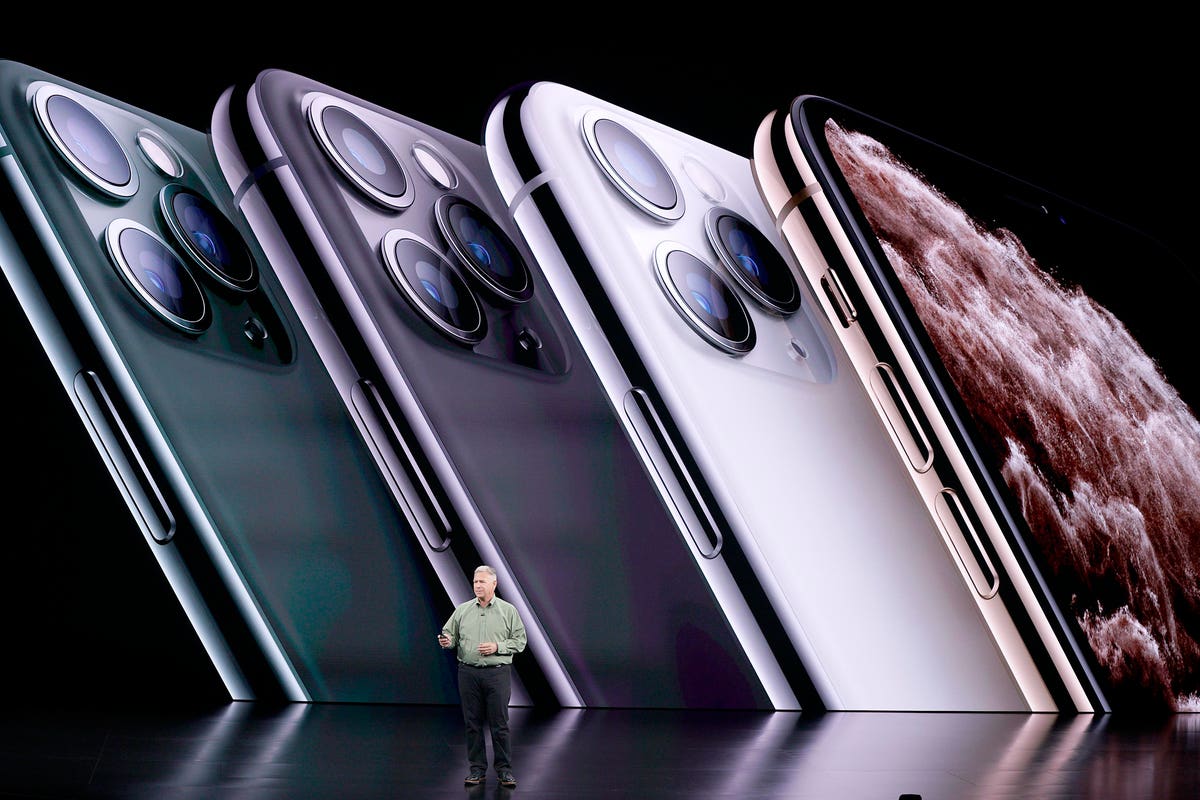 Taking a look back at another week of news and headlines from Cupertino, this week’s Apple Loop includes an expensive iPhone bug, iPhone 12 benchmarks, a stunning new Apple camera, iPhone 9 production begins, the mystery of the iPhone 9 Plus, the new MacBook Air, the iPad Pro keyboard, a Mac Mini update, and Apple limits stock.

Apple is facing a “serious iOS 13 cellular bug” which is causing iPhones stay connected to cellular data while downloading data. This is causing users to run up huge bills with no fix in sight – not even in the upcoming beta of iOS 13. Apple has yet to address the issue in an official capacity. Forbes’ Gordon Kelly reports:

“Complaints about this can be found in multiple forums, including Reddit and Apple’s Support Communities… impacting every iPhone model and every version of iOS 13, including the latest iOS 13.3.1 release. The problem always takes the same form: users navigate to Settings > Cellular > Cellular Data (either by chance or because of a big bill) and find a mysterious entry called ‘Uninstalled Apps’ which is steadily consuming data.

“For some, the total only uses kilobytes but for others, it can hit gigabytes a day and affected users are being told Apple has been aware of the problem for some time.”

All The Power In The Promise Of The iPhone

The iPhone 12 has popped up on Geekbench and the numbers are not just impressive, but will comfortably allow Apple to call the new iOS-powered smartphone the iPhone 12 as ‘the most powerful iPhone ever’. Wesley Hillard reports for Apple Insider:

“New Geekbench testing …purporting to be from the A14 processor shows the first A-series processor to cross the 3.0 GHz mark. The 12.9-inch iPad Pro has an A12X chipset with 8 cores and scores 1110 on a single core, and 4568 on the multi-core. The scores for the alleged A14 go beyond even that.”

Rive taken a look at the impact of the specs here.

As well as the reveal in the benchmarking, Apple also talked about one of the upcoming iPhone 12 features, albeit in the form of the same rumoured LiDAR feature for the iPhone showing up ni the launch of this week’s iPad Pro”

In announcing its new 2020 iPad Pro range, Apple made it clear what the headline change was: a “Breakthrough LiDAR Scanner” which can measure the distance to surrounding objects up to five metres away. It works both indoors and outdoors and operates “at the photon level at nano-second speeds” to 3D map the environment and “unleash scenarios never before possible.”

“It is so advanced, it’s being used by NASA for the next Mars landing mission. And it’s now been engineered to fit in the thin and light iPad Pro,” states Apple. Later this year, it will also fit in the iPhone 12 range. This is the news we have known for months, but what initially seemed underwhelming now makes perfect sense.

Apple Is Building Your iPhone 9

Apple’s upcoming iPhone 9 – seen by many as the spiritual successor to the iPhone SE – will bring a cheaper handset back to the front line (coronavirus notwithstanding). Reports suggest that production on the consumer units has started. James Rogerson reports:

“This is also largely in line with what we’d heard previously, with sources a couple of weeks ago claiming that the iPhone 9 had entered the final stages of engineering validation.”

One of the advantage of the upcoming iPhone 9 in the eyes of many is the smaller size – it’s not as small as the 4 inch screen on the iPhone SE, but it is smaller than most leading handsets. Still, if you want bigger iPhone without stepping up to the iPhone 11, you might be in luck. Filipe Espósito reports:

“9to5Mac has learned several new details about the upcoming iPhone 9 based on iOS 14 code. Now we’ve discovered evidence that Apple is also working on a larger “iPhone 9 Plus” — not only an iPhone 9 — to replace both iPhone 8 and iPhone 8 Plus. While rumors of the 4.7-inch hardware has been reported through the supply chain, this is the first time evidence supports a larger version of the entry level iPhone.”

This week saw a number of products launched by press release. Let’s start with the MacBook Air. Tim Cook and his team have finally replaced the butterfly keyboard on a 13-inch MacOS laptop. Alongside this welcome upgrade, the Air is the first MacBook to use Intel’s tenth-generation chip. Chris Welch reports:

“The new Air also offers double the performance, according to Apple, featuring 10th-gen Intel Ice Lake processors (Y-series) up to a 1.2GHz quad-core Core i7. And it delivers 80 percent improved graphics performance, as the Air now features Intel Iris Plus Graphics. It comes with twice the storage as the prior machine — now starting with 256GB. You can configure it all the way up to 2TB.”

More at The Verge. Curiously though, although the MacBook Air pricing tart at $999, Apple is also offering a $799 version, but you need to be able to get educational pricing. Why did Tim Cook and his team keep the price so high?

“Discounting the educational discount, a MacBook Air with 128 GB to customers could go on sale at $899. That would be one of lowest priced MacBooks in recent memory. It’s still a ‘high’ price so the luxury image of the hardware is only slightly diminished, but that $100 saving in price would bring in a larger potential user base.

“Apple’s changing focus to ‘services first’ requires as many users in its ecosystem as possible. Many will come from the iPhone and iPad, but the contribution of the MacOS user base should not be forgotten. Dropping the price of the MacBook Air would have opened up the laptop to a wider audience.”

Also announced, and taking as much of the limelight as possible, was a new iPad Pro. It picks up another iteration of Apple’s A12 architecture (here called the A12Z), improved microphones, and the aforementioned LiDAR addition to the camera. Yet Apple clearly believes that the MVP is the Magic Keyboard peripheral. David Phelan reports:

“A keyboard with a trackpad means that when the software is updated to iPad OS 13.4 (expected within hours) that there will be trackpad support so you have extra precision when selecting text, for instance. And the keys are backlit … The trackpad cursor is round, like your fingertip, until it transforms as context requires. You can pinch-to-zoom on the trackpad, too.”

More here on Forbes. How does it work in practice? Jason Snell takes a closer look:

“Apple says that most apps will work with this feature right out of the box, though there will probably be some quirks—there always are. But app developers will be gaining extra tools to let their apps specifically support the cursor if they want. (It seems that if apps implement nonstandard text fields, for example, they’ll need to make modifications to support the text-editing cursor.) I’m looking forward to remote-desktop apps like Edovia’s Screens supporting the cursor (if they can), and it seems like the iOS 13 feature of “desktop-class browsing” is going to gain support for cursor hovering, a concept that was previously incompatible with the iPad’s touch interface.”

A Minimum Viable Upgrade For The Mac Mini

Further down the fight card was the third update… the Mac Mini. Don’t expect much difference here, the computing power remains the same, but Apple has bumped up the storage. Mehedi Hassan reports:

“Cupertino is releasing a new Mac Mini with double the storage, so you can get more storage at the same price. The $799 variant now comes with 256GB of SSD storage, while the $1,099 variant comes with 512GB of storage. That’s a pretty decent update, but it’s surprising to see Apple not upgrade anything else on the Mac Mini considering the fact that it still features 8th-gen Intel processors released in 2017.”

Signs of a stretched supply chain are evident this week as online Apple Store orders were limited in the number of units they can order. Mike Peterson reports:

“Currently, there appear to be limits on new MacBook Air and Mac mini models with customers restricted to five per order total. For iOS and iPadOS devices, the limits appear to be a bit more stringent, with customers only able to buy two units each of 11-inch iPad Pro and 12.9-inch iPad Pros. The two-per-order limit also applies to every iPhone model Apple currently sells, from the iPhone 11 Pro to the iPhone 8.”