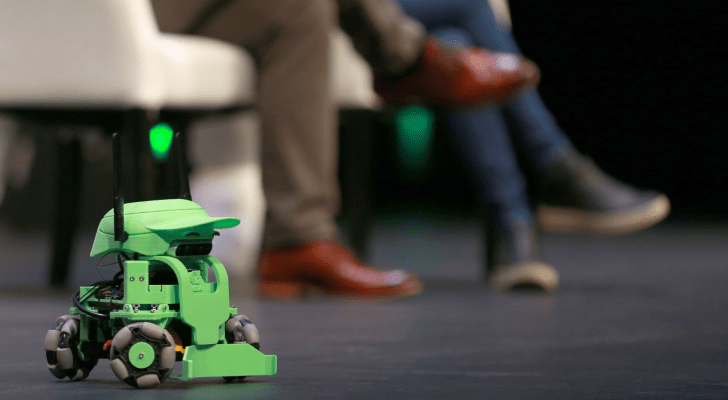 TechCrunch is returning to UC Berkeley on March 3 to bring together some of the most influential minds in robotics and artificial intelligence. Each year we strive to bring together a cross-section of big companies and exciting new startups, along with top researchers, VCs and thinkers.

Alongside a selection of hand-picked demos, we’ll also be showcasing the winners from our first-ever pitch-off competition for early-stage robotics companies. You won’t get a better look at exciting new robotics technologies than that. Tickets for the event are still available. We’ll see you in a couple of weeks at Zellerbach Hall.

General attendees can pick up their badges starting at 8:30 am at Lower Sproul Plaza located in front of Zellerbach Hall. We close registration at 4:00 pm.

The UC Berkeley professor and AI authority argues in his acclaimed new book, Human Compatible, that AI will doom humanity unless technologists fundamentally reform how they build AI algorithms.

Engineering for the Red Planet with Lucy Condakchian (Maxar Technologies)

Maxar Technologies has been involved with U.S. space efforts for decades, and is about to send its sixth (!) robotic arm to Mars aboard NASA’s Mars 2020 rover. Lucy Condakchian is general manager of robotics at Maxar and will speak to the difficulty and exhilaration of designing robotics for use in the harsh environments of space and other planets.

Amazon Robotics’ chief technology officer will discuss how the company is using the latest in robotics and AI to optimize its massive logistics. He’ll also discuss the future of warehouse automation and how humans and robots share a work space.

Join one of the foremost experts in artificial intelligence as he signs copies of his acclaimed new book, Human Compatible.

Can robots help us build structures faster, smarter and cheaper? Built Robotics makes a self-driving excavator. Toggle is developing a new fabrication of rebar for reinforced concrete, Dusty builds robot-powered tools and longtime robotics pioneer Boston Dynamics has recently joined the construction space. We’ll talk with the founders and experts from these companies to learn how and when robots will become a part of the construction crew.

Join this interactive Q&A session on the breakout stage with three of the top minds in corporate VC.

Select, early-stage companies, hand-picked by TechCrunch editors, will take the stage and have five minutes to present their wares.

As robots become an ever more meaningful part of our lives, interactions with humans are increasingly inevitable. These experts will discuss the broad implications of HRI in the workplace and home.

Autonomous driving is set to be one of the biggest categories for robotics and AI. But there are plenty of roadblocks standing in its way. Experts will discuss how we get there from here.

Join this interactive Q&A session on the breakout stage with some of the greatest investors in robotics and AI.

Imagineers from Disney will present state of the art robotics built to populate its theme parks.

This summer’s Tokyo Olympics will be a huge proving ground for Toyota’s TRI-AD. Executive James Kuffner and Max Bajracharya will join us to discuss the department’s plans for assistive robots and self-driving cars.

Join this interactive Q&A session on the breakout stage with some of the greatest engineers in robotics and AI.

In 1920, Karl Capek coined the term “robot” in a play about mechanical workers organizing a rebellion to defeat their human overlords. One hundred years later, in the context of increasing inequality and xenophobia, the panelists will discuss cultural views of robots in the context of “Robo-Exoticism,” which exaggerates both negative and positive attributes and reinforces old fears, fantasies and stereotypes.

Machine learning and AI models can be found in nearly every aspect of society today, but their inner workings are often as much a mystery to their creators as to those who use them. UC Berkeley’s Trevor Darrell, Krishna Gade of Fiddler Labs and Karen Myers from SRI will discuss what we’re doing about it and what still needs to be done.

The benefits of robotics in agriculture are undeniable, yet at the same time only getting started. Lewis Anderson (Traptic) and Sebastien Boyer (FarmWise) will compare notes on the rigors of developing industrial-grade robots that both pick crops and weed fields respectively, and Pyka’s Michael Norcia will discuss taking flight over those fields with an autonomous crop-spraying drone.

Robotics and AI are the future of many or most industries, but the barrier of entry is still difficult to surmount for many startups. Speakers will discuss the challenges of serving robotics startups and companies that require robotics labor, from bootstrapped startups to large-scale enterprises.

Unofficial After Party, (Cash Bar Only)

Come hang out at the unofficial After Party at Tap Haus, 2518 Durant Ave., Suite C, Berkeley

We only have so much space in Zellerbach Hall and tickets are selling out fast. Grab your General Admission Ticket right now for $350 and save 50 bucks as prices go up at the door.

Startup Exhibitor Packages are sold out!