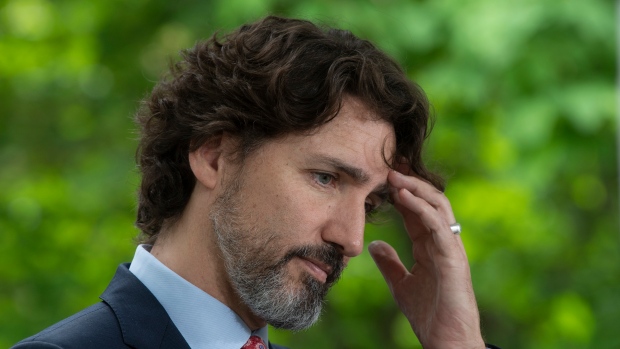 OTTAWA —
Prime Minister Justin Trudeau said the push for some members of the RCMP to use body cameras is just “one measure amongst many” that the government is looking at in its effort to address systemic racism.

His comments came just one day after he announced that RCMP Commissioner Brenda Lucki​ has agreed to outfit some officers with body cameras, as protests against police brutality and systemic racism in policing continue in Canada and around the world.

The idea of equipping police with body cameras has been criticized by some of the voices who are at the centre of the push against systemic anti-Black racism in policing.

“When we take a look at the research, it shows either that body cameras have no impact on a police officer’s likelihood to use lethal force and in some studies, shows that police officers are more likely to use lethal force when they’re using body cameras. We have all sorts of accountability measures already in place that the police do not respond to,” Sandy Hudson, the founder of Black Lives Matter — Toronto, said on CTV Question Period on Sunday.

“I don’t understand what seeing more of us die is going to do, if the police have already shown us that they are unwilling to change their practices.”

Trudeau said that in his discussion with Lucki​, body cameras emerged as “one of the things that people had been talking about.” He said that while he and Lucki have “concerns around the technology” and the “financial cost,” it became clear that the use of body cameras was an idea “that’s time has come.”

“But of course, it is only one measure amongst many, many things that we need to do to address systemic challenges in this country to racialized and Indigenous Canadians,” Trudeau said, speaking from the front steps of Rideau Cottage on Tuesday.

“There are so many different things that we need to look at as a country to take concrete action on, and that is something that we’re engaged with.”

While Trudeau did not explain what those “different things” are, he did say that the government is working with organizations and advocacy groups to “bring real action.”

The recent push to address issues of systemic racism has emerged after the police-involved killing of George Floyd, who died after a police officer knelt on his neck for over eight minutes. The officers involved have been charged, but protesters are continuing to call for action to be taken against the broader issue of systemic racism and police brutality against racialized people.

One of the key policies that Hudson and many others have advocated for is defunding the police, which means taking funds normally reserved for policing and redirecting them to establishing a service of people trained to deal with the mental health and service needs of people.

Still, Trudeau’s government is still moving forward in its push for increased body camera use. Public Safety Minister Bill Blair, who served as the chief of police in Toronto for 10 years, called the technology “an important tool of accountability” during a press conference on Tuesday.

“I believe that the presence of video evidence as can be made available under the right circumstances, following the appropriate policies, respectful of Canadians’ privacy interests, that that video evidence can provide the best possible evidence to help inform exactly what transpired,” Blair said.