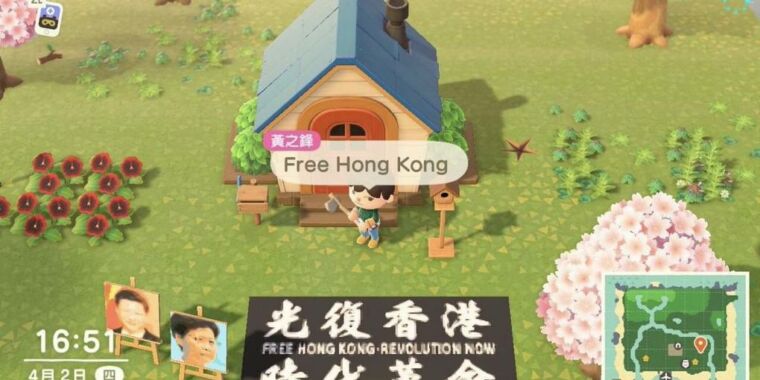 But Chinese players with imported systems can still get the game and play online.

Chinese online retailers are cracking down on third-party sales of imported copies of Animal Crossing: New Horizons. The move comes as the game has become a popular virtual spot for anti-government protests amid coronavirus-induced lockdowns.

Reuters reports that popular gray market Chinese e-commerce sites Pinduoduo and Taobao have taken down all listings for Animal Crossing as of this morning. Chinese tech site Pingwest reports that the two retailers sent messages to their resellers late Thursday notifying them of the ban. The Chinese government hasn’t issued a statement regarding the game, though a directive from government officials seems the most likely reason for the sudden move.

A licensed Chinese version of the Switch launched late last year through local partner Tencent after the lifting of an outright game console ban in 2015. That version of the system can currently play three Mario-themed games officially licensed for the Chinese market, as well as imported international Switch cartridges, but it can’t access the system’s online features.

But many Chinese gamers have taken to importing fully featured international versions of the system through online resellers. Import prices for those consoles, and for accessories like Ring Fit Adventure, have skyrocketed on Chinese retail sites in recent weeks, mirroring supply shortages in other markets.

As industry analyst Daniel Ahmad notes on Twitter, sites like Taobao have officially banned third-party sales of imported video games since 2017. But that ban is usually lightly enforced and only becomes operative if, as Ahmad puts it, “the game has content or user-generated content that is deemed to be too offensive or violent” or “the game has become very popular and caught the attention of regulators.”

No censorship on this island

Both of those issues seem to apply to Animal Crossing. In recent weeks, the game has become a popular virtual location for pro-democracy protesters who have seen coronavirus restrictions limit their ability to host crowded street protests. Offline players can create elaborate signs, clothing, and other imagery that can, and is, easily shared on social media, as you can see in the above gallery. Online players, meanwhile, can invite other users to their islands to take part in virtual protest actions in miniature.

“Animal Crossing is a place without political censorship, so it is a good place to continue our fight,” pro-democracy activist Joshua Wong told Wired UK earlier this week. “Even lawmakers in Hong Kong are playing this game,” he added.

While these online retail restrictions seem to be stricter than normally applied for the Chinese market, they fall well short of a full-fledged ban of the game. Imported systems can still download the title from Nintendo’s eShop by easily setting up an international account, and some brick-and-mortar retailers may also sell the imported cartridge. Some online resellers also seem to be avoiding the restrictions with listings that don’t mention the game by name in order to arrange a sale through private messaging.

China has not yet taken the more extreme step of blocking direct access to Nintendo’s online servers from the country. That would block downloads of Animal Crossing and other Switch games as well as online play for imported systems, though players could potentially get around that with a VPN. Such a major move could anger Chinese Switch gamers whose imports have been treated mostly with benign neglect thus far. It also could anger Nintendo and imperil the company’s lucrative arrangement with Tencent, which is sharing in millions of official console sales in the country.

China’s Ministry of Culture has long put forward restrictions on games that pose a “serious threat to the moral standards of society,” as it put things when banning Mafia-related games in 2009. More recently, pandemic-simulation game Plague Inc. was removed from the Chinese iOS App Store because it “includes content that is illegal in China as determined by the Cyberspace Administration of China.”